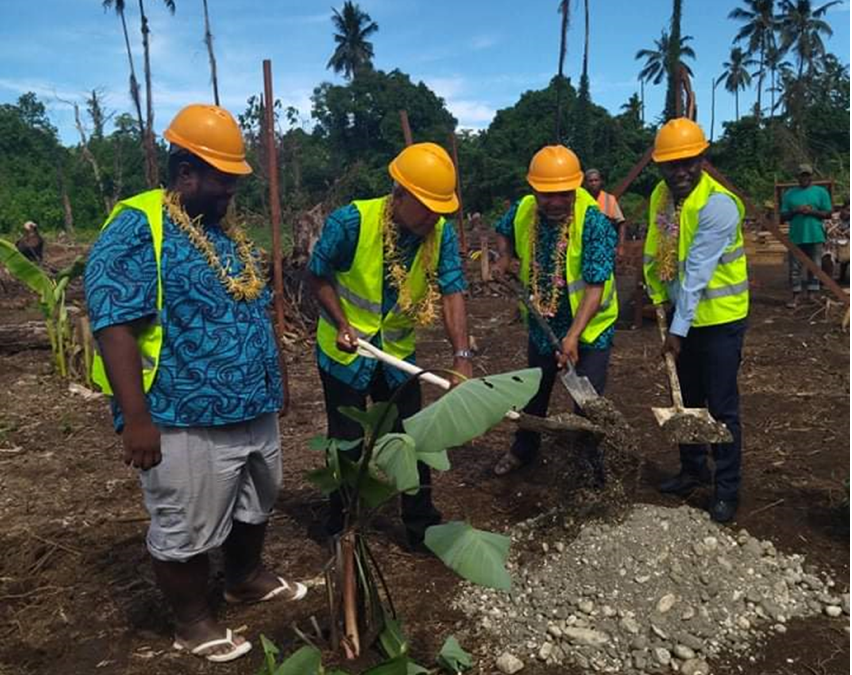 Farmers in Malaita province will soon have the capacity to produce taro products at a larger scale following a groundbreaking ceremony to start construction on a pack house in Adailiua in Central Kwara’ae constituency Friday last week.

The EIF is a multi-donor programme which supports Least Developed Countries (LDCs) in their efforts in promoting economic growth and sustainable development by addressing trade and trade-related constrains in order to build capacity to trade and take advantage of global trade.

Speaking during the ground breaking ceremony last week, the Trade Commissioner within the Ministry of Foreign Affairs and External Trade (MFAET) Mr Barret Salato said that the EIF program has been the trade development arm of the Department of External Trade under the MFAET since 2006 when it joined and launched its Diagnostic Trade Integrated Study in 2010.

Trade Commissioner Salato explained that the EIF ECAT, focusses on funding gaps identified in the agriculture sector, to enhance productive capacity for Solomon Islands to trade agriculture produce in the international markets.

The aim of the ECAT project is to help taro and cassava farmers reach a commercially viable level of production to export.

The Trade commissioner highlighted that the EIF project has provided 10 trainings for taro farmers in Malaita over the last 2 years.

“We also supported Goshen Enterprise with SBD100, 000 taro grant money and have distributed agriculture tools worth SBD 99,000 to taro out growers in both central and northern region of Malaita.

“The EIF also provided a tiller machine and facilitated the procurement of tractor and ploughing machine for Goshen Enterprises, Mr.  Salato said in his speech.

Trade Commissioner Salato added that he was proud to witness another milestone in the EIF support to taro farmers in Malaita.

“I have no doubt that this pack house will play an important part in boosting the livelihood of the taro farmers and their families here in Malaita when it’s completed”, Mr Salato added.

The ground breaking last week marks the beginning of the construction of the pack house which is expected to be completed before the end of the year.

This project is the second major infrastructure project to be funded under the EIF program in Solomon Islands.

The EIF program has also built and handed over a new office space for the National Public health Laboratory (NPHL) under the Ministry of Health and Medical Services.