The Ministry of Agriculture and Livestock (MAL) has been given the green light to pursue reviving of Land Purchase Cooperatives (LPCs) throughout the country.

This came after the convening of the “Land Purchase and Cooperative Society (LPCs) Consultation meeting” organised by MAL on the 14th of July 2020, with key stakeholders.

“MAL has appointed a Taskforce mandated to consult further with key stakeholders to discuss and update information and data gaps concerning the current situations of the LPCs to further advice the Ministry of Agriculture and Livestock on how it can best revive the LPCs.

“These LPCs are part of our agriculture sector history and described as ‘Dormant Resources awaiting to stimulate agriculture development in the Solomon Islands,” MAL Permanent Secretary Ethel Frances said.
Information from Land Use Division (LUD) at MAL highlighted that LPCs holds massive land area in most of the provinces, Choisuel, Western, Isabel, Central, Malaita, Guadalcanal and Makira Ulawa province but are now dormant since their glory days decades ago.

negotiate was what to do with the alienated plantation land owned by absent expatriates after independence. In particular, the alienated land holdings that were neglected and abandoned before and after the Second World War.

Key decisions on these land issues were agreed upon including the following; 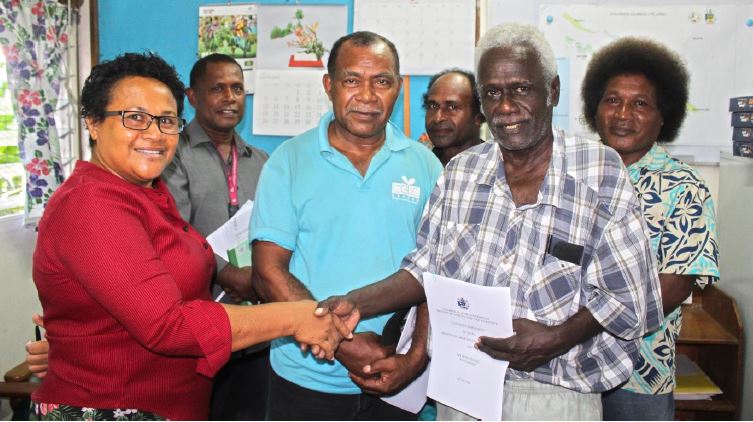 MAL Permanent Secretary, Ethel Tebengi Frances and Peter Rarahabura ,Director Planning Division (from back left) with local consultant after the signing of their consultant agreement contracts with the Ministry of Agriculture and Livestock.

The 3rd recommendations was taken up with support of loan from Development Bank of Solomon Islands (DBSI) who provided funds to members of the Corporative (LPC) to pay off the land. These Corporative took on the cocoa and coconut plantations operations as means of earning money to repay their loans and take possession of the land and plantations.

All of the LPCs succeeded in receiving their Fixed Term Estate (FTE) titles. Some of them progressed so well that they became models of community and agricultural farming for the country since their establishments. However there is limited information available regarding their operational status to date.

Following collaborations and consultations with key partner ministries like the Ministry of Commerce, Industry, Labour and Immigration and the Ministry of Lands, Housing and Survey, Office of the Prime Minister and Cabinet, key stakeholders and partners, MAL vision to pursue reviving of the LPCs was fully supported.

MAL Permanent Secretary Ethel Frances without wasting any time last week signed contracts with local consultants who were once MAL employees and assigned by MAL during their time as employees of MAL to work with the LPCs to carry out task of gathering important data, further consult stakeholders and propose to MAL strategies or ways it can effectively revive these LPCs as model to enhanced Agriculture Development in Solomon Islands. These consultants are a wealth of experiences in these LPCs.

Mrs. Frances said reviving the country’s LPC’s is in line with the current government policy of growing the economy, create jobs and better the lives of our people through the country.

“As a country, we know that agriculture sector has the potential to grow our economy and change the lives of our people but but have been depending on smallholder farmers who operates only on about a hectares of land or less The challenges of farmers getting large secured land to grow into large commercial farm is a huge hindrance to growing this sector and our economy”

“On top of that is dispute over land ownership because land in this country is own by tribes and very little by families,” she said.

The Permanent Secretary further added that it is only fitting that we tapped into reviving the LPC’s because these are large registered land that are being held under the LPC’s with potential for us to introduce commercial agriculture development.”

“LPCs are dormant resources that can be awakened through focused investments of resources through a Public and Private Partnership (PPP) that could revive the agriculture sector much quicker due to more effective and efficient delivery of support services that will result in better returns for resource investment in socio-economic returns against time.

“We hope we can rekindle the interest of the LPC members to engage again in mass production of agriculture produce around the country,” Mrs. Frances said.