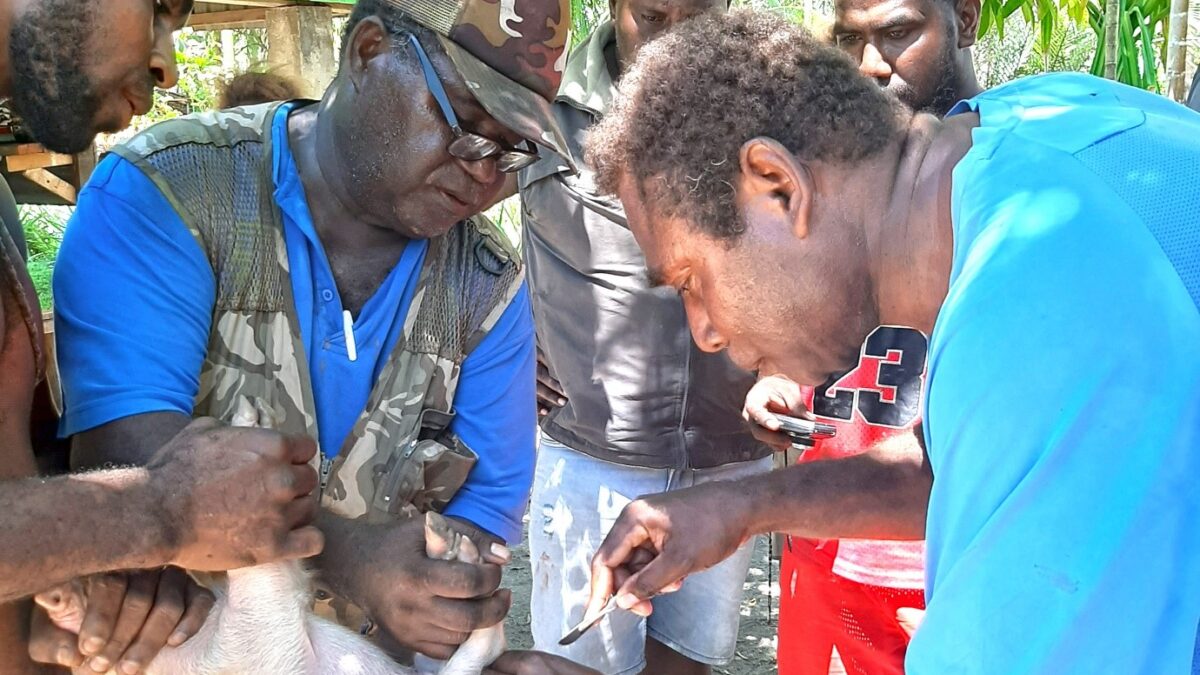 The team provides animal health services with castration as depicted in this picture.

MAL: Poor husbandry practices behind death of 21 pigs at Aola

The Ministry of Agriculture and Livestock (MAL) through its Livestock Department has ruled out any African Swine Fever (ASF) incursion in the country but confirmed death of 21 pigs at Aola communities in East Central Guadalcanal was related to poor pig husbandry and management practices by farmers.

This was after a six-member team from the ministry’s Livestock Department and Biosecurity Department attended and investigated reports of pigs and piglets being sick and die-off from some farmers at the region on 17th April 2021.

Deputy Director of Livestock and Veterinary Services of MAL, Hearley Atupule who headed the team said the swift response was taken as part of the ministry’s alertness and preparedness to contain any possible incursion of ASF in the country.

“ASF is not present in Solomon Islands at the moment, but there are reported cases recorded in Papua New Guinea (PNG) which is a great concern to us and we must not take it lightly but always stay cautious and take required measures to ensure the country’s pig industry is protected from the virus-related disease. ASF is not a risk to human health.”

Mr. Atupule said his team attended and investigated the reported cases and established that the infections and deaths were caused by animal welfare, through poor husbandry and management associated to poor housing, feeding and water, animal health issues and lack of knowledge by farmers in handling and raising of their animals to support their livelihood.

“The cause of sickness and some death were resulted from high level of both internal and external parasites affecting the animals (pigs). 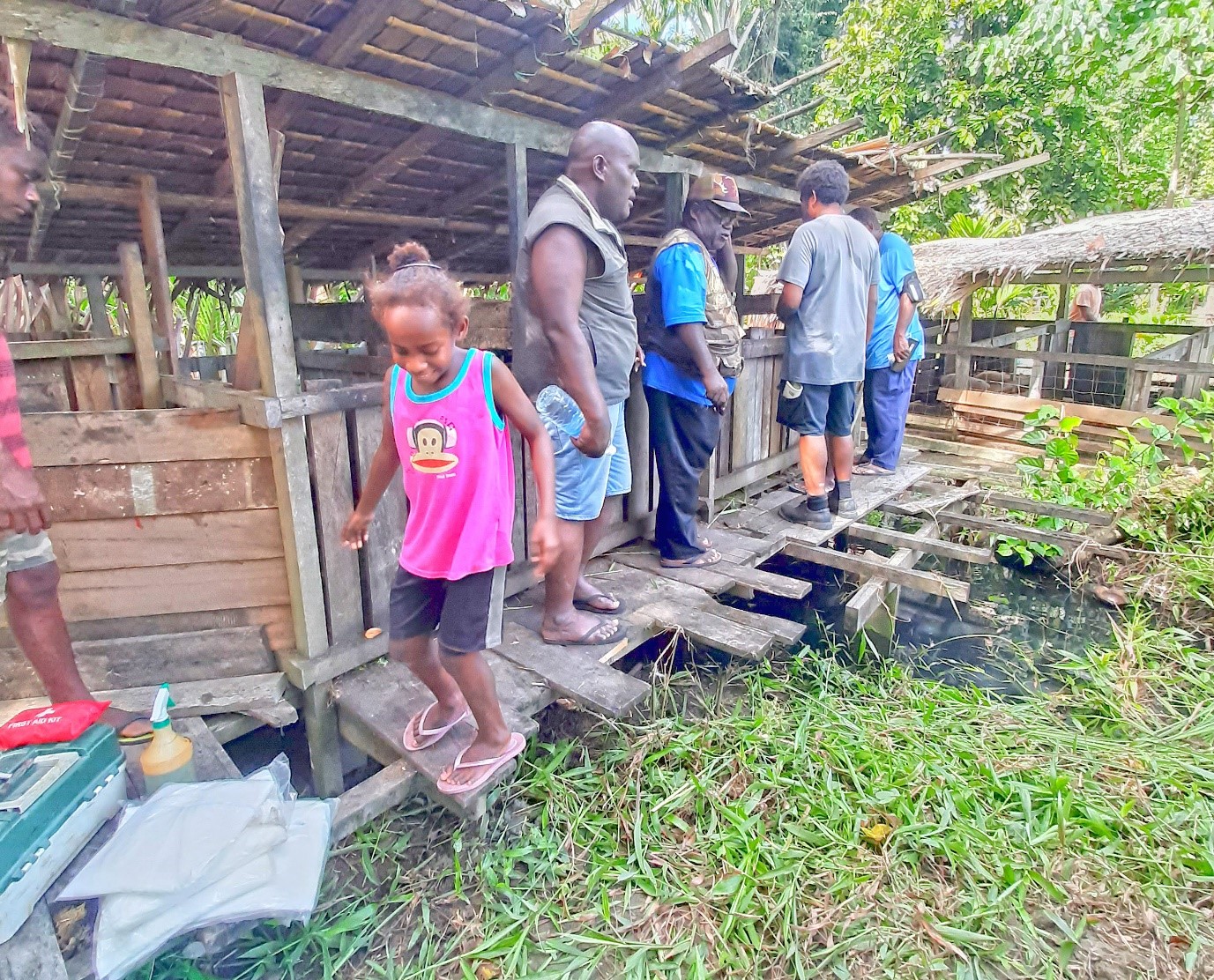 The livestock and Biosecurity team at Aola. 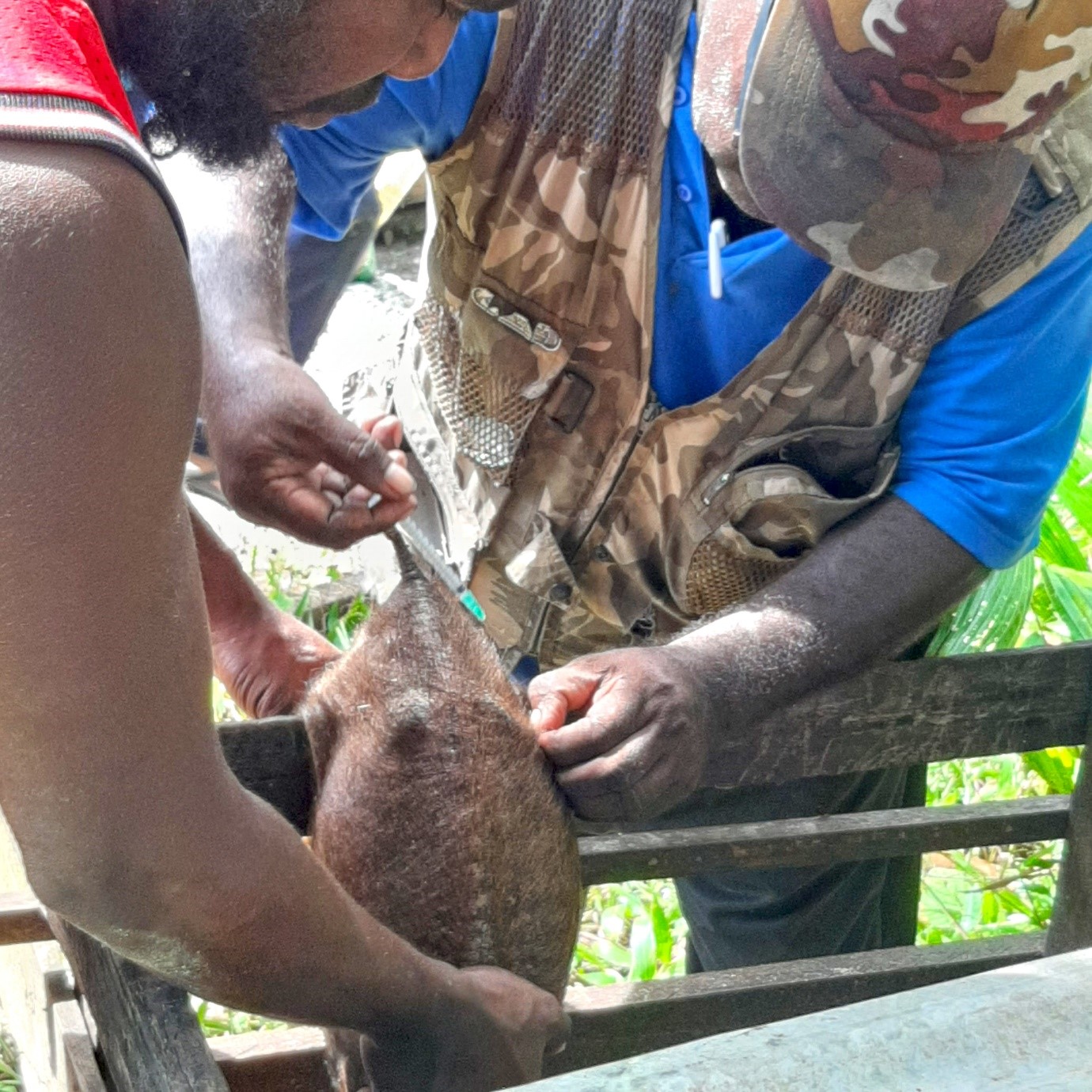 The team provided an anthelmintic and antibiotics drugs injections to sick pigs.

“These are also associated with poor feeding and the conditions where the animals were confined in. The smaller animals were also susceptible to extreme weather conditions such as heavy rain, wind and high humidity, thus the piglets were getting pneumonia, slow growth, diarrhoea and other health issues, that may cause their illness and eventually resulted to the deaths. We also gathered information that apart from four farmers interviewed, there were also other farmers who experienced the same incidence. The signs and symptoms that were reflected by the farmers and evidences that we saw from the animals examined and diagnosed does not support the presence of African Swine Fever (ASF) in the region or community. Therefore our response team collectively declared and ruled out the incursion of African Swine Fever (ASF) from the cases that were reported,” Mr. Atupule explained.

The team also provided general animal health services to the farmers there which include; anthelmintic and antibiotics drugs injections, castration and removal of needle teeth to young piglets. An awareness talk on the ASF and the importance of Biosecurity including the current ban on importation of pork into the country was also delivered to the community farmers by the team.

MAL through its livestock department is sketching plans to organise a training for farmers in the region in due course.

However, as part of MAL’s commitment to certain ASF not enters the country, the government through the ministry of agriculture banned pork products except for few approved importers importing meat into the country from Australia only with strict importation rules.

According to World Organisation for Animal Health, African swine fever (ASF) is a severe viral disease affecting domestic and wild pigs and is responsible for serious production and economic losses.

“This transboundary animal disease (TAD) can be spread by live or dead pigs, domestic or wild, and pork products.

“Furthermore, transmission can also occur via contaminated feed and fomites (non-living objects) such as shoes, clothes, vehicles, knives, equipment etc., due to the high environmental resistance of ASF virus.

“Historically, outbreaks have been reported in Africa and parts of Europe, South America, and the Caribbean. More recently (since 2007) the disease has been reported in multiple countries across Africa, Asia and Europe, in both domestic and wild pigs,” the Organisation stated.