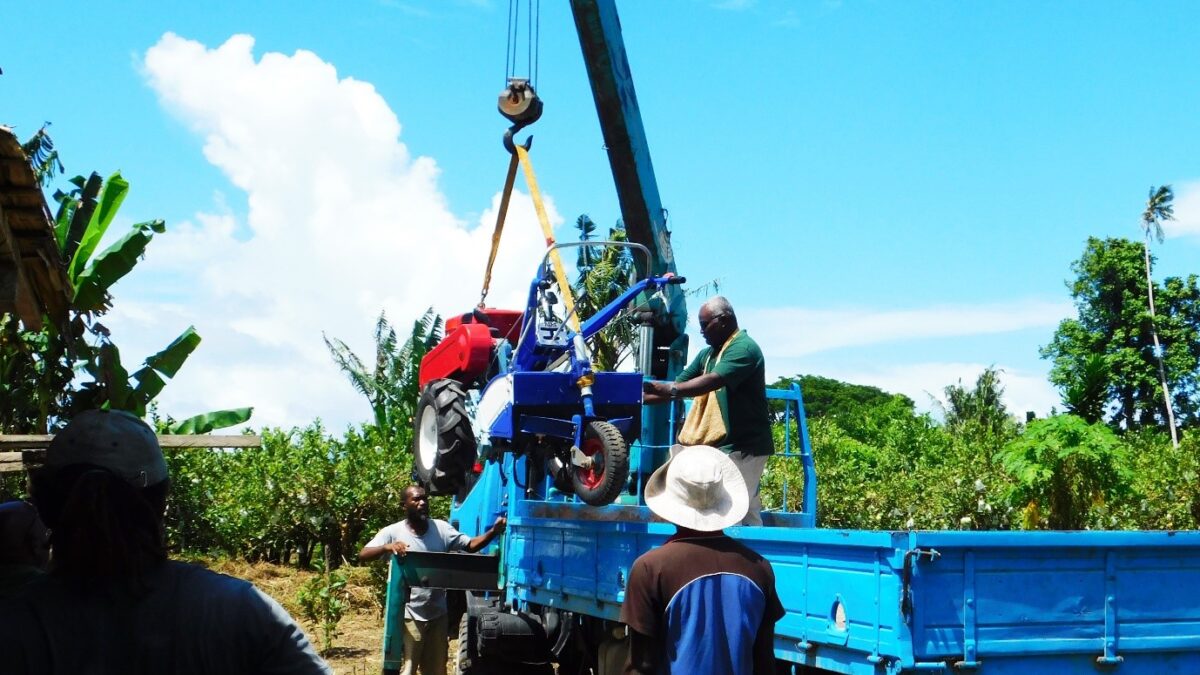 Mr. MacDonnell Hiva, MAL, Coordinator National Agriculture Livelihoods Improvement & Export Based Expansion (ALEBE), seen standing inside the truck assisted by workers as they try to lower the machine at the farm site.

The Ministry of Agriculture and Livestock (MAL) through its Guadalcanal Province Extension office has delivered a Power Tiller machine to MK Farm Fresh at Takaboru Community, Northwest Guadalcanal on Tuesday 23rd February.

The power Tiller was purchased by UNDP for the Model Farm Program under MAL’s National Food Security and Enhancement Program for 6 Provinces including Guadalcanal.

The assistance is expected to boost farming activities and productivity to ensure households and communities have access to nutritious food supply.

“An official handing over will be arranged to coincide with a demonstration day to train farm workers on how to operate the machines. The support is expected to boost farming activities and to ensure the Model farms are developed further into commercial farm to achieve its aims and objectives,” Chief Field Officer (CFO) for Guadalcanal Province MAL, Agriculture Extension office, Mr. Joseph Wotomaru said.

He said the Model Farm is a sub component of MAL’s National Food security and Enhancement program aimed at Promoting and assisting vulnerable communities to improve Food and Nutritional status to ensure every households have access to nutritious food to promote healthy and happy family and to reduce increased cases of Nutrition Disorders in Solomon Islands.

He stated that other farming issues to be addressed under the project to ensure sustainable production of nutritious food readily available in target communities include:

MAL through its Guadalcanal Extension office and the Ministry of Health, Guadalcanal Province Health Authority is implementing the programme to improve Nutritional Disorders in Guadalcanal by promoting and delivering the following activities;

“MAL in collaboration with UNDP Solomon Islands under the Governance for Resilient Development in the Pacific Project (Governance Resilience) train the beneficiaries on risk management. The Model Farm Projects is being implemented in six provinces which include; Makira, Isabel, Central Islands, Choiseul, Western and Guadalcanal province.

“This means farmers with support of MAL officers will need to acknowledge certain risks which might impact the success of the farms in each province, and design management measures to mitigate these risks. Doing so will enhance the resilience of the model farms in the face of climate change and disaster events, as well as ensuring that they meet the needs of all people in the community including youth, elderly, and all genders,” MAL Guadalcanal Province CFO, Mr. Wotomaru stressed. The machine now delivered at MK farm site. However, a proper handing over ceremony will be arranged at a later date to coincide with a demonstration day for farm workers on how to operate the machine.

At the same time Mr. Wotomaru acknowledged MK Farm Fresh for taking on board the initiative and for its continuous engagement, promotion and production of nutritious food crops to support food security in the country.

He then thanked MAL and UNDP for the support and for choosing MK Farm Fresh as the recipient of the machine and tools under the Model farm project.

Mr. Maeli is a popular person and one of the suppliers of Guava fruits and vegetables to the Honiara markets. He planted over 10,000 guava trees. Most people (resellers) usually buy guava fruits from his farm and resell it at markets in Honiara. He involved in intercropping farming.