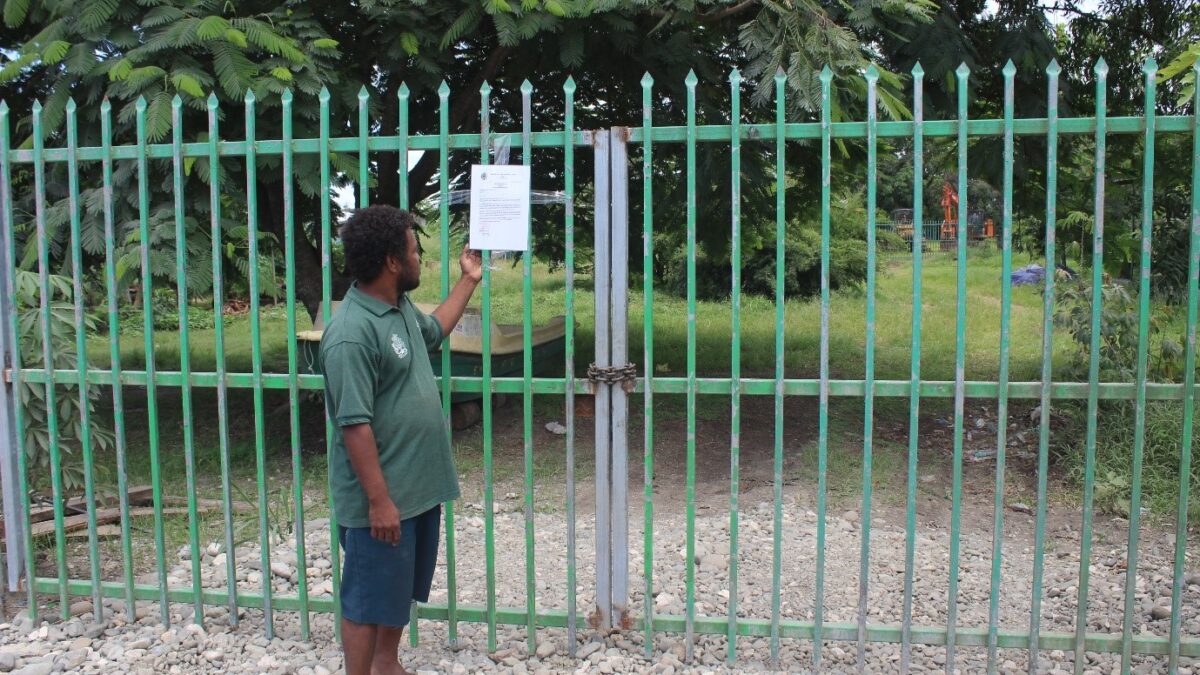 Biosecurity officer, Jack Susulu read the notice of resumption pinned up at the main access gate that Excellent Resources Management Limited heavy machineries and vehicles use to enter through the Biosecurity land.

A quick action by the Commissioner of Lands (CoL) Mr. Alan Mcneil to take back (resume) the land at Ranadi sold by Honiara City Council (HCC) to Excellent Resources Management Limited an Asian Company for Biosecurity work is highly commended.

This follows a request by the Ministry of Agriculture and Livestock (MAL) to resume the land for biosecurity waste disposal.

MAL expressed the gratitude after a Notice of Resumption was served by CoL to the new owner, Excellent Resources Management Ltd this week (Tuesday 16th March).

“In accordance with Clause 3 of the Grant, the Grantor (Commissioner of Lands) has the right, on giving one month’s notice in writing to the Grantee, to take back such portion of the land that may be needed for roads or other public purposes. Since the FTE has been transferred to you, this right of resumption can be exercised over your FTE.

“The whole of Parcel 191-010-033 is required for the purpose of biosecurity quarantine incinerator. As such, I am hereby giving you one month’s notice that the FTE over this parcel is to be resumed for this public purpose. You are required to do all things necessary to allow the Grantor to take back possession of this land.

“Compensation will only be paid for actual loss sustained in respect of improved land, otherwise compensation is not payable if the land has not been developed.

“Thank you for your cooperation in this regard,” end of notice of resumption.

The issue of the sale made headlines in the media last week with heated debate on social media platforms by citizens after MAL publicly condemned HCC’s disrespectful action to sell off the piece of land that housed MAL Biosecurity Incinerator without consulting MAL.

The land is used by Biosecurity for destruction of all garbage remove from international vessels and aircraft coming into Solomon Islands.

Permanent Secretary Mrs. Ethel Tebengi Francis said the prompt action taken by Commissioner of Lands on MAL’s request to resume the land at Ranadi for biosecurity work is a welcoming news for her ministry (MAL), so she on behalf of MAL wish to thank the Lands Commissioner Alan for seeing it fit to take this action.

She said the piece of land is crucial to biosecurity treatment and disposal work as it serve public interest and the national security of the country during this Covid-19 pandemic as wastes from flights into the country poses a huge threat.

Director of Biosecurity of MAL, Francis Tsatsia earlier said, “It’s a requirement that Garbage of this sort must be offloaded and incinerated as biosecurity risk is very high. Normal garbage for incinerator in this premises are plants and plant products and animal and their products.

“The area is best suited for BSI operation. It’s away from residential properties and has good security fencing. MAL has invested a lot of money for treatment facilities of imported products not meeting SI standards. The area was to house the first abattoir in the country but the house was not completed and well suited for an abattoir so was then decided to be used for waste disposal thus the incinerator so MAL has been using this land for over twenty years. Facilities here include a building for chemical storage, a room for animal product treatment and an incinerator for general garbage disposal.