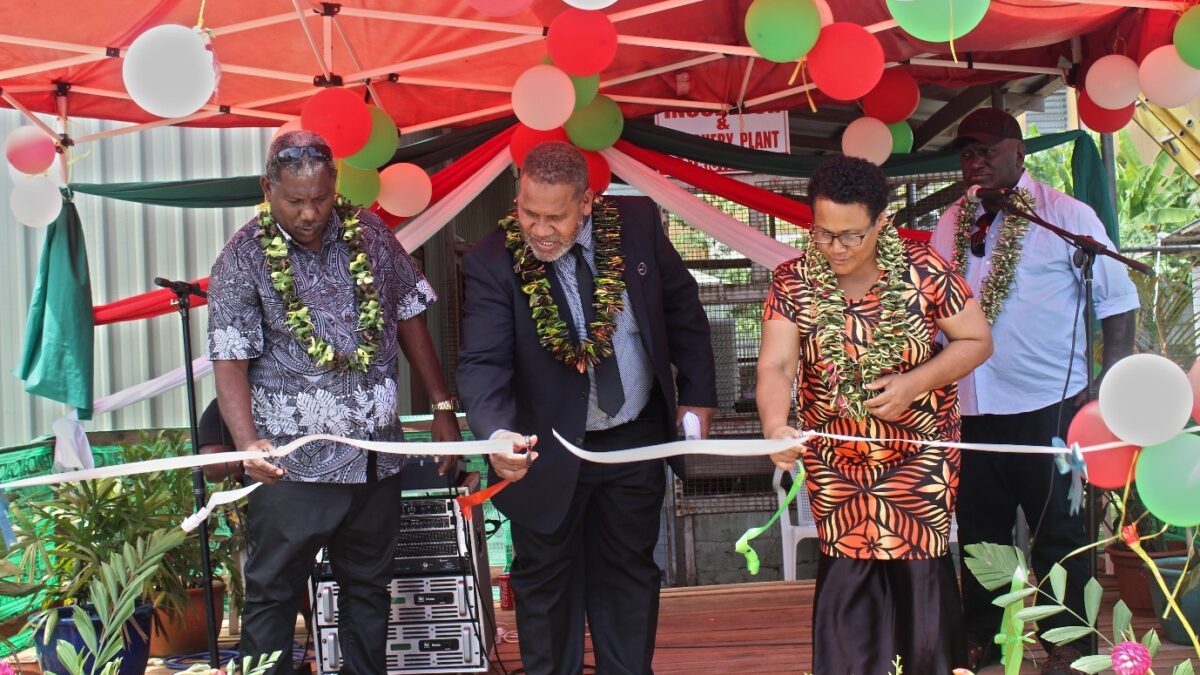 The Ministry of Agriculture and Livestock (MAL) through its Public Private Partnership (PPP) agreement with Foodworks Suppliers Limited has made another landmark achievement after both parties launched the Hatchery & Stockfeed government funded project on 30th November 2020.

This came as the result of the 2.4 million funding support agreement that MAL and Foodworks Suppliers Hatchery & Stockfeed Ltd signed in May this year for the establishment of hatchery and feed mill services.

The event was filled with excitement as poultry farmers collected their day old chicks and stockfeed straight after the official launching.

Speaking during the event, Minister of MAL, Hon. Senley Filualea said early this year the Ministry signed two historic project support worth more than $2million each for the mass production of cassava and for hatchery and feed mill to increase supply of day old chicks and feeds. 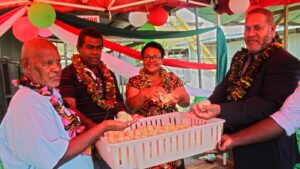 “These two support are complementary in that, the cassava production is not only aimed at exporting but for production of feeds for chicken and pigs,” Hon. Filualea said.

The Minster congratulated Foodworks Ltd for the milestone achievement.

“I am so proud to declare to our people around the country that in just the same year we deliver. And so I wish to congratulate and share my appreciation to these two partners, especially Foodworks Supplier, for this milestone achievement.

“This year we saw the export of cassava by Varivao in partnership with Sape Farm out-growers and today we are here to launch the achievements of our Support to Foodworks Supplier with the first batch of day old chicks to come out of Foodworks Supplier Hatchery.”

Hon. Filualea said his ministry is custodian of many DCGA policies which Foodworks Suppliers hatchery services will help achieve through creation of income generating opportunities for our people to;

He said the launching of the Foodworks Suppliers hatchery & Stockfeed is a great achievement. 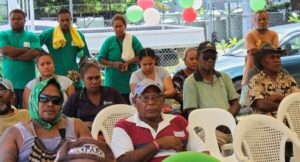 Poultry farmers during the launching event.

Foodworks Suppliers Ltd Managing Director, Tony Tepe said the launching of the MAL funded project is indeed a milestone achievement for the DCGA as the responsible government.

He said Foodworks Suppliers Ltd is a new and infant company yet with the government support through the MAL Public Private Partnership agreement, enabled the business to expand its operations into hatchery and stockfeed.

Mr. Tepe thanked the unwavering support rendered to Foodworks Ltd by the government in formalising the PPP agreement to revitalise and nurture the poultry industry.

“This is a simple and tangible manifestation of the government (DCGA) bottom up approach that put its very own people first and foremost its very own poultry farmers in the rural areas.”

Mr. Tepe assured that his company will do all it can within its means and ability to grow the production side of the poultry industry to meet expectations of local poultry farmers by improving easy access to quality and affordable day old chicks and stockfeed.

“Operation cost is always the main challenges which include, importation charges, tax, high electricity and water bills and administration.”

Despite those challenges, Mr. Difeni believed in partnership as a way forward to grow the poultry industry and find solutions to address the high cost of the feed price and market access.

Mr. Difeni thanked all poultry farmers for their collaborative work with Foodworks Ltd through the years despite challenges faced.

“I am optimistic if we can work in collaboration in the coming years, nothing can stop us from achieving our goal.” 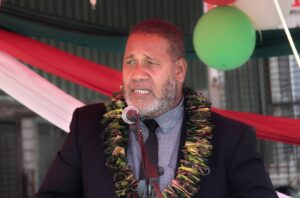 Speaking on behalf of poultry farmers, Clement Wanefiolo, Vice Chairman of the Poultry Farmers Association acknowledged government support through MAL toward the success of the project.

He said such support like this will definitely boost the poultry industry.

“Let us all work collaboratively in this initiative to ensure we go commercial and industrial in the future to grow the economy and at the same time ensure farmers benefited from such government support or funded projects.”

Mr. Wanefiolo also thanked the government, stakeholders and everyone who are working tirelessly toward success of the hatchery & stockfeed project.

The Permanent Secretary of the Ministry of Agriculture and Livestock Mrs. Ethel Tebengi Frances was just as excited as the farmers because she sees a future not only for poultry farmers but MAL supporting our trade deficit which is now at its lowest.

She said that “if we are able to keep export receipts in the country, it will stimulate domestic food production and the poultry industry is one which this can be best achieved.”

PS Frances said that for last year alone, the value of poultry products imported into the country was more than $80million. “You add the costs of day old chicks, chicken feeds we are talking about $200million dollars of export receipts that are going out to poultry farmers in other countries when it should go to our own people.

“I am looking forward to the day when we will see our own locally made products on the shelves competing with overseas products.”

PS Frances in her closing remarks urged Foodworks Suppliers Ltd management to make this work for our people and also appeal to farmers to take advantage of this opportunity to increase their production and go commercial as this country will need that level of production.