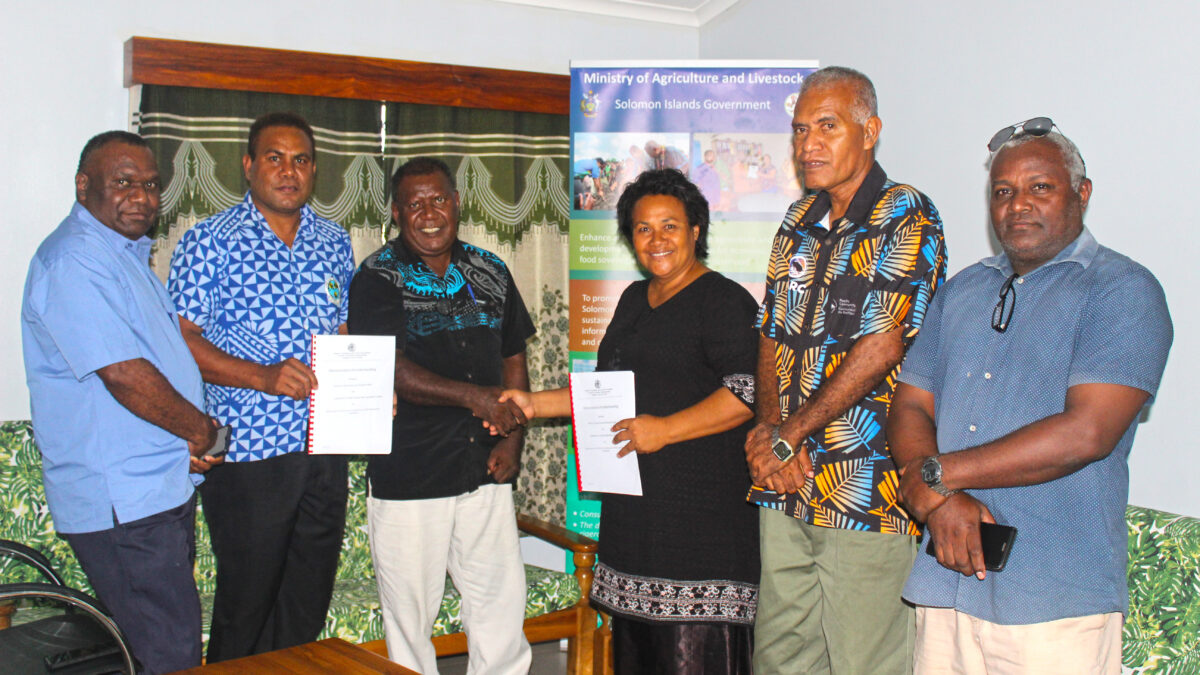 The Ministry of Agriculture and Livestock (MAL) on 6th August signed a Memorandum of Understanding (MoU) with the Commodity Export and Marketing Authority (CEMA) one of the country’s State Own Enterprise for the implementation of the government policy redirection on its revitalization programme.

The objectives of the agreement is to ensure smooth facilitation of MAL’s support to CEMA’s implementation work plan 2021 and to strengthen the partnership between both government agencies (MAL & CEMA) in the areas of quality assurance and development of relevant regulations on emerging commodities/cash crops.

Under the signed agreement, MAL will provide grant support of $640,000.00 into CEMA’s consolidation funds so that the activities are effectively implemented as scheduled as well as collaborate with CEMA in the implementation of its activities in the provinces through the Provincial Agriculture Extension services (PAES).

The MoU is valid for one year period with grant support to be expended under two focus areas which include; to conduct 12 quality assurance trainings to commodity farmers and to produce two cash crops regulations.

She said MAL is aware of the DCGA plans now progressing well to revitalise CEMA so MAL is ready to support implementation of this revitalisation plan and looking forward to a more comprehensive MOU with CEMA and the Ministry of Commerce to roll out this plan.

She said that MAL really want to see CEMA operate successfully for farmers around the country.

Patterson Siliota, General Manager of CEMA while acknowledging government through MAL said the assistance will go a long way in achieving one of the government’s key objectives in keeping our economy afloat in these trying times.

“I would like to thank SIG through MAL for the allocation of $640,000 from its Development Budget that will support CEMA in implementing the DCGA government policy of CEMA Revitalization and Recapitalization. The support will assist CEMA in conducting 10 QA training for cocoa and coconut farmers throughout the provinces. Out of the 10 trainings, two cocoa trainings will be held in Isabel and Temotu provinces, since these two provinces have yet to host any cocoa QA trainings in the last 2 years where CEMA had conducted cocoa trainings for farmers in our provinces (towards registering the cocoa fermentries). Eight trainings will be on coconut (copra) QA trainings targeting all provinces except Renbel and Honiara,” he said.

Mr. Siliota said the trainings will boost the capacity of our farmers in producing good quality commodities for the purpose of domestic and exports markets. “For copra it will be an eye opener for most of our farmers because CEMA had not been able to conduct copra QA training for the last decades due to its limited revenues since the liberalization of CEMA. Also, the new generation of copra farmers had no access to such training unlike the past copra farmers who have attended such training in the past conducted in collaboration by CEMA and MAL in the 1980s and 1990’s (Agriculture Training Centres in the past).”

He said another component of this support is the drafting of two new Regulations namely Palm Oil and Noni to enable CEMA as the Regulator to be able to regulate the activities of the industries as required by the CEMA Act. “This will allow us to issue licences to the processors and exporters as well as establishing quality assurance systems for these industries and obtaining data on the production, processing and exporting of these commodities.”