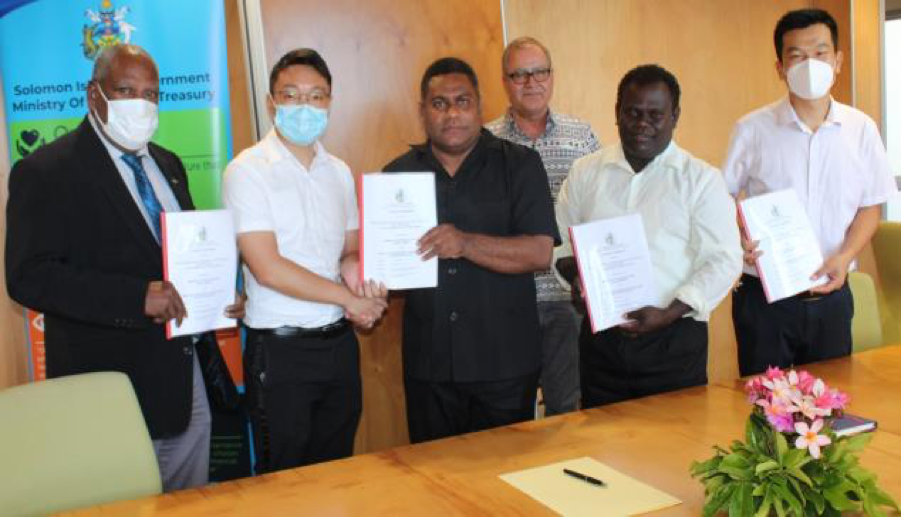 The Minister of National Planning and Development Coordinate and Supervising Minister of Finance and Treasury, Hon. Rex Ramofafia, formally concluded the contracting agreement process with the international contractor, China Civil Engineering Construction Corporation or CCECC, today, 31st May 2022, to commence the construction of major road work in Honiara and Guadalcanal.

An international tender process for the first phase of the Land and Maritime Connectivity Project (LMCP) was supervised under the Asian Development Bank or ADB and a contract has recently been awarded to CCECC. The contractor is currently mobilising with initial activities are expected to commence within the next 2-3 months – works include improvements to road drainage, longer lasting asphalt surfacing, together with road signs, markings, bus-shelters & street lighting, and are expected to be completed in time before the 2023 South Pacific Game.

The major component of the first phase will involve a major improvement to roads around Honiara that includes improving and extending the existing 4-lane road, from the central market through to White River (approximately 5 km), as well as the 2-lane road from the Airport to Mberande (approximately 30 km).

At the handover ceremony, Minister Rex revealed that the DCGA Government has recognises the provision and improvement of National transport infrastructure is crucial in promoting corresponding improvements to the social and economic development of the Solomon Islands and identified the need for action to be taken in respect of major roads, wharves & port facilities within both the main urban centres and outlying rural areas. The minister further revealed that to facilitate this comment the Government have arranged financing amounting to approximately USD 170 million, with assistance from the ADB, for improvements to selected infrastructure, that include roads & wharves in and around Honiara as well as in the provinces of Makira and Rennell & Bellona. The second phase of the LMCP project will include 2 domestic wharfs in these provinces and the rehabilitation of the international Wharf in Honiara.

Minister Rex finally expressed his gratitude and confirm that the impact of the project, once complete, will be to contribute to a more efficient, safer and sustainable transport system that will improve access to education, health and social service facilities as well as offering increased opportunities to local businesses and general improvement in the overall wellbeing of the people of the Solomon Islands. The Minister also conveyed to the contractor the DCGA Government stand to complete the West Honiara main road, from Central Market to White River by the 4th quarter 2023.

In respond to the Minister’s statement, CCECC country Manager, Mr. Huang Pengfei also recognized the importance of the project as the country prepares to host the 2023 Pacific Game. Mr. Huang revealed that CCECC operates in the country for almost 6 years, with its established plants, equipment, machines, expertise and familiar with the Government rules and regulation. Huang also confirmed that they will utilize local resources and will strictly implement the project to ensure that they deliver a high-quality infrastructure and on time as requested by the Government.

Both the Minister Rex and Mr. Huang thank the ADB for the high-level management of the design and oversees the procurement of the project.