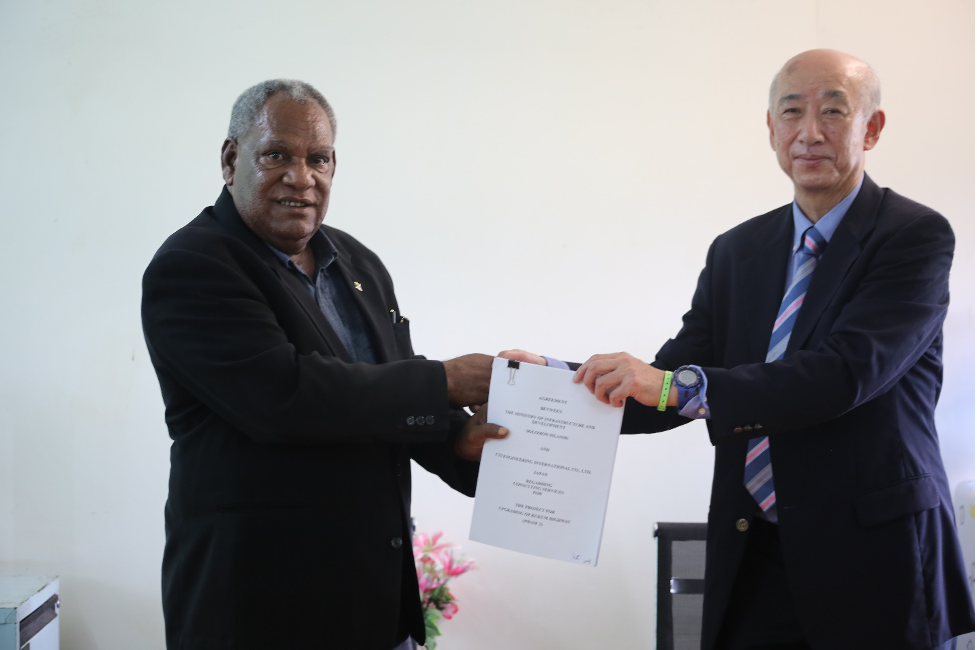 A consultancy agreement to begin consultancy services on phase two of the Kukum Highway project was signed in Honiara today (02 February) between the Solomon Islands Government and the CTI Engineering International Co. Ltd of Japan.

The Phase two of the road improvement project will start from section at the Ministry of Fisheries Head Office to Honiara international airport and is expected to complete before the 2023 Pacific Games.

The agreement formally paved the way for CTI Engineering International Co., Ltd to start work on the design, supervision and monitoring of the project.

Representing CTI at the brief signing ceremony at the Ministry of Infrastructure Development was Masatoshi Shibata who is the Senior Chief Engineer of CTI’s Project Management Division. 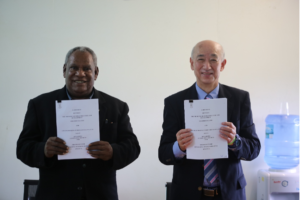 PS Maesiola and Mr. Shibata at the signing ceremony

The Senior Chief Engineer added that CTI’s service of contract would continue for a year after the completion of the road construction- in the year after the project completion CTI will assess the defect liability of the project. CTI will check for defects on the road and report to the contractor to fix if there are defects.

Masatoshi Shibata revealed that due to 2023 Pacific Games, CTI aims to identify a contractor for the project at the end of June this year.

Shibata urged MID as the client to ensure that the ministry is cooperative in meeting its obligations such as ensuring that utilities are relocated, any obstructions within the road are removed to allow the construction to start.

Director of Civil Engineering in the Ministry of Infrastructure Development Mike Qaqara described the signing of the consultancy agreement as a milestone achievement in the process of starting the phase two-road project.

Mr. Qaqara added that the signing binds CTI to put together design works, bidding documents and afterwards a public announcement for tender.

Mr. Qaqara however agreed that MID must ensure that it fulfils its obligations so that by June a contractor will be identified.

Permanent Secretary Stephen Maesiola represented government. PS Maesiola reaffirmed that the signing marks another progress in the realization of Phase 2 of the project.