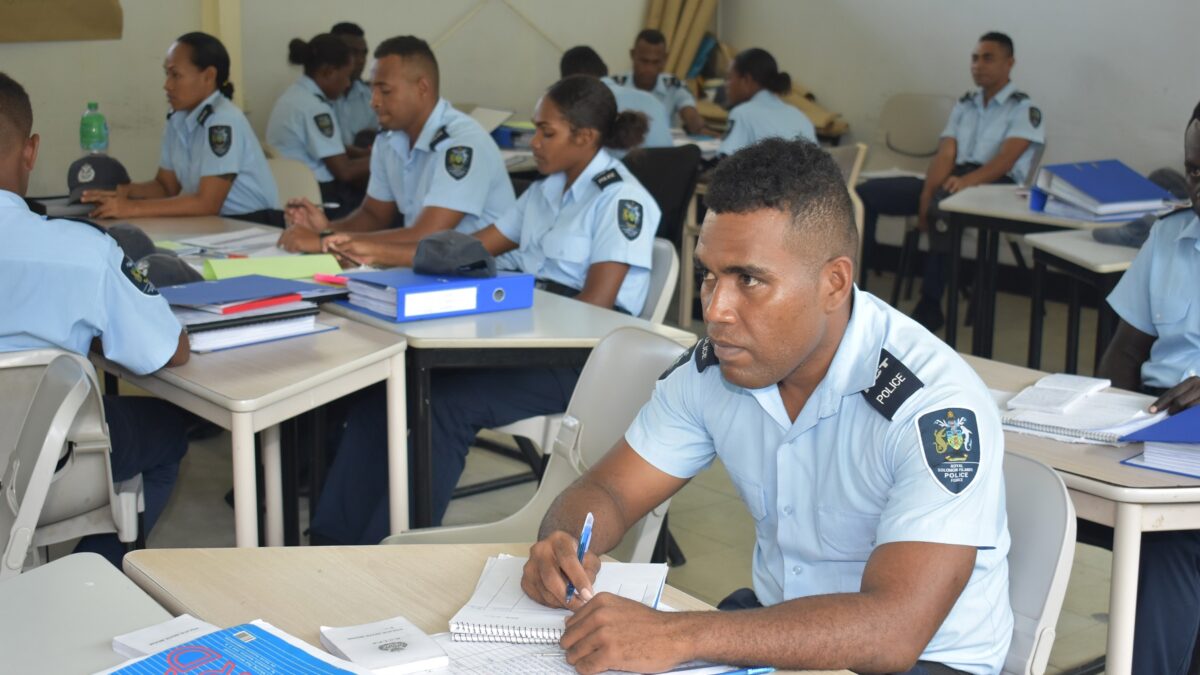 “Joining the RSIPF is a great privilege” – RCT Tuanivalu

Twenty eight-year-old Nivaldo Esdale Tuanivalu who hails from Bemuta Village in Guadalcanal Province is one of the 47 male recruits into the Royal Solomon Islands Police Force (RSIPF) out of the 70 participants in the second group of recruits for this year at the Police Academy at the Rove Police Headquarters in Honiara.

“My desire to join RSIPF is to serve my people, my community and the country as a whole. I did not hesitate to apply when I saw the police recruitment advertised. I am very fortunate to have been selected out of the several hundred applicants,” says Police Recruit (RCT) Tuanivalu.

“With only a few weeks into the recruit training course, I have learnt so much about the duties and responsibilities of being a police officer. Discipline is at the forefront of the characters that will mould me into a professional and ethical police officer. A fine example is learning the RSIPF code of conduct, this code is a moral guide used by recruits, RSIPF members and the civilian staff members, which surprised me a lot seeing people paid full respect to each other in an uttermost manner and integrity.”

RCT Tuanivalu says, “Members of the public must understand the duties and responsibilities of an officer. It is basically sacrificing a job in your life for the country 24 hours and seven days a week.”

“We blame the police for everything that could go wrong in our communities. Yes, the police are there to ensure the public is safe and there is no crime. However, we should also know that the police could not do this alone. It is therefore our responsibility to assist the police to prevent crime from our communities. It’s everyone’s business.”

Mr. Tuanivalu says, “As I joined the force, I came to realise that this organisation is one of the well-organised organisations within the government sector. Nowadays police is not a compulsory job where anyone can apply or join the force while reaching any lower forms of education as to date requires people with higher educational background with good academic transcripts. Those are the requirements and you can be selected on merit to join the force. This is part of professionalism practiced within the organisation.”

“I want to put across a message to all the youth across the country who were well educated but still left unemployed to stop thinking negatively but used all challenges they faced as a stepping stone to counter all those obstacles. “I invite all young men to join me and become an officer of the RSIPF not only as a job but also with the passion to help everyone, not only the police but to prevent crime from our beautiful shores,” RCT Tuanivalu adds.

“I know there will be challenges during this training but I will give it all I have for what I decide to do as my career and am proud to be one.”

RCT Tuanivalu completed his Form six at the Honiara High School in 2013. He plays football.