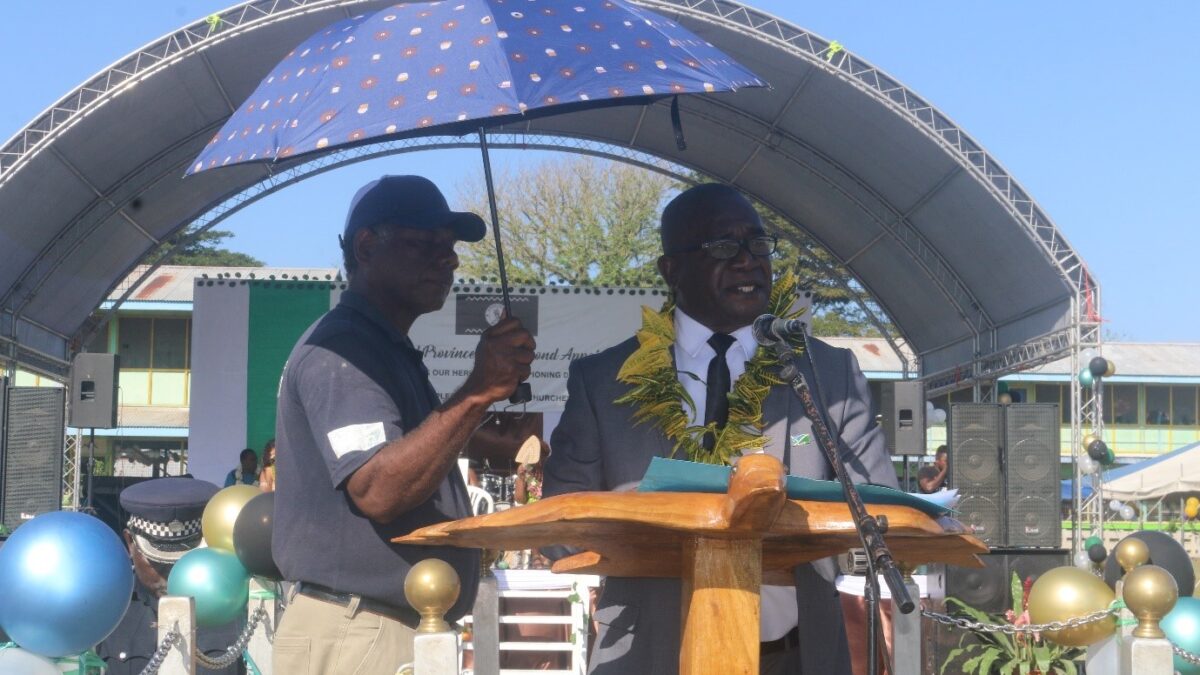 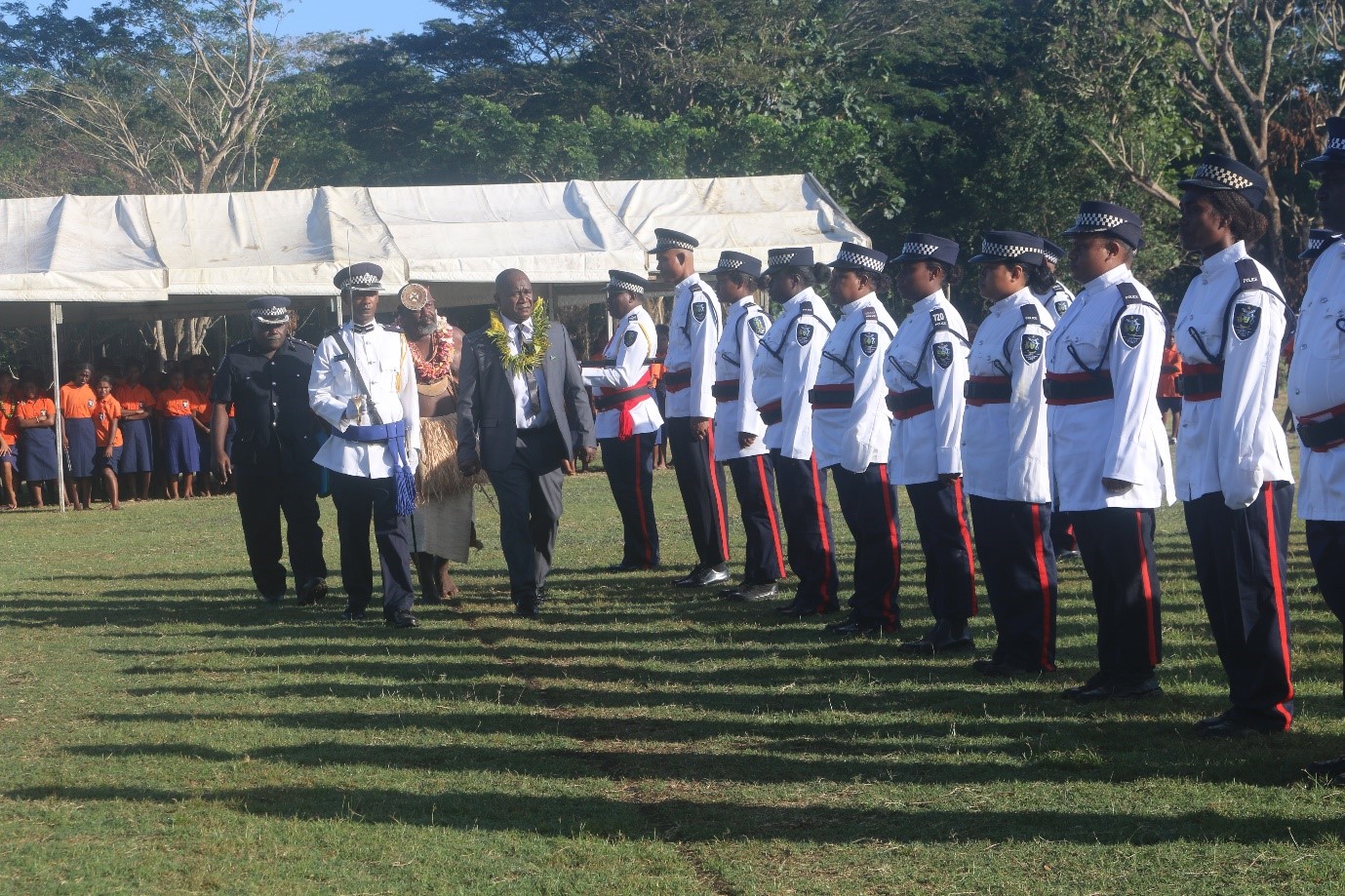 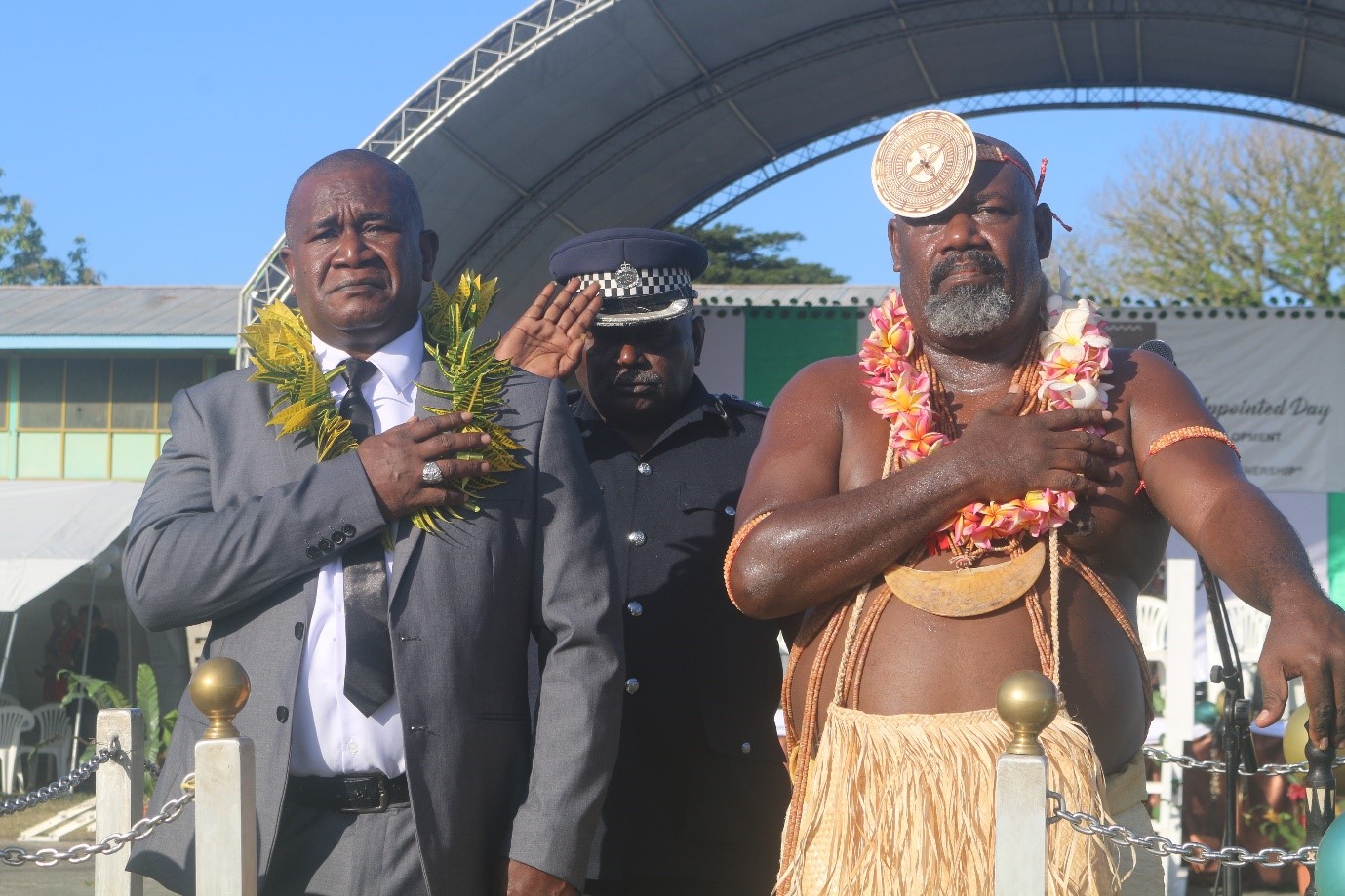 Speaking during the 38th Second Appointed Day Anniversary Celebration of Guadalcanal Province on 1st August 2022 at St Joseph’s Tenaru Catholic School, Guest of Honour, Minister for Ministry of Provincial Government and Institutional Strengthening, Hon. Rollen Seleso stated that one of the policies of the Democratic Coalition Government for Advancement (DCGA) Government is to support Institutional Strengthening of Provincial Governments Systems such as providing the required resources, manpower, finances and the framework that would suit the governance and service delivery aspects of the Provinces.

Recently on 10th June 2022 the Joint Oversight Committee of the Provincial Governance Strengthening Programme (PGSP) approved the mobilisation of a World Bank funded Integrated Economic Development and Community Resilience (IEDCR) Programme, a five-year programme for the strengthening of Ward Development Committees, and the implementing of Provincial Capacity Development Fund (PCDF) projects in the Provinces that are disaster and climate change resilient.

“Because of the PGSP with the transparent and accountable nature of its PCDF, it has attracted the attention of some of our Donor Partners such as the World Bank whose Board has approved a USD24M towards the implementation of the PCDF projects”, stated Hon. Seleso much to the standing ovation from the audience especially Tenaru students and staff who use the occasion to participate in full force to show their appreciation for their new boys’ dorm funded under PCDF. 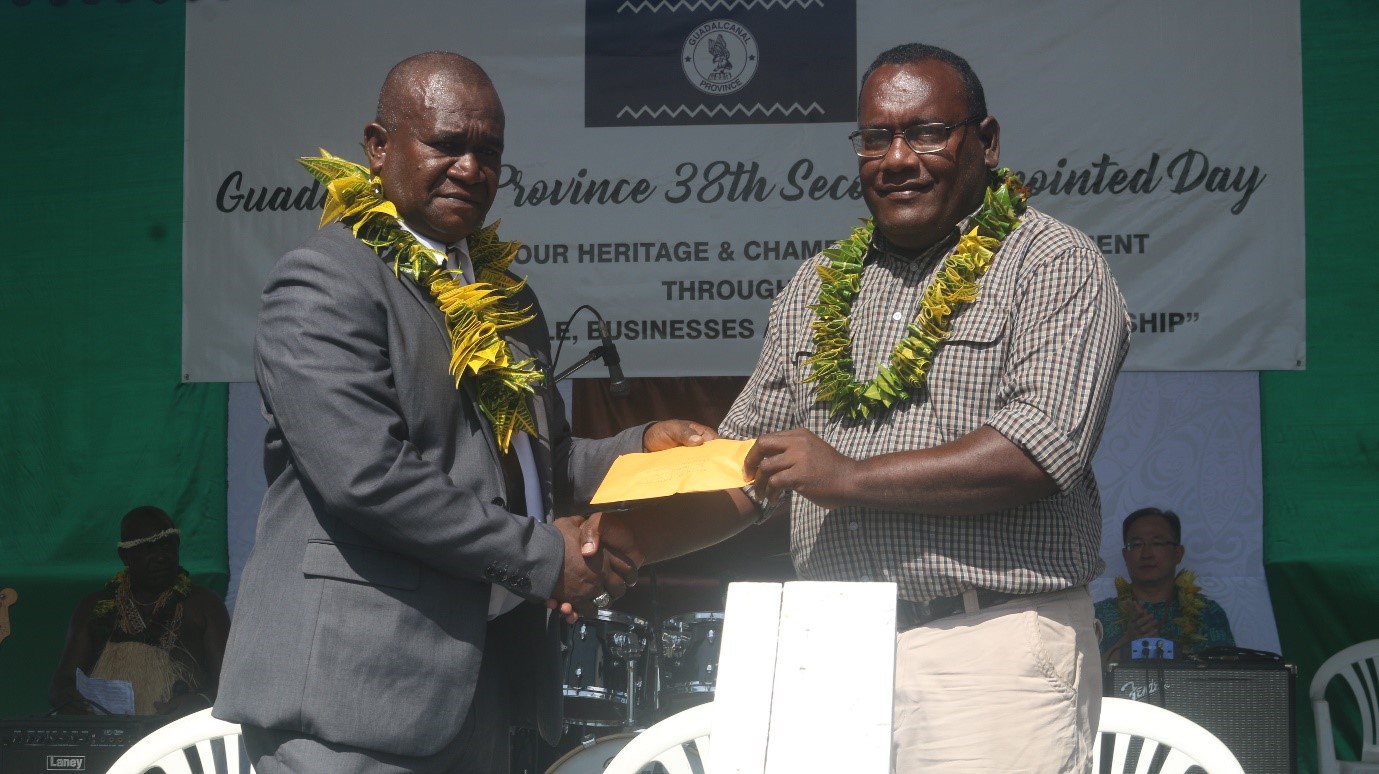 Hon. Minister for MPGIS MP (left) presenting a gift on behalf of the Ministry to the Principal of St Joseph Tenaru Mr. Abraham Hihiru (right)

Minister Seleso stated that the PCDF is boosted with EU SBD78m through UNDP for water and sanitation, and is also expected to benefit from the proposed EU SBD80m through UNCDF for climate and environment and disaster reliance related projects. He stated that the PCDF of SBD40M for the Provinces for this year would be released as soon as final reports of the Provincial PCDF Assessment team for 2020/21 FY are submitted.

The MPGIS Minister congratulated GP for the completion of a SBD1.7m double storey PCDF funded Boys Dormitory at Tenaru Catholic School whose official handing over forms part of the 38th Anniversary Celebrations hosted by Malango Ward at Tenaru School compound. He cited the recently completed PCDF projects which were already handed over to the communities namely; Mbarainagho Rural Health Clinic, Veramogho Shed at Navutu, and Makaruka Mini Market as reflecting the true commitment of the GPG in recognising the needs of the communities, a feat worth commending.

Minister also announced that in addition to the support through the PCDF, the GP is going to benefit from an allocation put aside by the SIG for the Alligator Creek Market. “Based on the National Government’s position to get this project running, a committee has been set up to monitor the progress, discuss land issues and capacity, and ensure assurance of funding continuity”, the Minister stated.

He assured the Premier for Guadalcanal Province that the Ministry will continue to support the capacity building of the Provincial Administration Staff and Assembly as a commitment to equipping the Province to smoothly deliver services. In liaison with the Ministry of Public Service, he added that the MPGIS ensures that there are Core Officers in the Province, and already plans are in place to have the Legal Officer in the Province paid under the consolidated funds through the MPGIS.

On the GP ordinances, the MPGIS Minister assured the Premier that the Ministry continues to work closely with the AGC and the Provincial legal team to ensure that the ordinances that went through the GP Assembly are satisfactorily vetted before being assented to. He clarified that the MPGIS is obliged to ensure that PG Ordinances do not clash with existing laws and regulations and that there is clarity in terms of certain National and Provincial responsibilities. He however, confirmed that the only ordinance that is now being processed for gazetting is the GP Business Hawkers License ordinance 2020 which is very important for revenue collection of the Province.

On the PGA review, the Minister assured the Premier that the review is ongoing in conjunction with the federal system. He said there is support to see if necessary mechanisms are in place for the system to be rolled out in 2026 or 2027.

Regarding township development, Hon. Seleso stated that the MPGIS plays a crucial part in the directorship and management of the Mamara Tasivarongo township project and will work closely with the Ministry of Commerce and the Ministry of Lands in the development of the townships such as Marau as a tourism hub, Henderson or anywhere within the vicinity of Tandai Ward, while at the same time is mindful of the on-going issues such as city boundaries and pressures of demand for services within Honiara and other parts of Guadalcanal Province.

He stated that internal migration and population pressure issues that are being raised over the years by not only GP, are ongoing national issues confronting the National Government. “The calls for Provincial more townships and infrastructures to attract population shift thus alleviate population pressures on GP and Honiara are genuine, however, unless there are legislative frameworks that can facilitate services, infrastructures, land dealings, and respect for customs and values, this internal migration would remain a national problem”, he stated.

On electoral reform, the Minister stated that the Government is looking at synchronizing National and Provincial Elections for cost effectiveness, manageability, accountability, fair representation and recognition of elector’s rights. A task force is carrying out consultation throughout the Provinces and acknowledges the GP’s contribution to the ongoing reviews of the Electoral Act 2018, Honiara City Act 2009, and Provincial Act 1997.

On the Truth and Reconciliation Report and Townsville Peace Agreement that identifies issues that are crucial to reconciliation, compensation, finances, peace, security, stability and policy change, he said the report will be tabled in parliament so that the new beginning of a long process in forgiveness, healing, and nation building could start.

The Minister stated that the principle of friends to all and enemy to none is a cornerstone policy of the SIG in terms of foreign relations. The Government works closely with the Provinces in their relationship with outside governments or sub-national through their NGOs or overseas assistance programs. MPGIS through the Ministry of Foreign Affairs and OPM would like to explore and utilize and provision of guidance and assistance in this regard.

On the theme of the occasion: “Conserving our Heritage, and Championing Development through Government, People, Businesses and Churches’ Partnerships”, the Minister stated that the theme entails engagement, promotion, and partnership, the traits that the Ministry and the Provinces have forged over the years with the stakeholders, business houses, churches, communities and other non-state actors through the PGSP. “We may have competing ambitions, differences and shared challenges, but what is more important is to work together in partnerships to ensure the desires and ambitions of our Guadalcanal people are met”, stated.

The Minister thanks the Premier for his leadership in the face of adversaries and the pandemic that have affected the effective and efficient delivery of the much needed services by the people. He stated that he revers the spirit of cooperation, reliance, and resilience the GP Government and its people have endured over the pandemic years and gave the assurance of the National Government’s continued commitment to working closely with the people in terms of delivering the much needed services.

Hon. Seleso congratulates GP for reaching its 38th Second Appointed Day Anniversary and urged the leaders of Guadalcanal Province from all backgrounds to work together for the common good of the Province.

The Minister was accompanied by the PS and staff from the MPGIS, and other dignitaries from US and the PRC embassies.