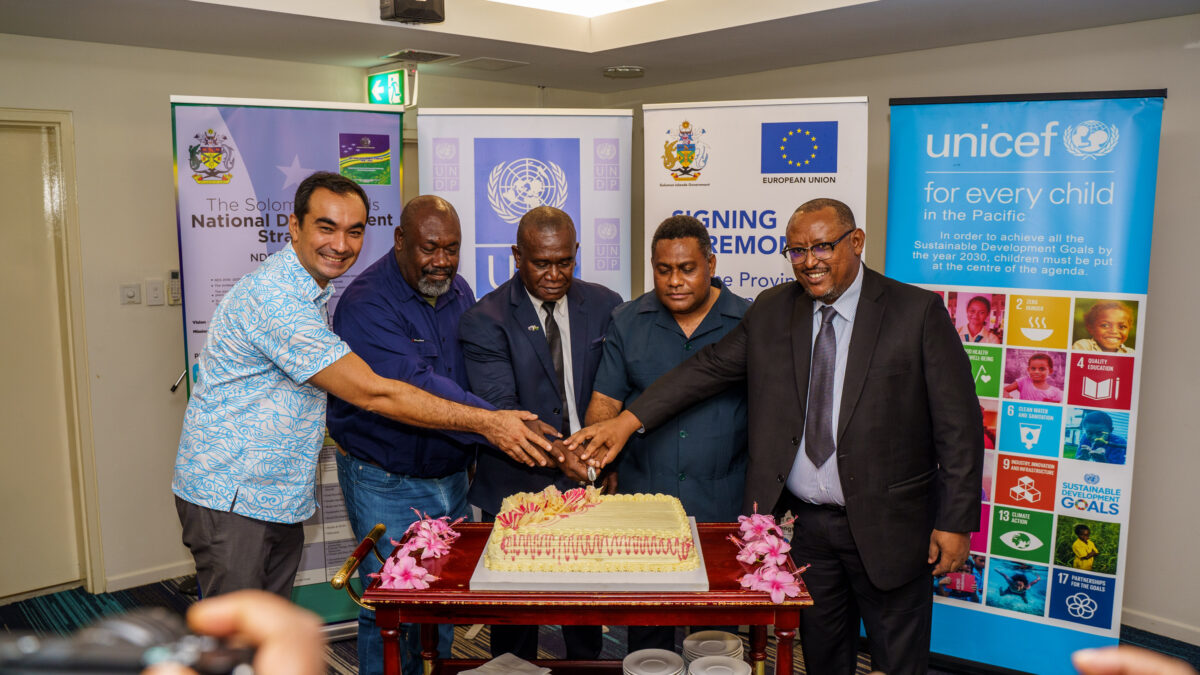 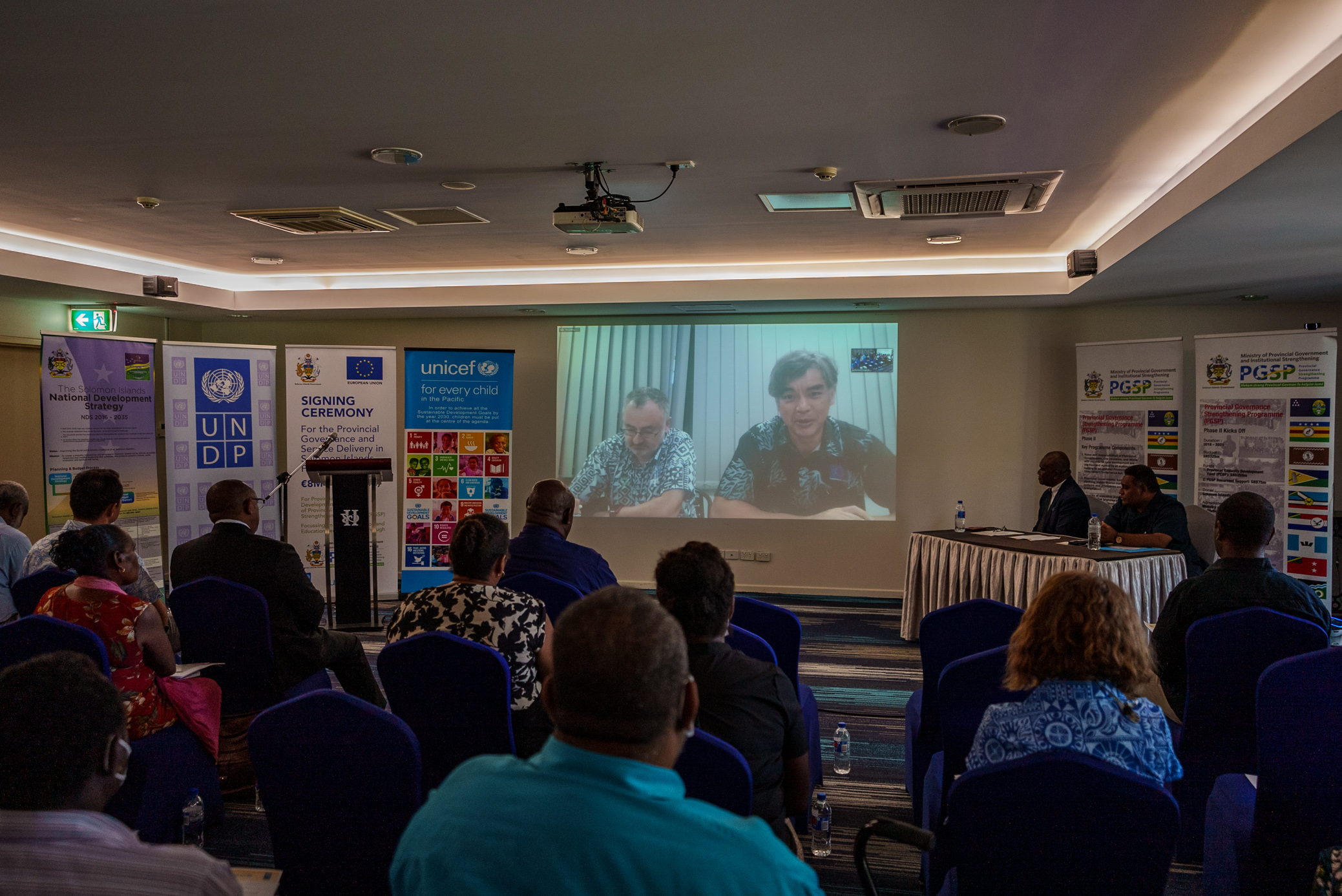 UNDP Resident Representative, Levan Bouadze and EU Ambassador and Head for Delegation of the European Union for the Pacific, H.E Sujiro Seam joined the launching through virtual from Nadi, Fiji 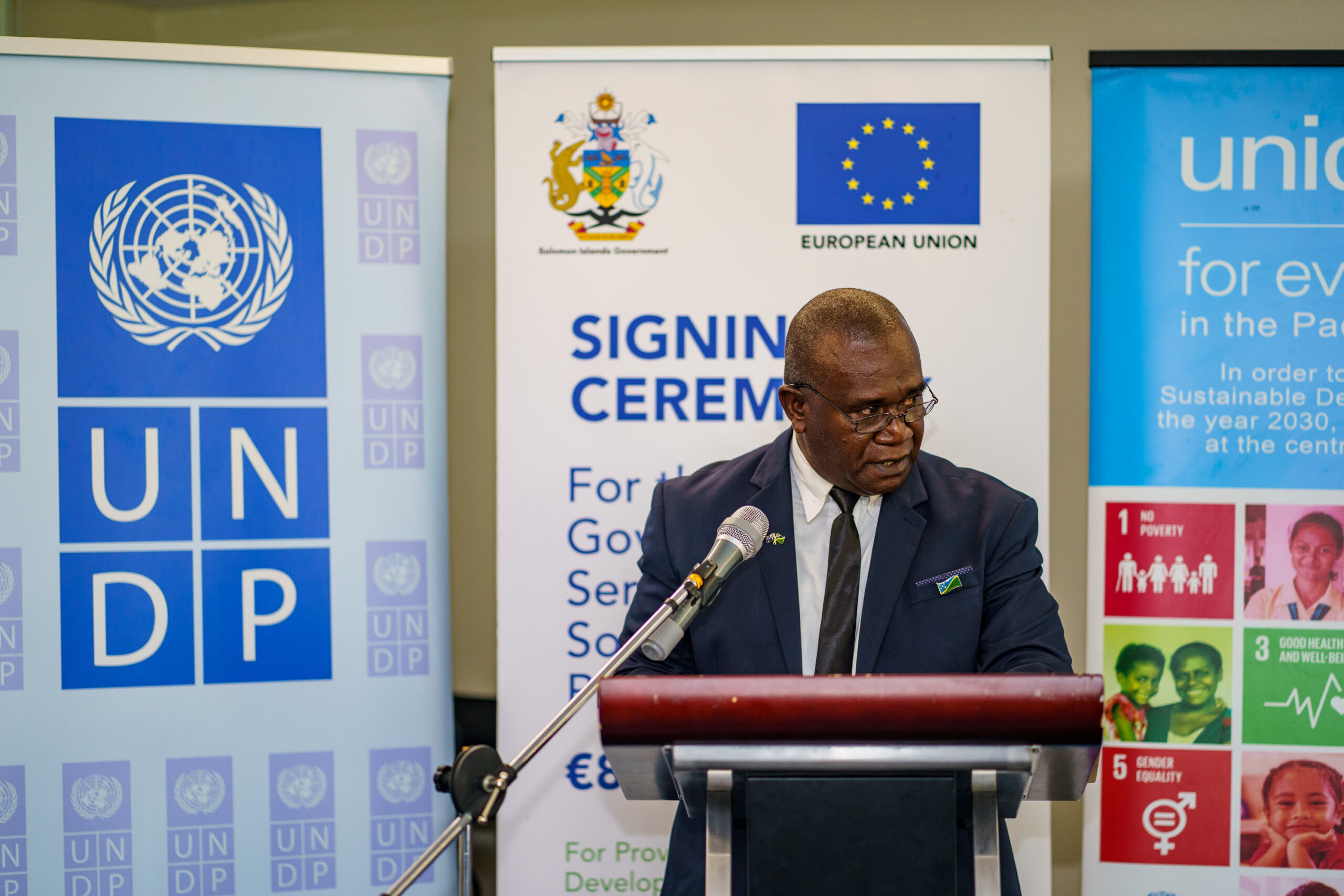 MPGIS Minister Rollen Seleso delivering his speech during the launching

The National Government through the Ministry of Provincial Government is committed to coordinate with all implementing partners for the smooth delivery of the new EU-funded provincial governance and service delivery project.

The new EU-funded provincial governance and service delivery project, funded under EU cooperation through the European Development Fund (EDF), was launched at the Heritage Park Hotel on Wednesday 14th September 2022.

The project will be implemented in Solomon Islands between 2022 and 2025 with a total budget of 8 million EUR ($78M SBD).

Aimed to strengthen the governance systems for service delivery within all nine provinces, UNDP and UNICEF will work closely with the Government to improve the coordination between the Provincial Governments (PGs) and the provincial sector offices for education and health.

Speaking during the launch, Minister for Provincial Government and Institutional Strengthening, MPGIS, Hon Rollen Seleso said the Ministry is fully committed to the delivery of the agreed components of the new project.

“The Solomon Islands Government is committed to the PCDF mechanism because of the tangible results we are seeing on the ground not only in delivering rural infrastructure but more importantly the strengthening of the public expenditure management capabilities of the provincial governments, which is mostly a pre-condition for assignment of further expenditure responsibilities to any sub-national government,” said Minister Seleso.

Minister Seleso said the Ministry of Health and Medical Services and the Ministry of Education have been long-term partners in infrastructure delivery, which is proven by the number of projects that provincial governments have so far delivered in those sectors.

“The Provincial Governance Service Delivery Project which is designed to empower the nine provincial governments to deliver water and sanitation projects and support the service delivery of the two essential ministries at sub-national level shall be the beginning of many collaborative efforts between the Ministry of Provincial Government and the European Union through our United Nations Partners,” he said.

Minister Seleso, on behalf of the government, thanked the people of the European Union for funding the service delivery project and UNDP and UNICEF for taking up the responsibility as implementing partners.

“The PCDF grant mechanism is a longstanding modality of delivery in the provinces which has shown positive results and contributed a lot to improving capacity of provincial governments to deliver services,” said Minister Ramofafia.

“We must also monitor for development results, such that we are able to ascertain progress in service delivery in the targeted sectors of health and education,” he said.