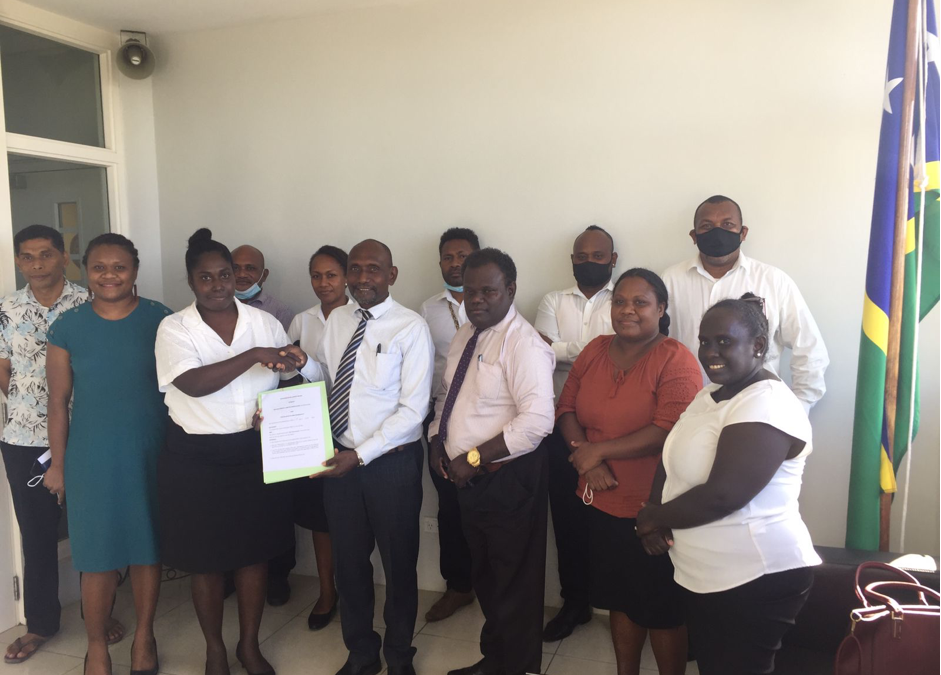 Photo Caption: President GLA, Ms. Kathleen Kohata and PS Public Service Mr. Nego Sisiolo shook hands after the signing ceremony in the presence of senior officials of the three key Ministries and members of the GLA.

The signing of a Memorandum of Understanding (MOU) by the Ministry of Justice and Legal Affairs (MJLA), Ministry of Finance and Treasury (MoFT) and the Ministry of Public Service (MPS) with the Government Lawyers Association (GLA) is a milestone achievement for both GLA members, MJLA and the Solomon Islands Government.

The signing of the MOU on Tuesday the 7th of June 2022 is an assurance that Government has recognize the need to retain legal professionals with the public service.

GLA for the sole purpose of the MOU, comprises of lawyers who are appointed by the Judicial and Legal services Commission to established positions in the various agencies within the Ministry of Justice and Legal Affairs (MJLA).

President of GLA, Ms. Kathleen Kohata in a statement thanked the government for recognizing the need to improve the terms and conditions of service for lawyers in the justice sector.

She said, government lawyers within the justice sector play a unique role as both public servants as well as officers of the court. Their role is to ensure government legal service delivery, as well as maintenance and respect for the rule of law.

“GLA acknowledges it is a DCGA policy strategy target, and as such a clear intention by government to address this issue. Our task is to align our efforts to government policy to realize the needs of lawyers in the sector,” she said.

“We acknowledge the input and effort of all officials, persons, and parties involved that ensued parties reach where we are today. Challenges have been encountered along the way, irrespective the MOU 2022 is the culmination of continuous effort and dialogue between GLA and SIG.”

Dr. Mae pointed out that maintaining a stable and effective governance structure is one of the key National Development Strategy (NDS) objectives of the National Government.

He said the signing of the MOU between SIG and the GLA will ensure legal officers within the Ministry of Justice and Legal Affairs are happy with their terms and conditions, and in turn are committed in the delivery of the services to the people of Solomon Islands.

GLA is registered under the Charitable Trusts Act (Cap 55) whose primary objective is to act as a voice for Government lawyers.

In 2015 GLA formed a special sub- committee to look into developing a comprehensive scheme of service for government lawyers, working in dialogue with MJLA.

SIG was of the view that budget would not cater for the scheme and as such a review of the MOU 2012 was suggested which was agreed to by the parties. A review was undertaken; however, the disputed issued was the level of convenience allowance. A strike eventuated on 5th December 2018 when parties could not agree and on 6th December 2018 the matter was referred to the Trade Dispute Panel by SIG. The signing of the MOU 2022 brings the dispute to an end.

Under the new MOU 2022 GLA and Government agree to further develop a scheme of service for government lawyers.

It covers clothing (the dress code for lawyers is prescribed by law), convenience allowance and housing. The convenience allowances for example have not been reviewed since MOU 2007. Housing ensures there is due consideration for those who have difficulties when stationed in provinces, or those with unique circumstances.

The convenience allowance is calculated on a fixed rate tier system, determined by the number of years a GLA member has been in service and appointed under the Judicial and Legal Services Commission. Therefore, GLA members do not claim overtime allowances as overtime is now covered in this comprehensive scheme of service.

The signing ceremony was held at the Ministry of Public Service Head Quarter Building at Town Ground.