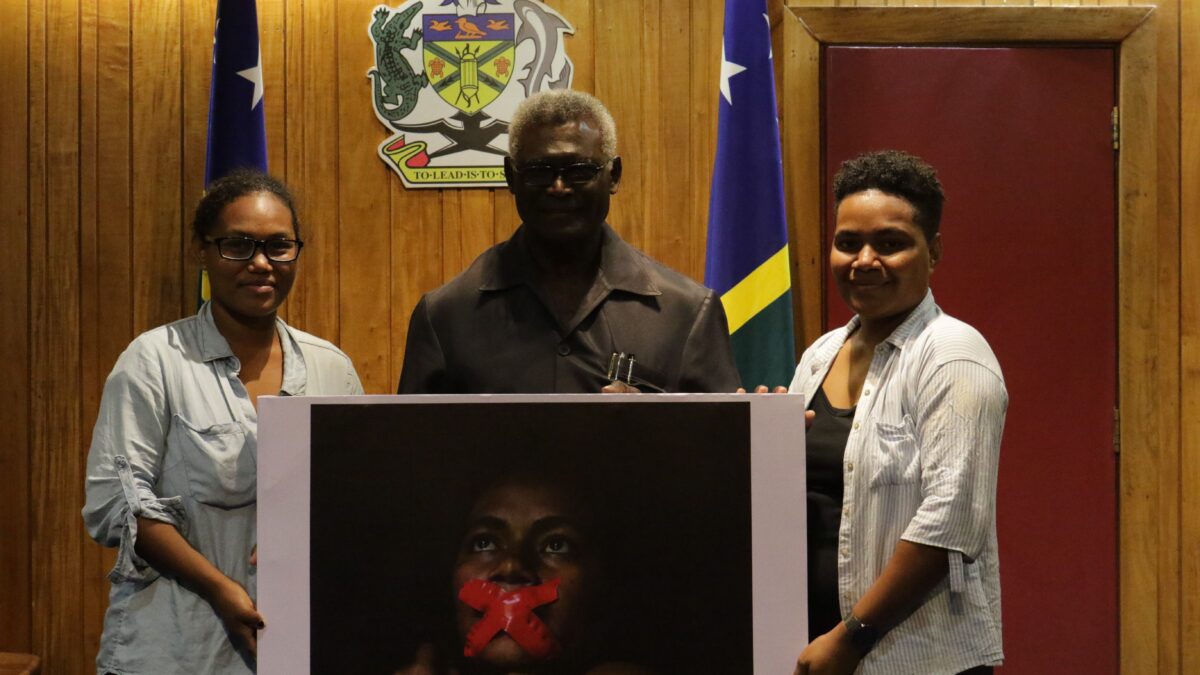 “Gender equality” and “Climate Change Impacts” are the two powerful messages that Prime Minister Manasseh Sogavare has summarized during this week’s photography storytelling exhibition in Honiara.

The Prime Minister stated when he was gifted on Thursday with a portrait of his choice selected out of a total of 15 photos exhibited at the National Art Gallery.

The Prime Minister underlined, Gender Issues and Climate Change are current issues that policies do not really cover.

“The message in the portrait is silent but very powerful,” said Prime Minister Sogavare.

He adds, “These messages wouldn’t be singled out if all is ok. Something is drastically wrong with our society.”

The Universal Declaration of Human Rights key principle is “all human beings are born free and equal in dignity and rights.”

The Prime Minister said, Human Rights laws on gender are powerful and clashes against our Christian beliefs.

“The message in our photograph is the feminine gender must be equally treated as the male gender. Both gender’s voice must equally be heard,”

Agreeing on the message portrayed, Prime Minister Sogavare said “a man who wants to see the value of his wife must understand the pain a women went through during child birth and must never lay hands on his wife”.

On the broad subject of Climate Change, the Prime Minister said, Solomon Islands ability and effort to address Climate Change impacts is a drop in the Ocean.

“As a nation, our influence to the global emitters is nothing.  We must graft together as a region and then work with the international community and relevant partners to be heard by the developed world who are unfortunately the major emitters,” he said.

He added that China and USA are among major global emitters. If one of them refuses to participate in international agendas, the consequences will be bad for the world.

China on the other hand is among the first to sign the Parish Agreement. In all seriousness, it also sets aside trillions of dollars to address the impacts of Climate Change.

He said, “These issues must continue to dominate discussions until we arrive at a better way to address them. Once we address them, Solomon Islands will be a better place for all of us”.

The Prime Minister also financially assisted the 15 artists who took part in the photo exhibition (8 females and 7 males).

Explaining their portrait, Juanita Aitorea and Andy Faye Bonuga said, they have heard and witnessed, women are not as important as men in our society.

“The message in our photograph is the feminine gender must be equally treated as the male gender. Both gender’s voice must equally be heard,” said Juanita.

Juanita and Andy said, they are aware, most of the feminine gender in our society share the same experience but chose to remain silent.

The photography storytelling exhibition is an initiative of Oxfam Solomon Islands.