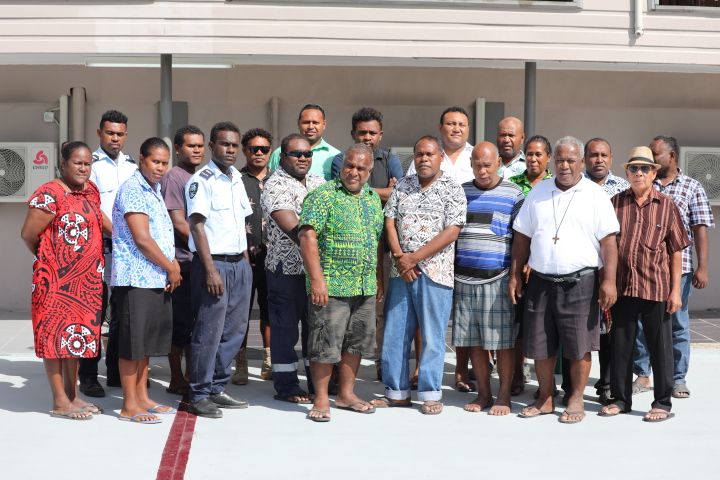 The Ministry of Environment, Climate Change, Disaster Management and Meteorology (MECDM) and the Secretariat for the Pacific Regional Environment Program (SPREP) Readiness 1 Project team are currently engaged in consultation and awareness raising with a number of Provincial Governments in the country to help them understand how the Green Climate Fund (GCF) works and how it can be accessed to assist their provinces in transformational mitigation and adaptation interventions.

SPREP as the delivery partner, is working very closely with the Solomon Islands Government through the MECDM to implement the “Strengthening the National Designation Authority (NDA) capacity and Strategic Engagement of Solomon Islands with the Green Climate Fund” Readiness and Preparatory Support project. The NDA is hosted by MECDM and currently is the Permanent Secretary of MECDM, Dr. Melchior Mataki.

This week the team from the MECDM and SPREP Readiness 1 Project team travelled to Buala in Isabel Province to consult with the Provincial Government and as well as conducted a one day workshop to introduce the idea to different stakeholders working under the Provincial setup. Introducing the project to participants, Deputy Secretary Technical for the MECDM, Mr Chanel Iroi said the GCF is one of the biggest funding mechanisms available under the UN Framework Convention on climate change that can be accessed by Small Island Developing State like Solomon Islands.

Meanwhile speaking on behalf of the participants and Isabel Provincial Government, Deputy Provincial Secretary Mr Rex Manase thanked the MECDM and SPREP Readiness 1 Project for seeing the importance of taking such vital information right down to the provincial level and its stakeholders. He said the GCF funding concept is new to them and the province is grateful to have the opportunity to be able get first-hand information from persons directly involved in administering the process to access the funds.

The workshop was attended by officials from the Isabel Provincial Government, church leaders, Chiefs, Women groups and other stakeholders.