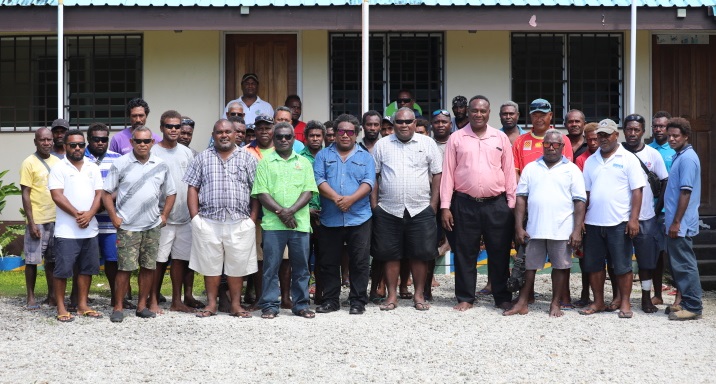 In the last two days, skippers of small boats from Ngella, Savo and the Russell Islands gathered in Tulagi for a workshop that covered Marine Weather Services, offered by Solomon Islands Meteorological Service to the maritime sector including small boat owners.

One such system that is now in use for small craft operators from Tulagi and surrounding islands is the Flag based early warning system that will forewarn boat skippers of current weather conditions before they travel. The system involves the raising of a red flag that indicates bad weather and a blue flag that indicates fine weather. The flag pole has been installed adjacent to the Tulagi hospital and the Police in Tulagi will be responsible for raising the appropriate flag based on advice from SIMS.

At the close of the workshop, Central Province Premier Mr. Stanley Manetiva expressed his profound gratitude to the Ministry of Environment Climate Change Disaster Management and Meteorology for choosing his province as the first province in the country to use this simple early warning system.

He urged all skippers to use the system to help them gain the trust of the traveling public. “If you earn the trust of the people through provision of safe and comfortable traveling, the spinoff will be beneficial to you in terms of the income you raise” Premier Manetiva said.

One participating skipper expressed his satisfaction, saying the dangers posed by the sea and especially during rough weather are real, and the workshop has really enlightened him of the importance of having some knowledge of the behaviour of the sea.

“As a boat skipper, this workshop has really helped me to further my understanding of safe travelling, and I thank the SIMS for taking the information down to us, and for installing the flag-based early warning system. I will help out in passing this very important information to other boat skippers” said Mr Fred Semu.

The workshop is part of the SIMS implementation of its 2021 Annual Work Plan.