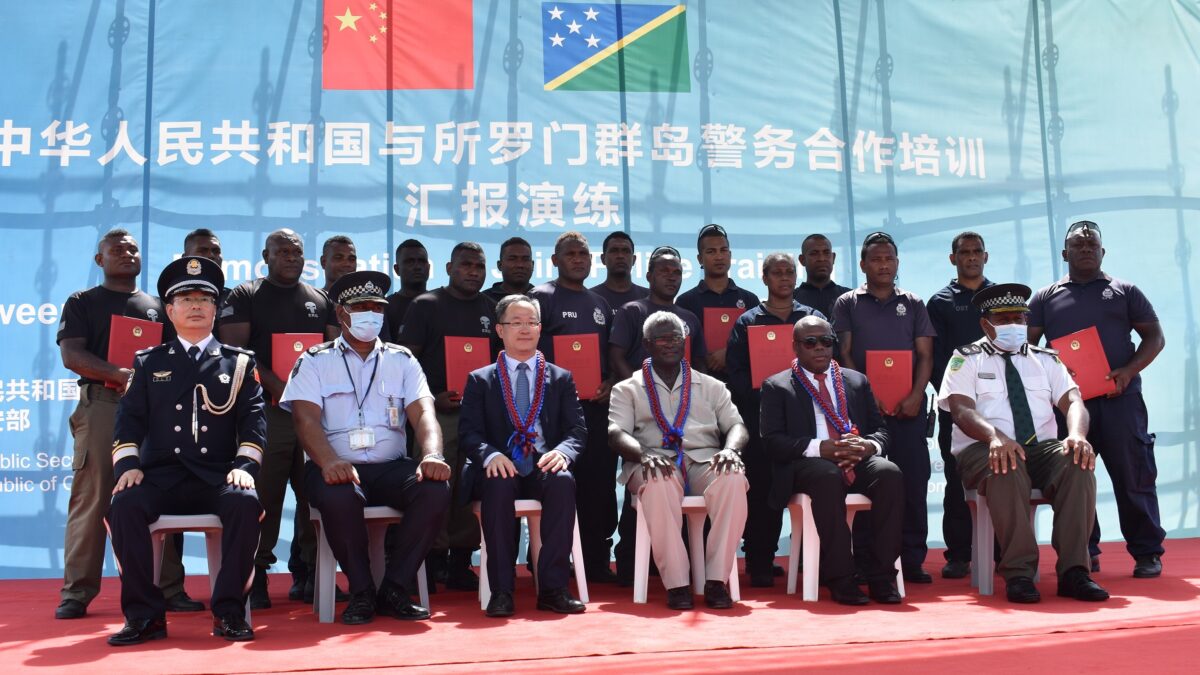 Demonstration of joint Police Training between PRC and SI in Honiara

During the demonstration, officers punched fiercely, defended and counterattacked quickly. Have used police equipment with high skills. Their mock tactical operations conducted good team work with proper understanding of the use of force. The whole demonstration was professional, magnificent, vigorous, which showed the brilliant achievement of Joint Police Training between PRC and SI.

The RSIPF and CSSI officers showed their firm confidence in defending the law and fulfilling the mission. Police training between PRC, RSIPF and CSSI had a great impact on the capacity building of the Solomon Islands Police Force.

Ambassador LiMing stressed the police cooperation between China and SI is open, transparent and inclusive on the basis of equality and respect. It is believed that with the smooth implementation of joint police training and assistance, the capacity of RSIPF will reach a high level.

He stressed that China is ready to work with Solomon Islands to deepen bilateral law-enforcement cooperation and focus on concrete actions, which is going parallel with regional arrangement and is not target at any third party.

Hon. Minister of MPNSCS Mr. Anthony Veke said in his speech that the police training and assistance provided by PRC CPLT has greatly helped the RSIPF in safeguarding National Security and social stability as well as protecting the legitimate rights and interests of citizens of SI.

He was glad to see that the demonstration was successfully completed with high standard and high morale, fully demonstrating the achievements of police cooperation between China and SI.

Mr. Veke acknowledged the PRC CPLT for its professional training, efficient assistance, transparent cooperation with friendship and goodwill. He hoped that the RSIPF would become one of the best police forces in the region with the help from China and other partners.

The Hon. Prime Minister Mr. Manasseh Sogavare said that he was deeply impressed that the capability of the RSIPF and CSSI has been greatly boosted with the training and aid provided by PRC in the past five months.

He thanked the PRC ambassador Mr.Li Ming for the government’s firm support over the years and spoke highly of the commitment of the PRC Commissioner Zhang and his Liaison Team , pointing out that the Team has played an important role in strengthening police capacity building and maintaining social stability.

Mr Sogavare said the recent November Riots has put us back as a country. It is the responsibility of RSIPF to protect our people and  he urge all officers to discharge this responsibility with pride and honour. He has confidence and trust that with the training and equipment provided, RSIPF and CSSI will defend the rule of law against the rule of the jungle.

He stressed while we have MOUs in place, it is prudent that Solomon Islands and the Peoples of Republic of China start discussion on how we can elevate the current joint training arrangement to a more permanent arrangement with clearly defined expected outcomes which aim at ensuring that RSIPF and CSSI have capability in the long term.

There are nine containers of police equipment around Rove training ground; all of them were donated by the PRC with the big symbol of China Aid.

Since the beginning of this year, PRC has provided police equipment, epidemic prevention materials and communications equipment worth 32 million Solomon dollars to SI.

Another batch of police aid worth 28 million Solomon dollars, including police assets will arrive in the near future. These assisting projects will provide strong support for the capability and capacity and building of RSIPF.

Since arriving in Solomon Islands on January 26, 2022, the PRC CPLT has been upholding the guiding principles of ‘Professionalism, High-efficiency, inclusiveness, Transparency’ for the purpose of friendship and goodwill and has strengthened cooperation with MPNSCS and RSIPF.

China Police have visited all the police stations in Honiara and Guadalcanal and learned the challenges of the frontline officers. They rapidly assisted a series of police supplies, and carried out in-depth training in equipment utilization, police skills, public order management and close personnel protection.

In the past five months, they have trained 9 batches totalling 165 officers for the RSIPF and CSSI, which effectively improved the capability and capacity of police in maintaining the social stability of Solomon Islands.

The Chinese government and the Ministry of Public Security attached great importance to police cooperation between China and Solomon Islands. Minister of the Ministry of Public Security of PRC HE.Mr.Wang Xiaohong had a virtual meeting with Hon.Minister of MPNSCS of Solomon Islands Mr. Anthony Veke and signed the Memorandum of Understanding on Police Cooperation between the two governments, reached a series of consensus and established a close police cooperation mechanism.

The bilateral law-enforcement cooperation will become stronger in the future, which will bring peace and stability for people of SI and make it a safe and happy isles. 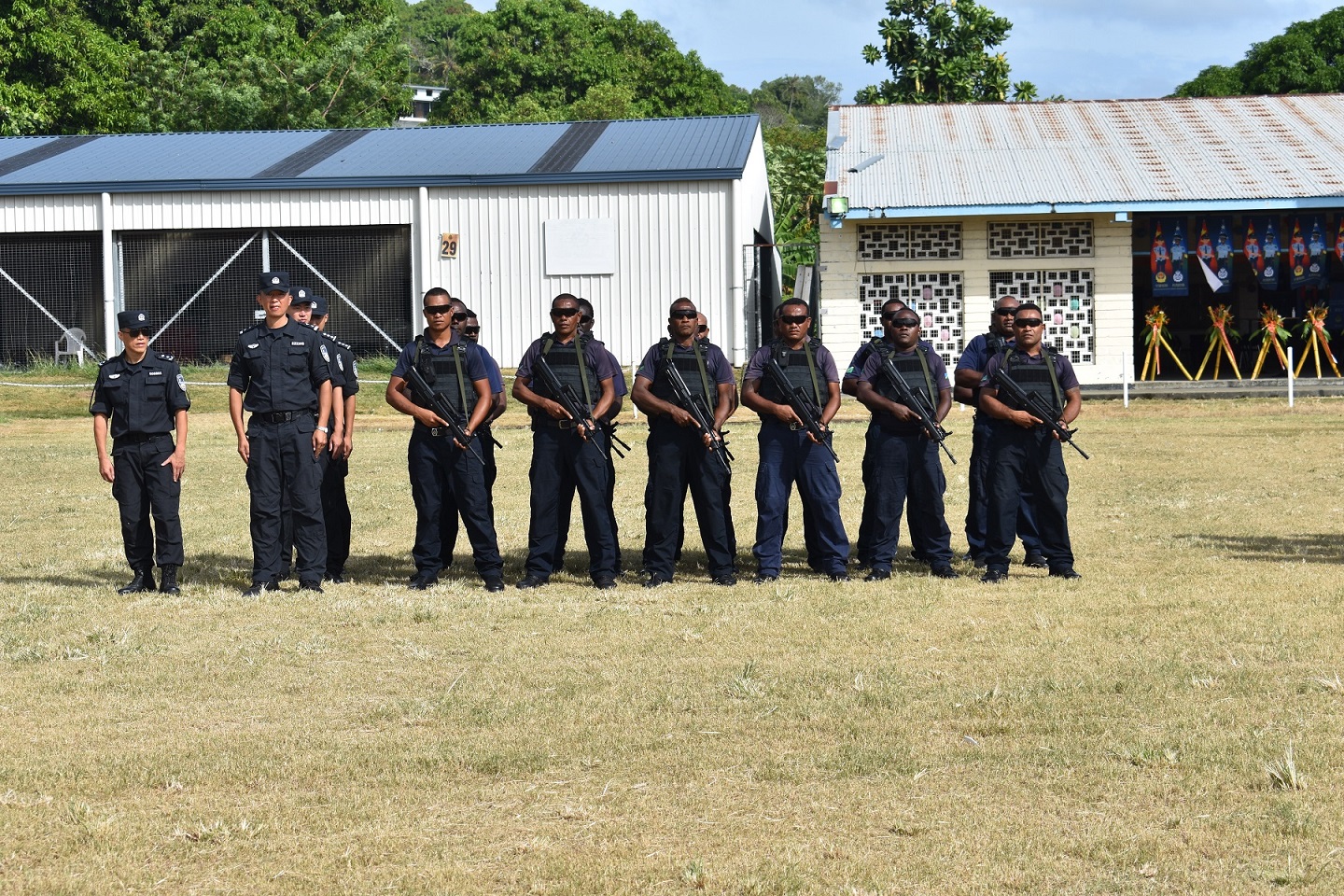 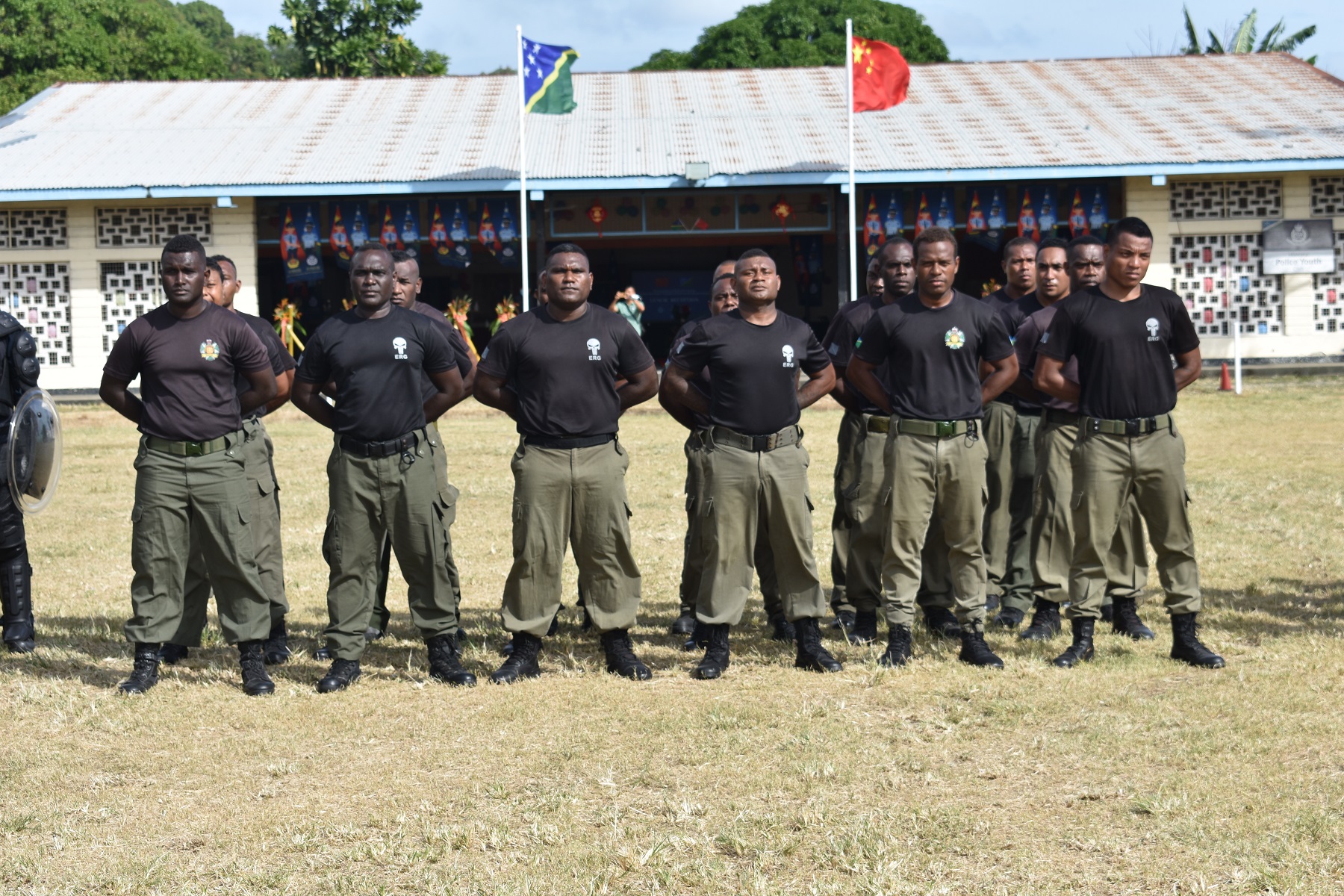 ERG officers before the demonstration ceremony 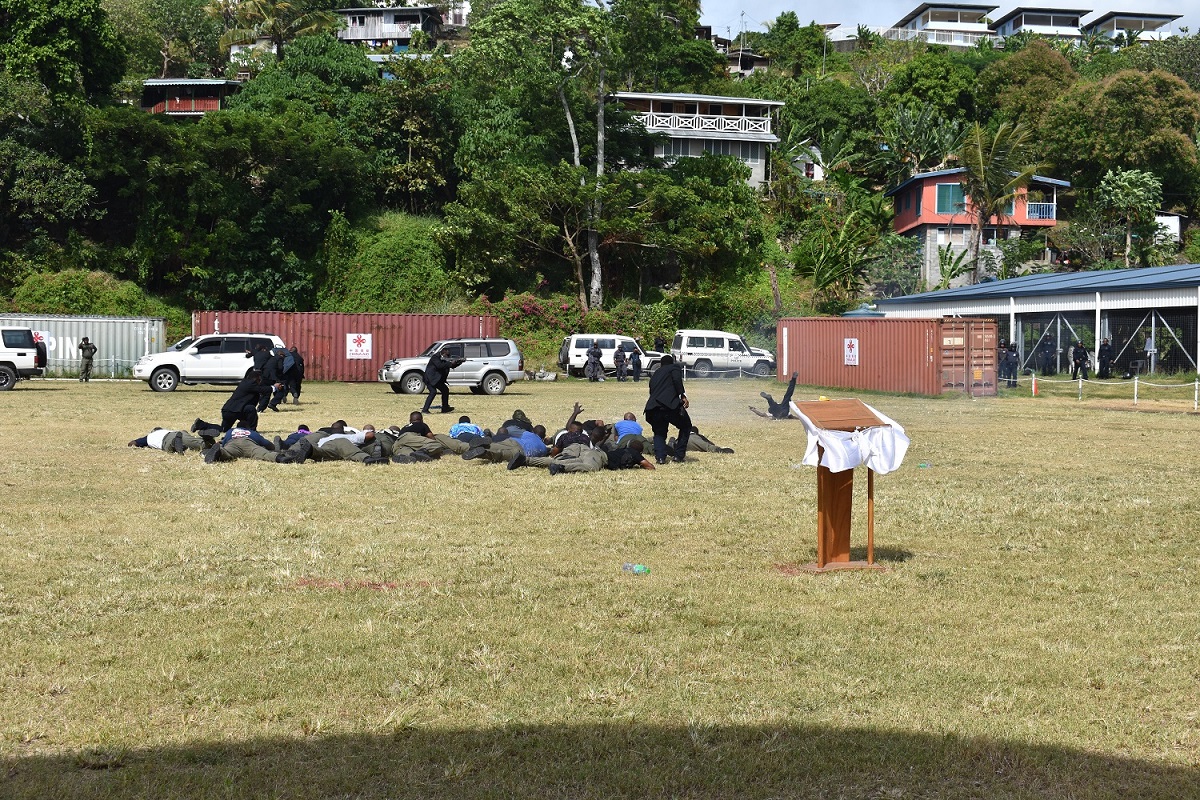 CPP officers showcasing how to escape principle during riot situation 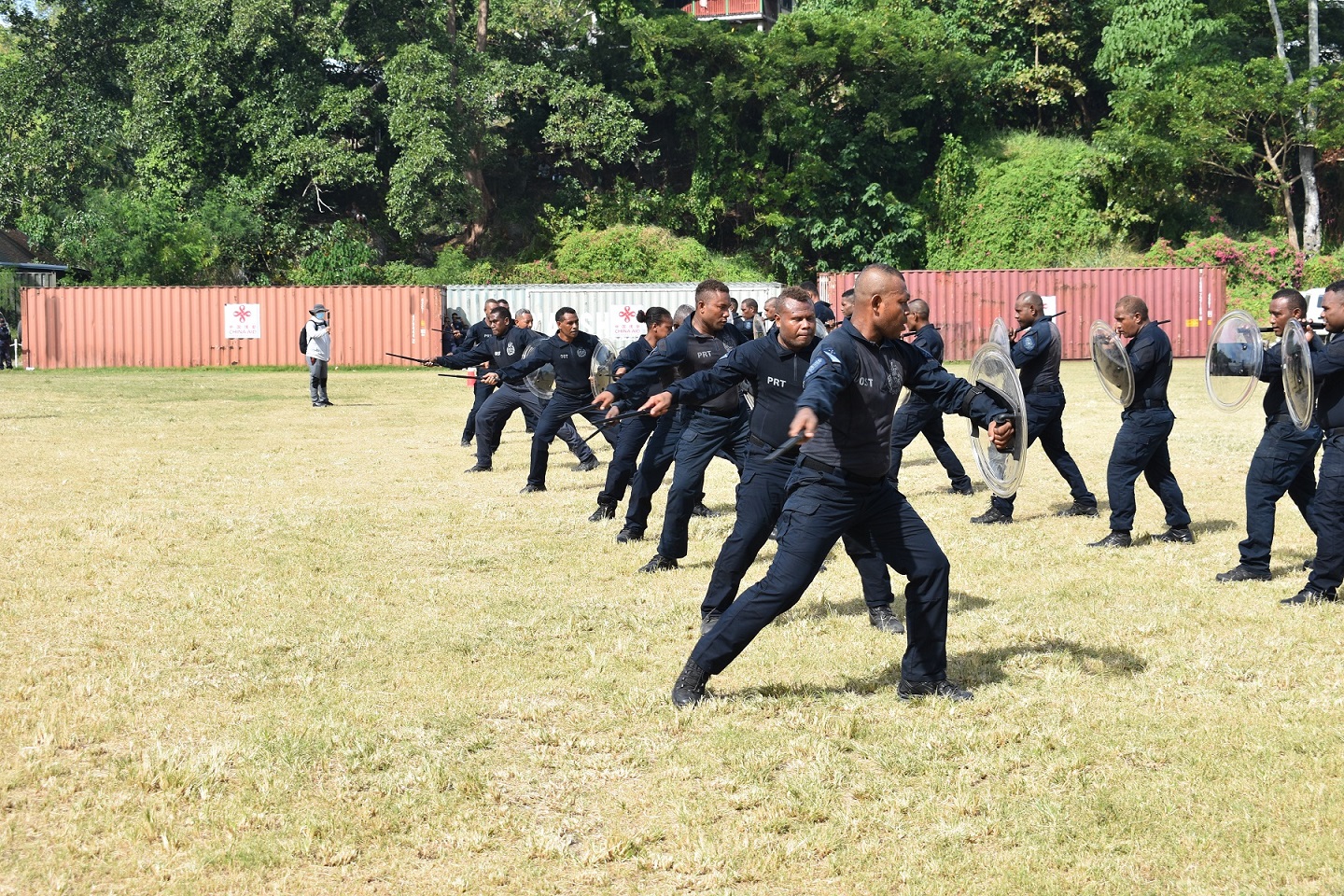 Officers displaying how to use baton and shield during riot 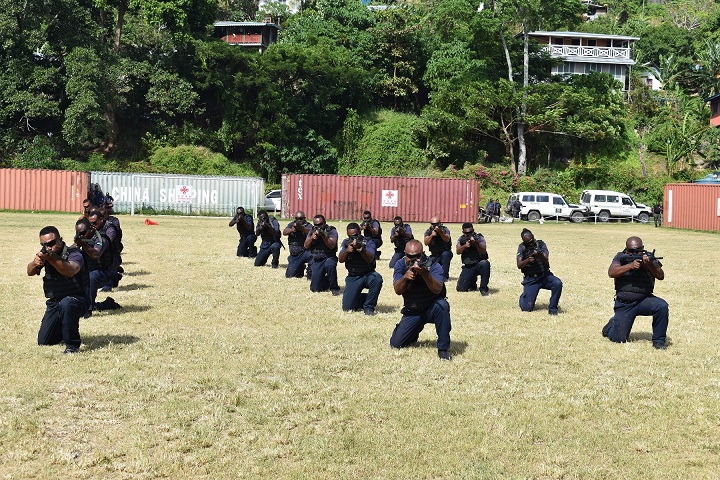 Kneeling formation when using firearm during the ceremony 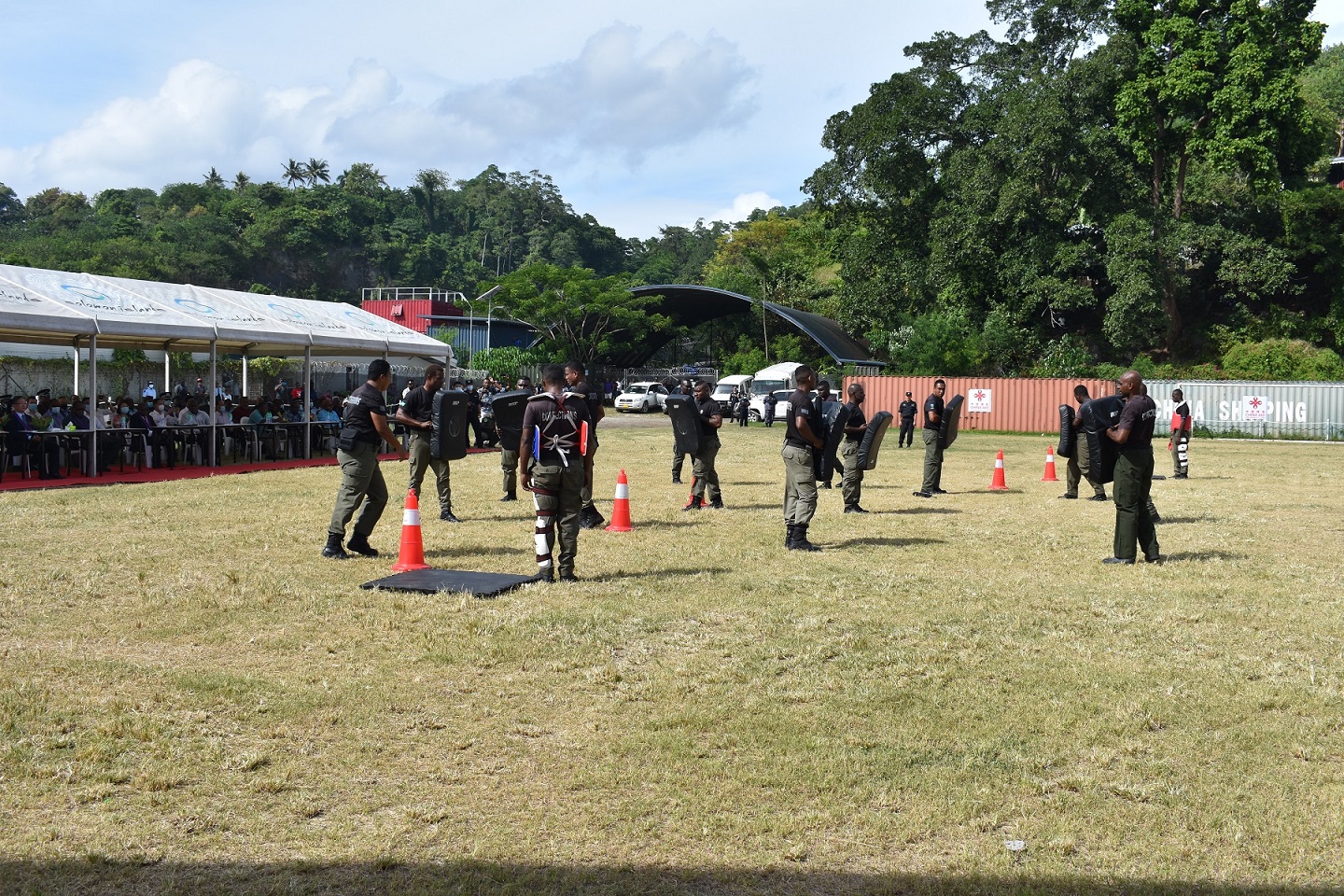 ERG officers displaying how to take control of aggressive people 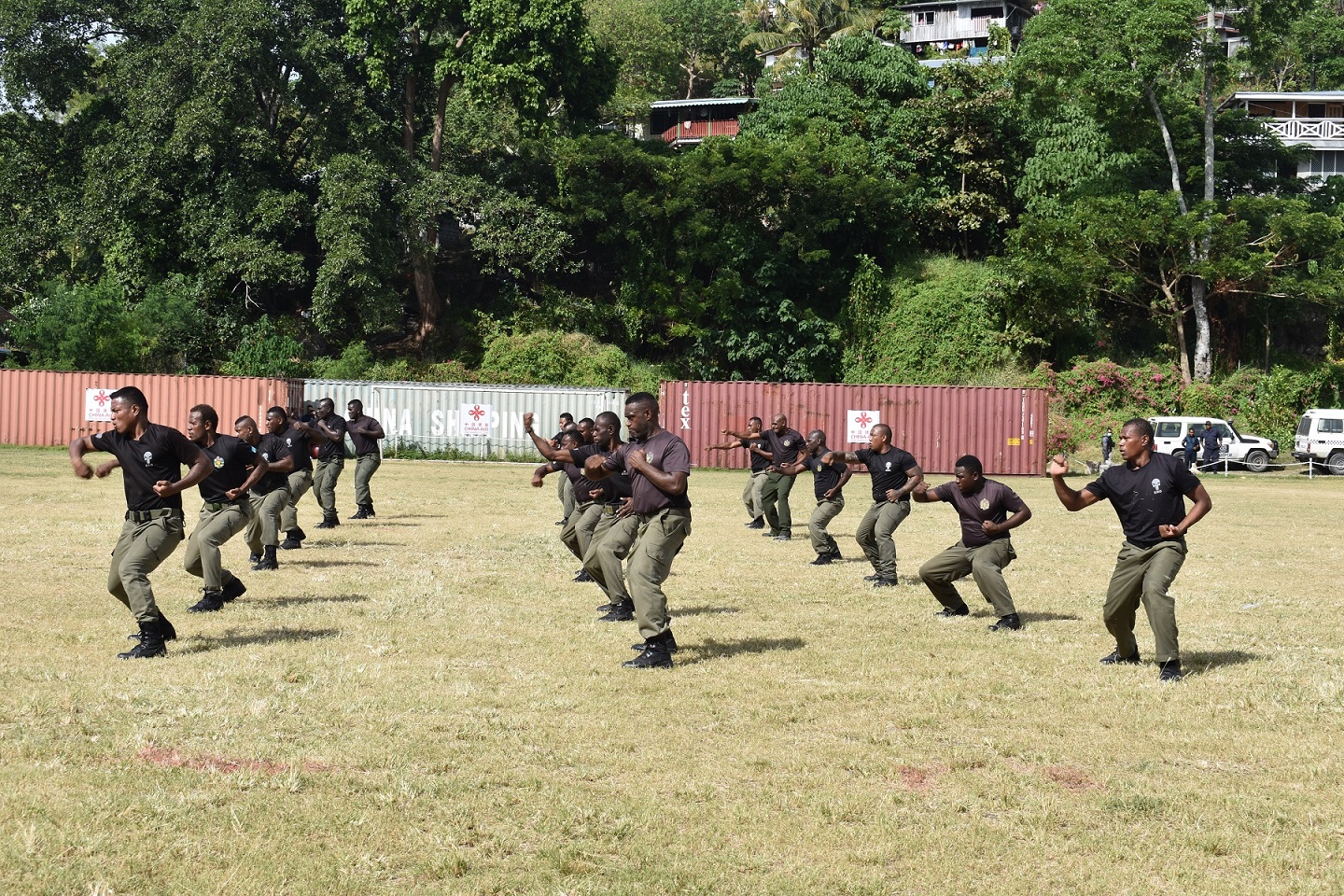 ERG officers performing the art skills from PRC during the ceremony 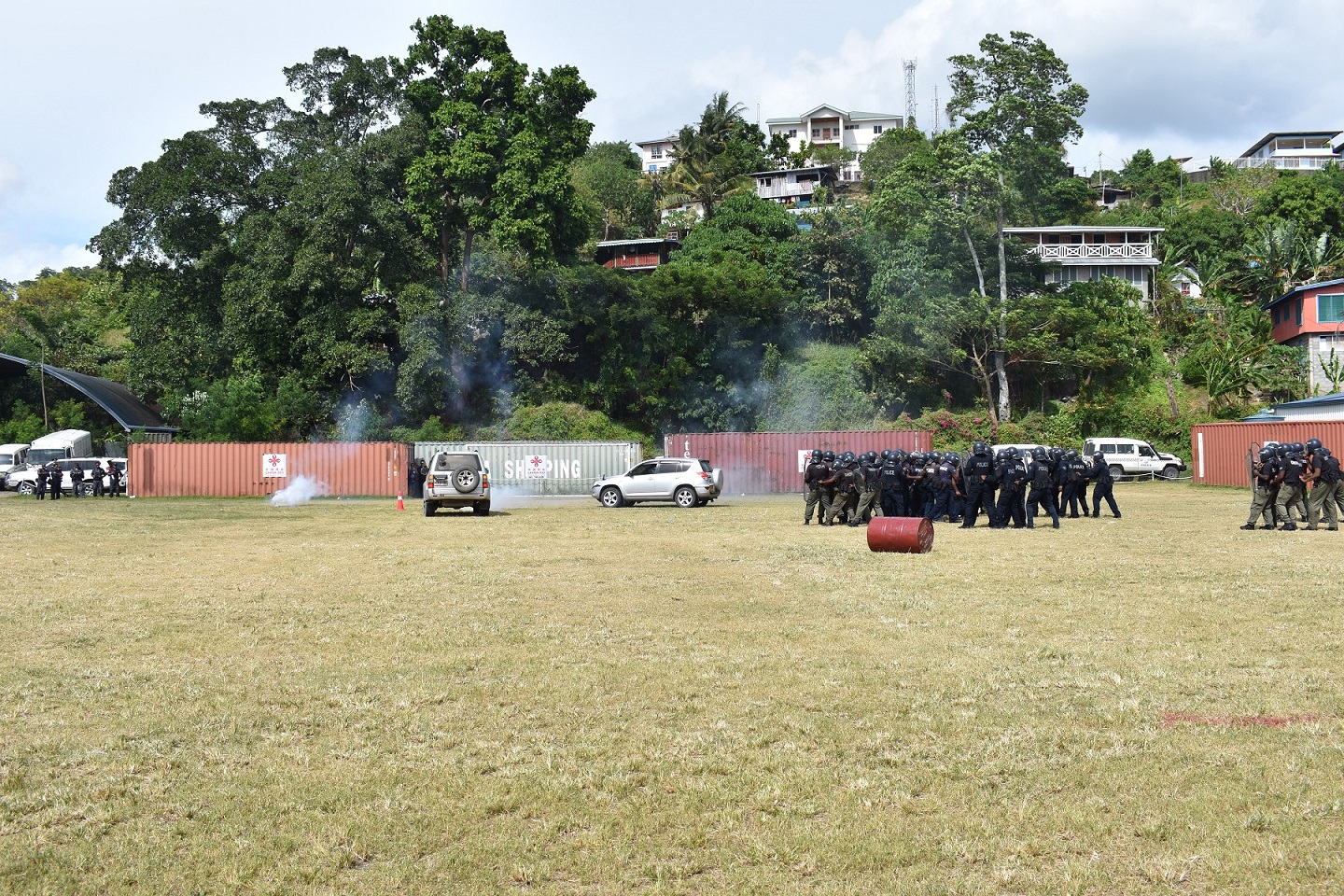 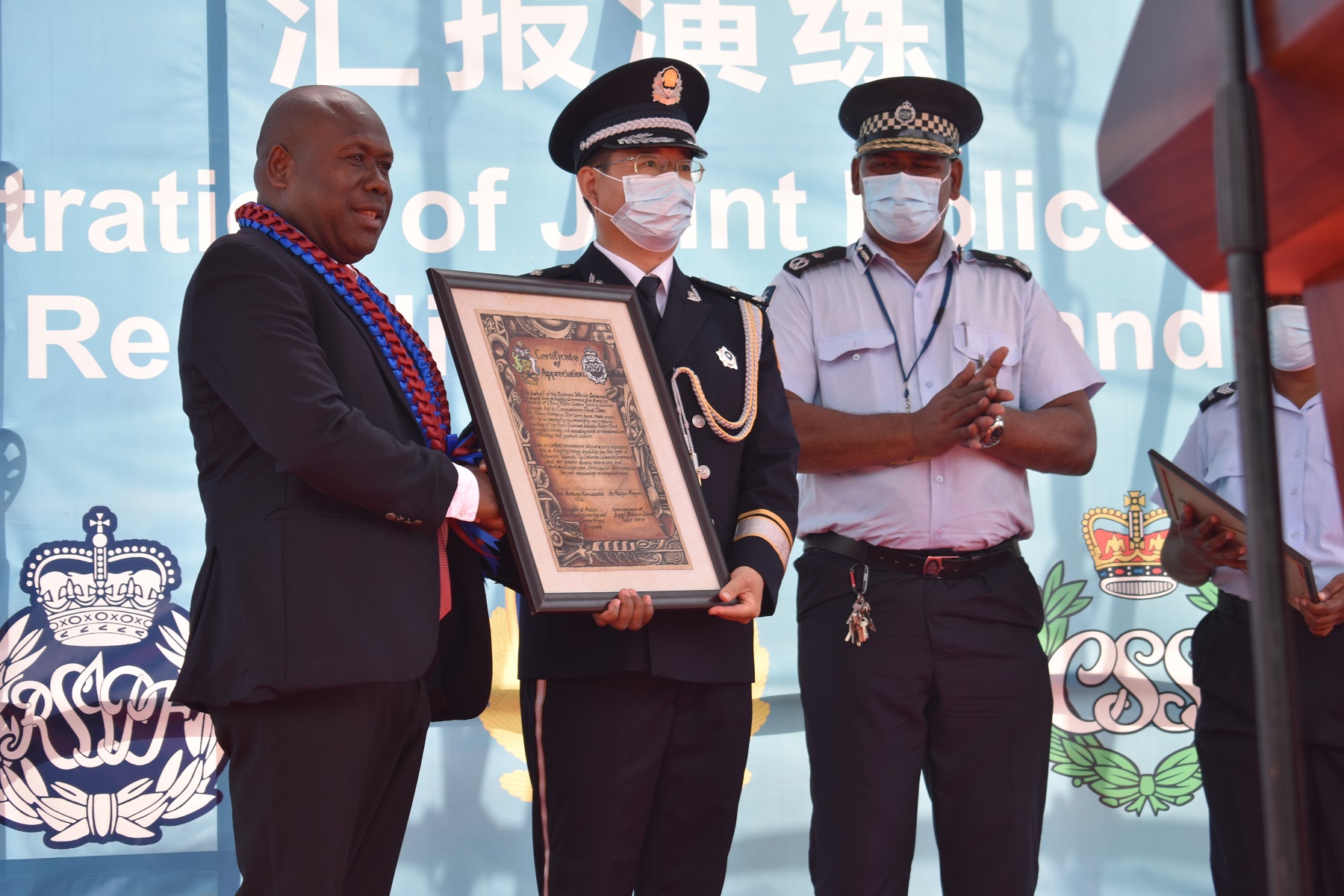 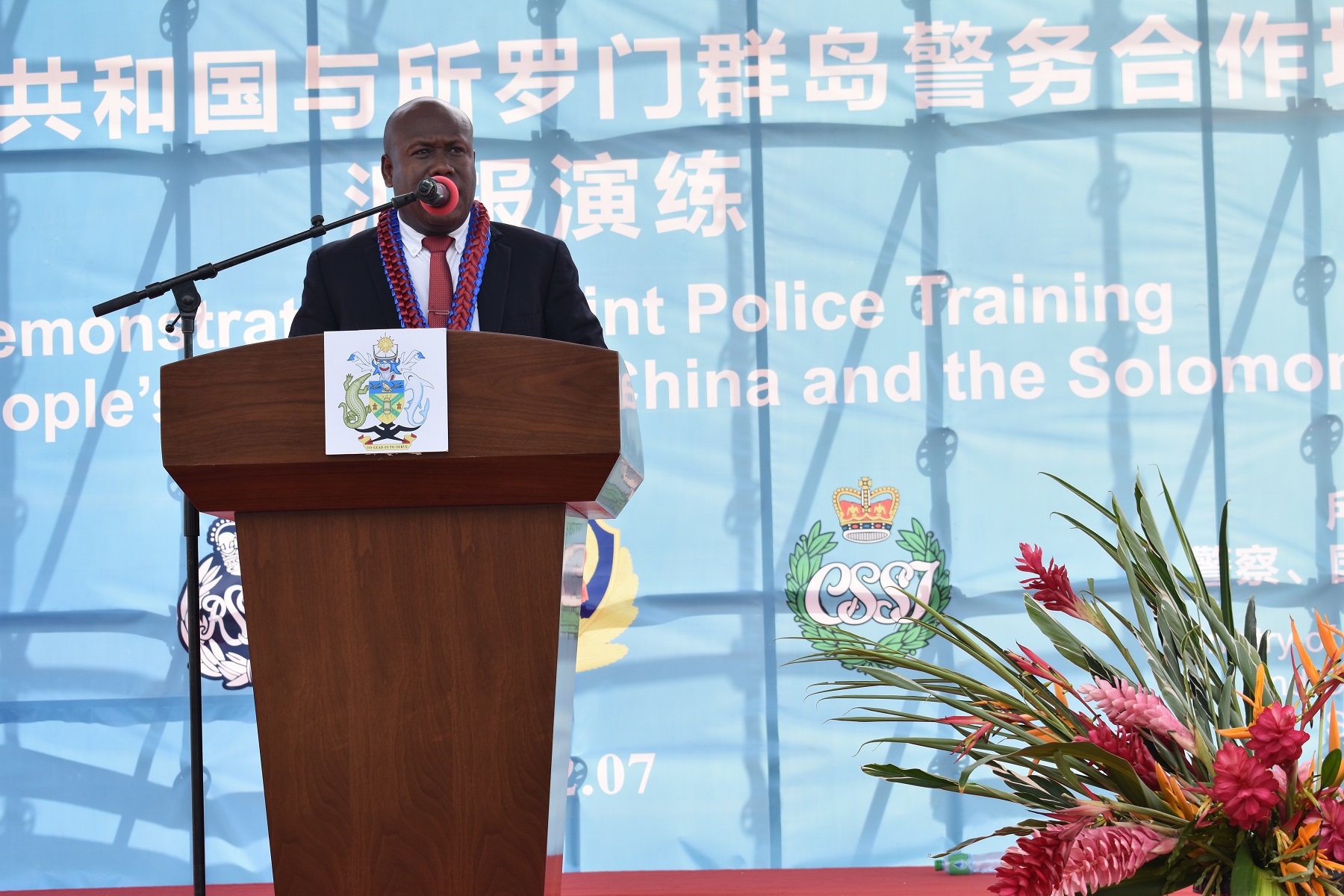 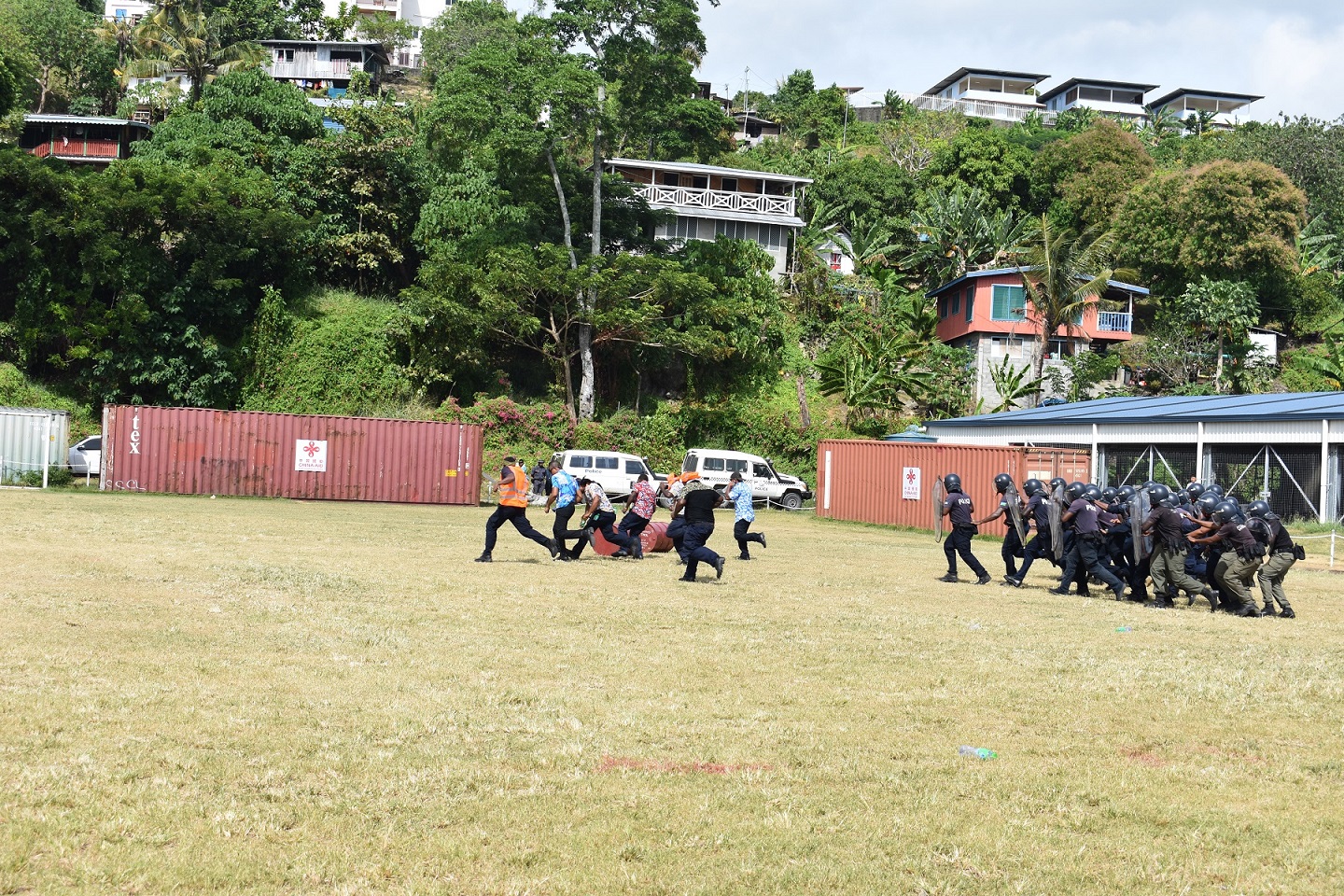 Officers respond to rioters using long shields during the ceremony 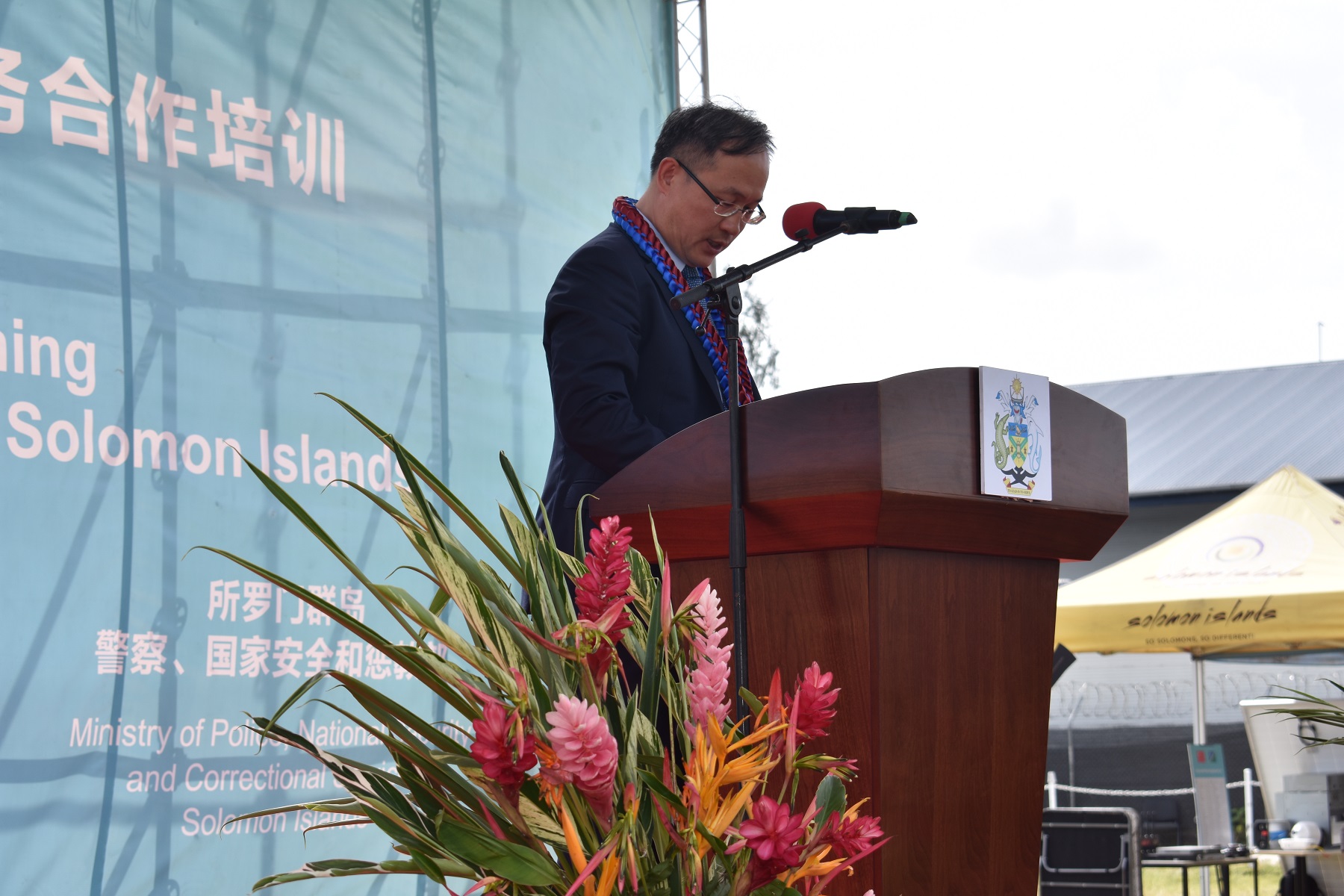 PRC Ambassador speaking during the ceremony today at Rove 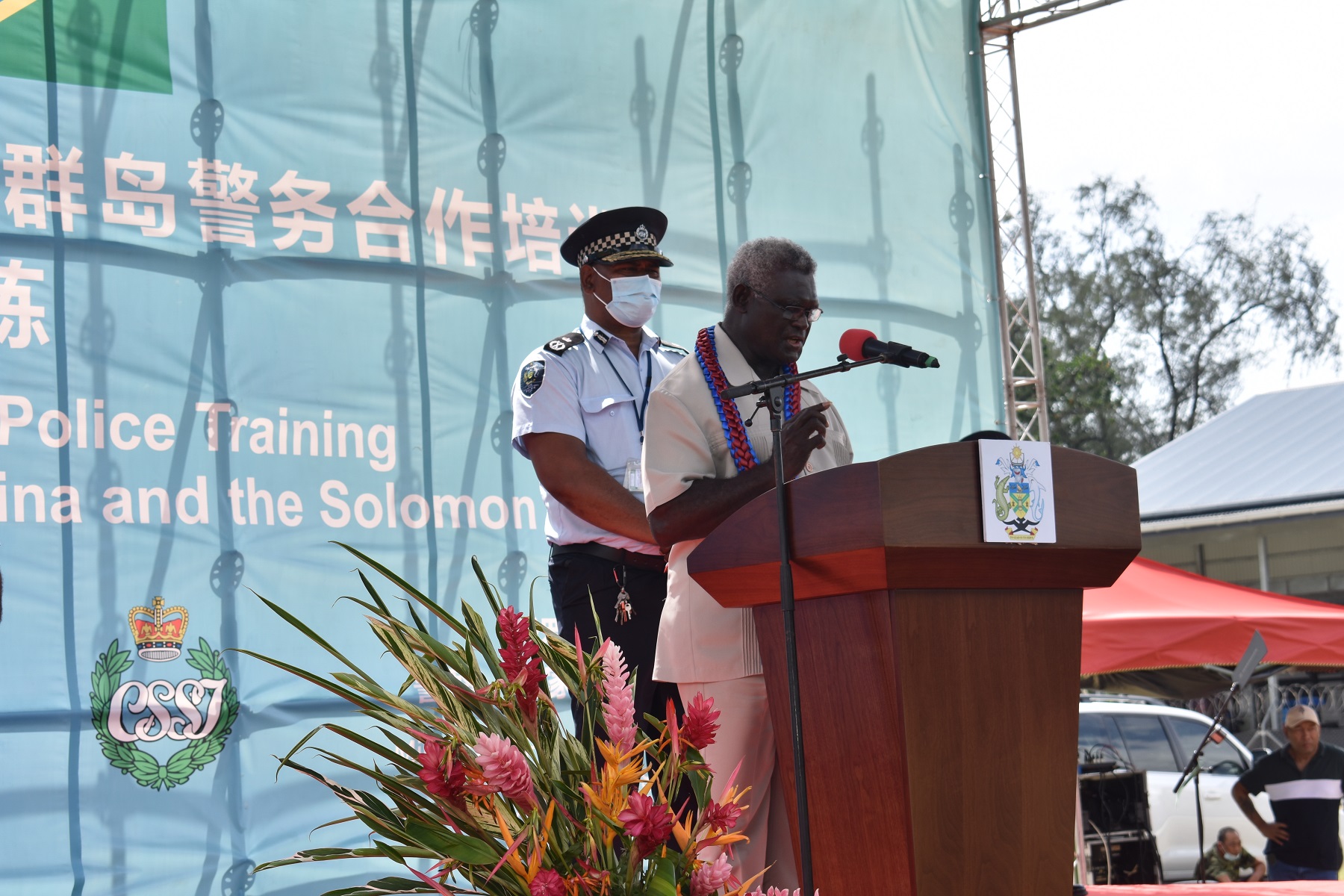