Decline in Honiara and Noro CPI

Movements in the price levels recorded in provincial towns such as Honiara, Auki, Gizo and Noro continue to have an impact on the change in the country’s Consumer Price Index (CPI) or national inflation.

The report shows that Honiara and Noro towns recorded negative inflation (deflation) while Auki and Gizo recorded inflation rates of less than 2 percent for the months of November and December, 2020.

In Honiara and Noro, the deflationary price changes have been mainly driven by movements in the prices of Food and Non-Alcoholic Beverages; Alcoholic beverages, tobacco and narcotics; Housing, water, electricity, gas and other fuels; and Furnishings and maintenance and Transport.

In Auki and Gizo, the inflationary price changes have been mainly been attributed to changes in the prices of Food and Non-Alcoholic Beverages; and Housing, water, electricity, gas and other fuels. 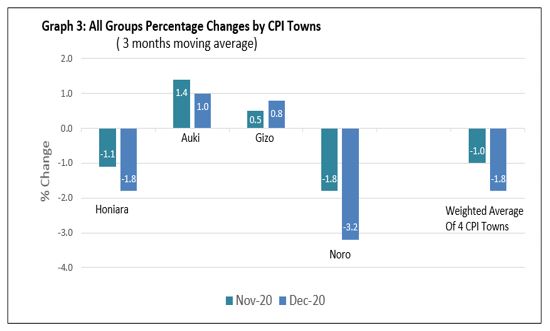