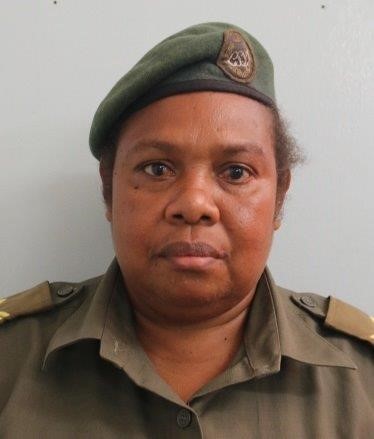 The service for Sgt Clerah Penibanga who died at the age 49, was held at the All Saints Parish in Honiara, followed by a burial at Kola ridge cemetery

The Ministry of Police National Security Correctional Services of Solomon Islands my CSSI Executive and families across the country extend their heartfelt condolences to the husband, children and relatives of late Sgt Clerah Penibanga in Lipe village, reef Island Temotu province and Malaita province and elsewhere in the country

“Your support makes late Sgt Clerah Penibanga to be a leader in the CSSI organisation”. Says Manelusi

“On the 30th August 2014 she was promoted to sergeant, she work as the Prison Affairs as an Administration officer till her passing away. She served the CSSI, the Government and the people of Solomon Islands for almost 30 years”. Manelusi said

“I salute her for her well-done service. So long and farewell colleague. May her rest in eternal and blessed peace with the lord?”

The burial of late Sgt Penibanga held at Kola Ridge cemetery for final rest on the 23rd October 2021.