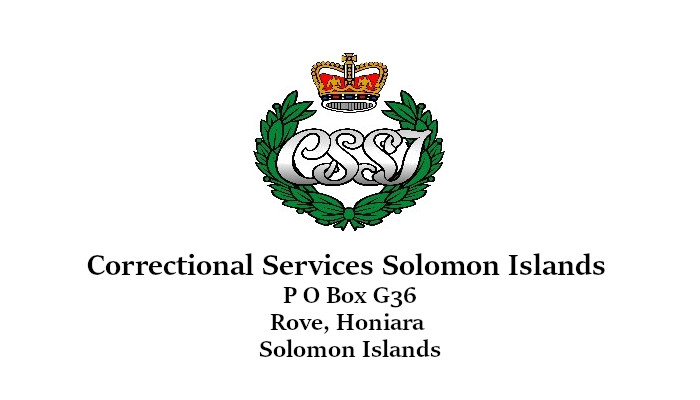 CSSI Roles- out Early Release of 65 inmates and three parolees 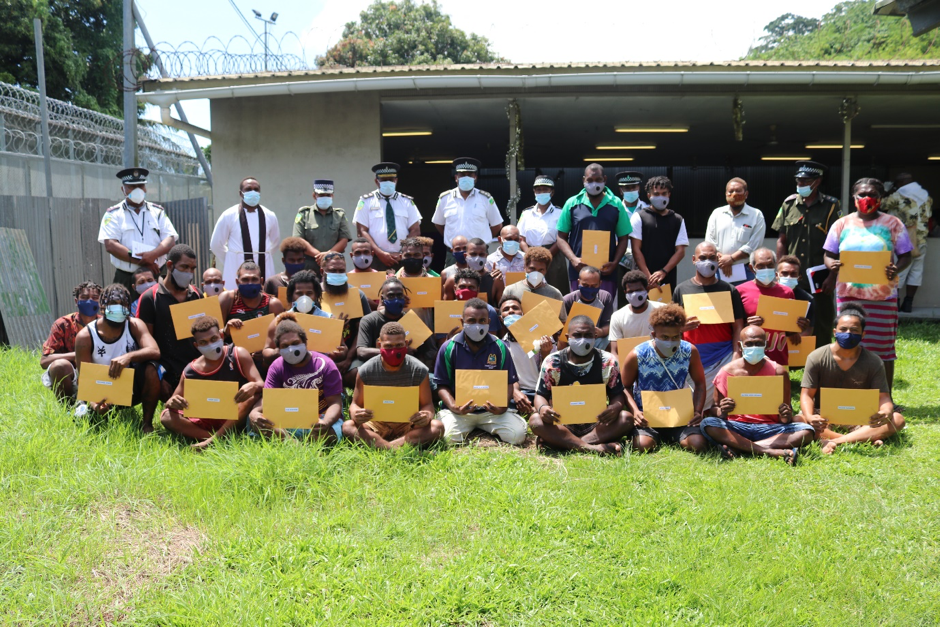 Commissioner and his executive with the thirty five Early Release inmates

Commissioner Correctional Services of Solomon Islands Gabriel MANELUSI formally announced released of three parolee made by the Parole Board meeting held toward last year 2021 after these three parolee fulfil all the requirements and this was endorsed by the Honourable Minister Hon. Anthony Veke, MPNSCS after received an Instruction from Attorney General Chamber’s office.

“Upon the recommendation of the Commissioner or the Parole Board, a convicted prisoner may be granted remission of the whole or any part of a sentence at the discretion of the Minister. In exercising the discretion, the Minister may consider the age, good conduct, mental or physical health and any other special circumstances of the prisoner.”

In making these recommendations Commissioner CSSI specifically emphasis the serious current emergent situation this country now finds itself in with the widespread community transmission of the disease known as COVID-19 and the particular variant being Delta that is spreading rapidly across the country.

Commissioner Manelusi said, it is important to note that Custodial environments are susceptible to COVID‐19 outbreaks given the confined conditions and potential for overcrowding and moreover, correctional centre populations are often more vulnerable, having poorer physical and mental health and other social challenges (eg, substance misuse, homelessness) compared with the general population.

“This situation and the vulnerable position CSSI and in particular our Correctional Centres finds itself in, with respect to trying to provide safe and secure environments for both officers and inmates to work and live in and very limited infrastructure to support best practise COVID-19 Protocols around health and safety requirements, necessitates this priority consideration of your esteemed Office”. Manelusi said

Manelusi said following supportive justification statements provided to the Honourable Minister Hon. Anthony Veke by the Commissioner CSSI, after Hon. Minster received an instructions from the  Attorney General Chambers Office stating the submission made by Commissioner CSSI was accordance to the 2007/2008 Acts and Regulations of CSSI for those inmates’ applications to Early Release on Licence Order

Commissioner CSSI recommended to the Hon. Minister Anthony Veke that all inmates being recommended for Early Release consideration those inmates had less than six (6) months left to serve of their remaining sentences, that all inmates have satisfactorily completed all Rehabilitation, Regeneration and Reintegration programs despite the challenges of the past two years with interruptions from COVID-19 to program deliveries to inmates in RCCC, that all inmates have demonstrated positive behavioural changes in their lives and are classified Low Security with positive case management reports in relation to compliance and supervision, that all inmates if approved for Early Release, have identified Reintegration strategies, and plans that are inclusive of thorough understanding of the current Emergency situation in Honiara and other provinces and that they have identified confirmed support if they are released and that the release of these recommended inmates will assist greatly in alleviating the current pressures being encountered in the centre with regards to high density of inmate numbers in most units and assist in being able to mitigate the possible introduction of COVID-19 into the centre, through the decrease in overall numbers and providing space to strategize future management options, such as isolation areas for inmates identified as at risk.

Commissioner Manelusi re-emphasis the very concerning situation currently in CSSI and the knowledge that we already have a significant number of officers who are unable to participate in official duties because of testing positive to COVID-19. Presently there has been a need to mobilise all official hour’s duty officers based in CSSI Headquarters (HQ’s) and place them in shift duties to RCCC. This leaves the agency significantly exposed in many areas of the operational and administrative functions, but we are managing as best we can presently, including continuing to provide support to quarantine and RSIPF combined operations.

The condition for parolees are; The Parolee must produce his order at the request of a Provincial Secretary, Police officer, Magistrate or Judge, The parolee must no commit any offence under SIs law, The Parolee before release from Centre must advice the Parole office where he will be resided and The parolee if he like to change address must notify the Parole office, beside that the parolee to return to his home residence, obey the law, no drug and alcohol use, comply with reporting and supervisor condition set to report to parole office on quarterly bases and no associated with former joint enterprise group which lead to commit offence

Manelusi reminds them when they return to their communities remember the three sources of law to help shape their life, the Divine Law, Customary Law and Constitution Law, among the sixty five inmates were two females and sixty three males.

Marking the release of three parolee and thirty five early release inmates; a thanksgiving service was held for the Parolees and early release at Saint Paul’s Chapel at Rove Central Correctional Centre in Honiara. The service was coordinated by Chaplain Inspt Fr. Reginald Tohutohuniu