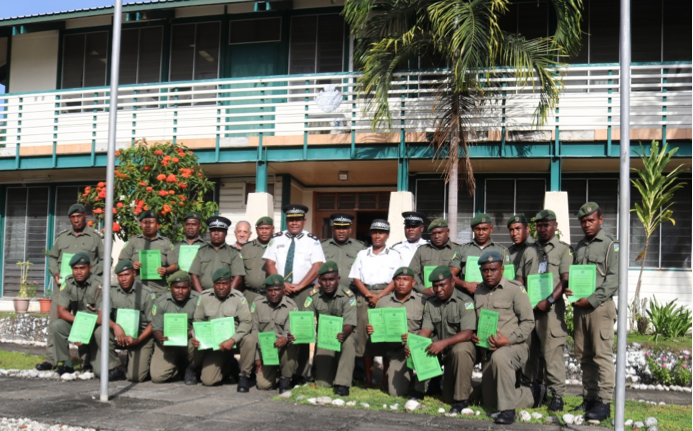 ERG officers pose for a group photo with CSSI Commissioner and his Executive after the official presentations.

CSSI Ranks and Files who witnesses the presentation of Certificates of Appreciation and Recognition of Service during the Commissioners parade at the Correctional Headquarter, Rove.

After their professional training, the twenty-five ERG personal were highly honoured.

Speaking during the parade, Commissioner Manelusi commended the ERG personnel for their tireless efforts rendered. Their commitment, dedication and courage resulted in them achieving an important objective of CSSI. This has also raised CSSR to become a highly credible, accountable and trusted disciplinary organization.

Commissioner Manelusi thanked the Overall In charge of ERG and Team members for their professional conduct during the training. Their demonstrations with PRC, PRT & AFP helped to enhance the organization’s training capacity and capability.

He then reiterated that the Government officials and CSSI Executive staff highly commended and valued their performance based on the skills and tactics displayed.

The Commissioner duly acknowledged the presence of Deputy Commissioners, Assistant Commissioners, Commandant, Directors, Advisors, Sir Waena Recruits, Ranks and Files for their ongoing support and commitment to the organization.

This week’s Commissioner’s parade was indeed highlighted with the presentation of certificates to the ERG officers.