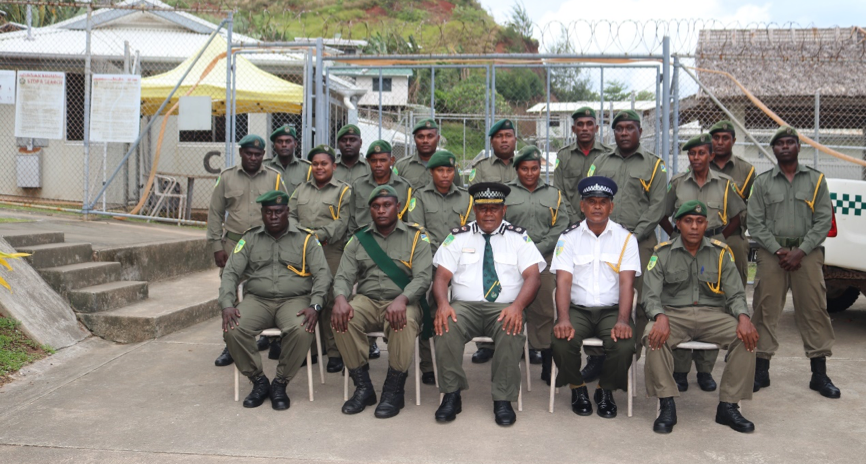 On August 18, 2022, Commandant and staff of Gizo Correctional Centre (GCC) in Western Province received a special visit from the Commissioner of the Correctional Service Solomon Islands (CSSI) Gabriel Manelusi.

While in the Province, Commissioner Manelusi had a meeting with GCC management and staff to discuss and update his officers on the signing of MOU with JOGOS construction on the Gizo Correctional Centre Landslide Restoration Works Project 2022 (CTB C11/22) Western province.

The Commissioner raised to the staff, their capacity and capability to manage the scheme of services, succession plans, training for officers and more so, the Corrections infrastructure development plans.

Key priority areas that focuses and collaborates with the national government policy was also highlighted. The GCC management and staff were encouraged during the muster to maintain a high level of discipline and professionalism that was notably displayed in honor of his special visit.

Also on this official visit, Inspector Harry Ama was promoted by the Commissioner to the rank of Superintendent as the Commandant of Gizo Correctional Centre.

GCC Commandant then thanked the Commissioner for his special visit to the Centre and more especially in response, the moral support rendered by his Executive officers.

CSSI Commissioner also acknowledged and thanked the Commandant and staff who mounted the parade and also their good work mandated as part of their responsibility.

GCC work performance and professionalism were spoken highly of by the Western Provincial Government.