CSSI Commissioner and his Executive pose for a group photo with Australian High Commission officials and the Australia Solomon Islands Justice Program staff during the handing over of Certificate III Correctional Practice.

CSSI has achieved the updating of Certificate III in Correctional Practice syllabus and is now at its implementation phase, with the commencement of the ‘Sir Nathaniel Waena Recruits 04/2019’ on 30 May 2022. The syllabus’ is based on relevant roles of individuals which provide foundation skills for working in Correctional facilities with an added focus on preventing reoffending. 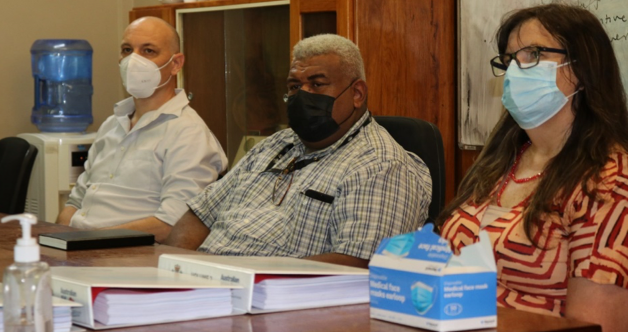 The Certificate III in Correctional Practice project commenced in March 2021 with a Technical Adviser being engaged remotely to help our Correctional Service Training Centre staff to review the current Training Materials for their new recruit training program.

In September 2021, continuing under a remote working arrangement, with the technical adviser being based in Australia, the Training for the Trainers commenced in the new learning materials and the inclusion of new units which focus on Rehabilitation, Regeneration and Reintegration, (3R’s).

During this informal ceremony, Australian High Commission Officials also handed over three (3) new computers to CSSI for assisting the professional development of all staff. Access to the computers will aid our online learning capabilities and help students who are studying their Diploma of Correctional Practice, which is facilitated by our long-standing partners Queensland Correctional Services, attend to their assessments.

CSSI is committed to the professional development of their staff in ensuring that all student has access to computers as a training resource purposely to help with study and assessments that relate to their role at CSSI.

CSSI Commissioner Gabriel Manelusi, thanked the Australian Government as our funding partners and our devoted partners of professional development in our Country, and for taking the time to listen and make things possible and lastly, the Commissioner gave appreciation to Queensland Corrective Services with their unwavering and continued support of professional development across the pacific.

The Certificate III in Correctional Practice comprises of 16 units and is an ongoing program supported by the Government of Australia.