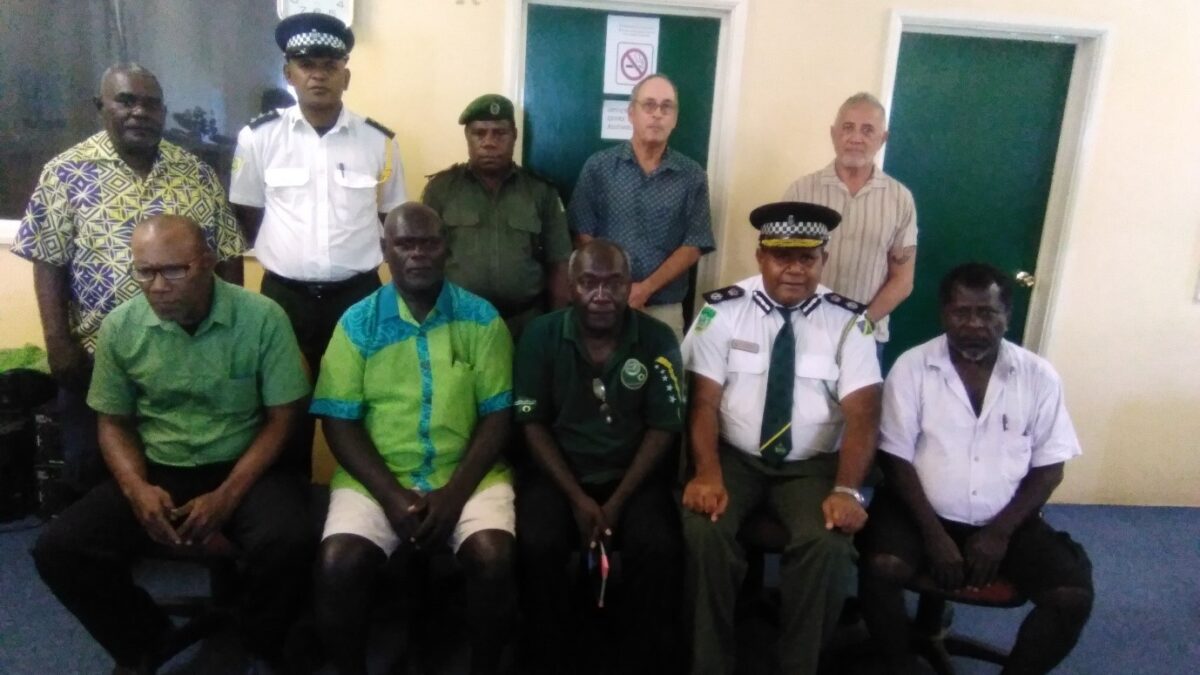 On Wednesday 20th October 2021, the Commissioner Correctional Service of Solomon Islands (CSSI) Mr. Gabriel Manelusi and his Official Party travelled to Gizo to meet with representatives of the WPG Executive, being the Deputy Premier, the Deputy Provincial Secretary, and the Provincial Minister for Women and the Minister for Infrastructure and Planning

“The purpose of this consultation is to provide an update briefing of developments being undertaken by CSSI to assess and determine the best possible ways to address issues of hillside land erosions and slippages on land owned by the Provincial Government where the Premier Western Province resides and land adjoining this, being land owned by CSSI.

This meeting was sought by the Commissioner following the completion of extensive investigations and assessments by technical expert Geotechnical and Civil engineer consultants, resulting in comprehensive reports on historical information’s and data’s, the current status of presenting issues on the site and most importantly, recommendations by the Civil Engineer, in consideration of the Geotechnical Engineers report, on how to remediate the current issues to make the site safe for the Premier’s residence and CSSI persons below this residence who have to live and work in the vicinity of the erosions.

” Being grateful for the Provincial representatives making themselves available for this important briefing and the ongoing support the Western Province Government has provided to CSSI in the past and currently in these present COVID-19 challenging times”. Says Commissioner Manelusi

Commissioner Manelusi said this particular project was of the highest priority for CSSI in terms of development needs and also in terms of safety and security to the centre and the community of Gizo.

He emphasised how the completion of this important milestone by the technical consultants has been achieved through early positive engagements with the Provincial Government and most importantly, the committed funding of this activity within this project, as provided by the Australian Government.

“In presenting to the Western Province representatives the completed Civil Engineer Report, Commissioner Manelusi requested urgent consideration and advice on seeking the approval from the Western Provincial Executive to proceed in progressive remedial activities.

“This would primarily be a program of procurement to seek tenders for a recommended works program, and pending all appropriate approvals progressing positively, a possible works program on site to commence in the early part of the second quarter of 2022, when the seasonal weather patterns are believed to be more suitable”. Manelusi said

The (WPG) Deputy Premier Paul Lepese thanked the Commissioner and his officials party for travelling to Gizo to undertake this important consultation engagement and recommended in relation to procedural process, for the relevant reports, technical drawings and supporting documentations to be tabled through a submission to the Western Province Planning Committee and once this is received, promised through the appropriate government processes, a timely response on the submission.

The Deputy Premier and Deputy Secretary both emphasised the commitment of the Provincial Government in relation to supporting the need to address this risk in the location of the Premiers residence and the Correctional Centre of Gizo and committed to any other support that may be needed within their means.

Commissioner Manelusi acknowledged the Provincial Representatives, also provided a briefing on the priorities of CSSI as they mean for Gizo Correctional Centre and the Western Province

CSSI Commissioner emphasised a commitment to work strongly going forward on development activities focused on safety and security of the centre and community and on the Rehabilitation, Regeneration and Rehabilitation of inmates, in relation to longer term plans for such in the Shortland Islands and other locations across the west.

Meanwhile Manelusi also undertook Official Duties for an Official Parade and Muster of all correctional staff at the Gizo Correctional Centre in the morning of Wednesday 20th October 2021, prior to his meeting with the Provincial Representatives. He followed up this activity with an hour long briefing to all staff and answered questions presented, reminding all of the responsibilities placed on them in carrying out their respective roles

Manelusi encouraging all to keep up the very good work being undertaken, both in the centre and especially community when conducting escorts to the courts and asked all to be prudent and professional in a time when there are major challenges for all to work through.

Commissioner Gabriel Manelusi and his Official CSSI representatives retuned back to Honiara on the same day and is processing a complete Submission on this Project need through to the Western Province Infrastructure Planning Committee Chairman early next week, for due deliberation and approval.