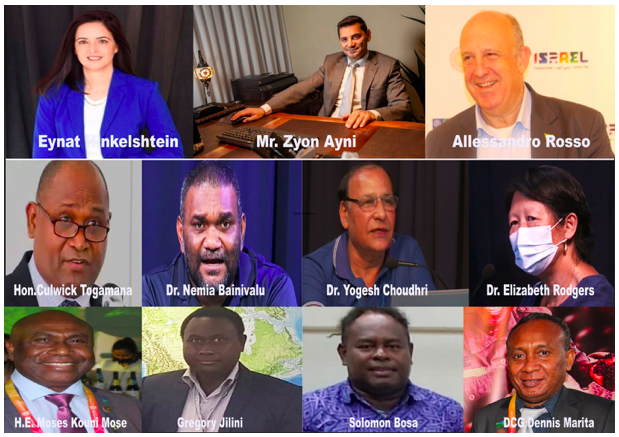 A screen shot of officials during the virtual meeting

Commissioner General Ambassador Moses Kouni Mose, at the conclusion of a Virtual meeting between the Solomon Islands and Code Pharma officials on Wednesday 23rd February 2022, has praised the initiative taken by the Israeli Company in the production of Codivir, an innovative new drug that appears to have the potential to revolutionize the fight against the Coronavirus pandemic.

In welcoming the participants to the virtual meeting, Mr. Alessandro Rosso said that Code Pharma was committed to maintaining its engagement with the Solomon Islands as it believes that they have the outright medical solution to cure and avoid deaths.

Mr. Rosso added that Code Pharma had completed its Phase 1 clinical trials in Brazil, South Africa, and Italy, of which results had shown that those who were affected, were able to continue with their normal lives within 48 hours and without any side effects.

Chief Executive Officer, Mr. Zyon Ayni said that it was through Expo 2020 that Code Pharma had initiated to approach and nominate the Solomon Islands as the gateway to other neighboring regional countries where the drug Codivir could be first tested.

Minister for Health Hon. Culwick Togamana welcomed Code Pharma’s proposal however the use of the drug in the country will need to be approved by the special committee who in turn will advise the Government on what decision to make.

CEO Mr. Ayni said that during its clinical trials, Code Pharma had discovered that the peptide had a direct antiviral effect against SARS-CoV-2, the novel Coronavirus causing COVID-19. In-vitro studies conducted at the British virology research laboratory Virology Research Services in London then demonstrated potent antiviral activity against SARS-CoV-2 and other RNA viruses.

Subsequently, the phase I clinical trial of Codivir in patients with COVID-19 was approved in Brazil by the National Research Ethics Commission (CONEP). The trial was conducted at Casa de Saúde – Vera Cruz Hospital in São Paulo, Brazil, with Dr Florentino Cardoso as the principal investigator.

The results of the study showed that Codivir had a high safety profile while significantly suppressing viral replication in most of the fully assessed patients with an antiviral effect noted as early as three days. All patients recovered quickly after the treatment with Codivir and didn’t show any signs of side effects very often associated with COVID-19 infections.

Mr. Lasssandro expressed his appreciation to the Solomon Islands participants adding that Code Pharma was committed to forging this partnership forward.

CG Mose thanked the participants for their contributions and mentioned that the Solomon Islands will await a formal proposal from Code Pharma through the relevant channels before a decision is made on the use of the drug in the country.