The Ministry of Agriculture and Livestock (MAL) through its Biosecurity division has recommenced its clean-up operation in Honiara to control the deadly Coconut Rhinoceros Beetle (CRB) that is threatening the country’s coconut industry and other palms.

Work was briefly stopped due to the Covid-19 pandemic recently but once more resumed last week.

The clean-up exercise will see MAL Biosecurity officers visited infected sites in the coming days and weeks to cut down dead coconut trees, chopped trunks into smaller sizes and transported to disposal sites for burning.

Permanent Secretary for MAL, Ethel Tebengi Frances said that besides the ongoing SIG funded work on the CRB, MAL was able to secure an NZ 1 million funding support from the New Zealand government in 2018.

“Implementation was impacted by COVID-19 but MAL is hoping that work will be completed within the next 50 days. MAL was very fortunate to successfully secure further NZ 2 million funding from the New Zealand’s MFAT last year 2019. This new funding proposed for the next two years will be expedited soon.

“The communication work on the CRB is being supported by the Australian Government through its Strongim Bisnis Project here in the Solomon Islands,” the Permanent Secretary said. 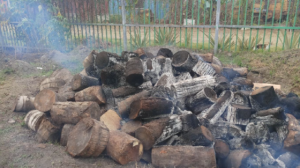 Chopped coconut trunks being burned at the disposal site.

Mrs. Frances thanked the New Zealand Government and Australian Government for their continuous funding support and commitment towards MAL national programmes and development aspirations of the country.

The CRB work was impacted by the Covid-19 travel restrictions, however, the Director of Biosecurity, Francis Tsatia said that since the Covid-19 is now easing its restrictions MAL decided to restart the operation last week and will continue for the remaining part of the year.

Mr. Francis added that a number of youths has been engaged to support with the cleanup campaign around Honiara and Guadalcanal province.

“For the next 30 days, dead palms will be cut down, trunks chopped into smaller sizes and transported to disposal sites for burning. Breeding sites and potential breeding sites are also earmarked for the clean-up operation.

Director Tsatia urges plantation owners as well as Honiara residents to remove and dispose dead palms should they find it in their areas.

He added that MAL Biosecurity officers will continue to monitor trappings and carry out surveillance over infected areas.