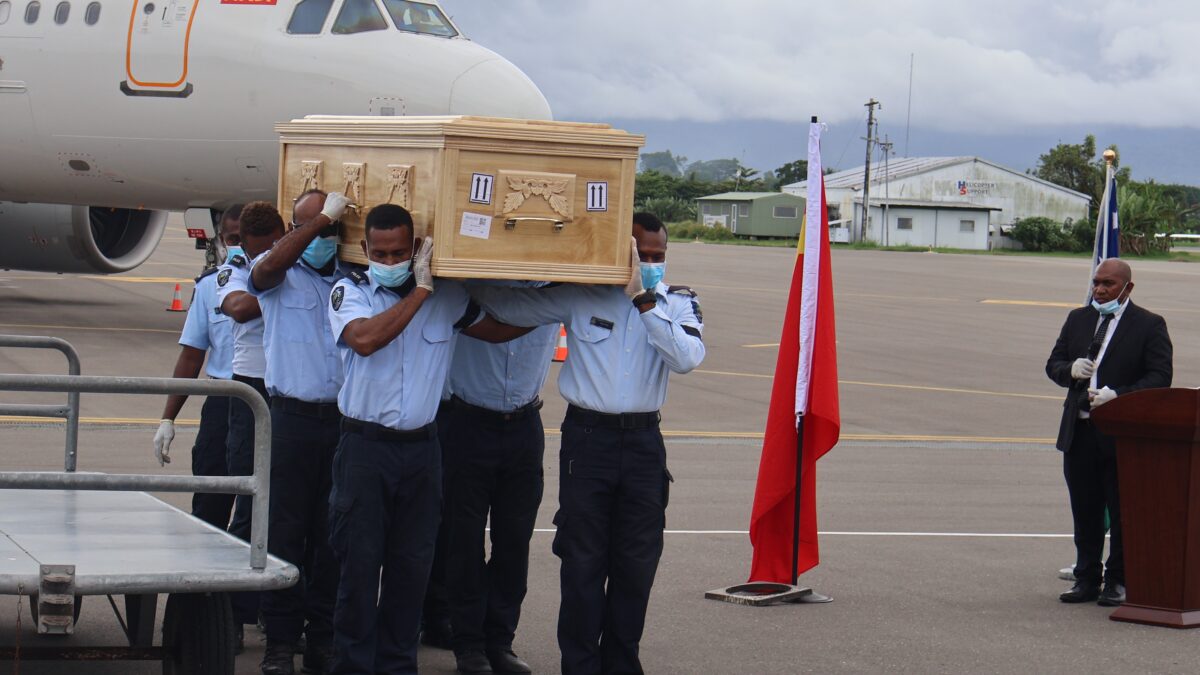 The National Government has formally received the Casket of Solomon Islands Ambassador to the People’s Republic of China, His Excellency the late John Moffat Fugui this afternoon.

The body of his Excellency the late Fugui was transported home on a special chartered flight from Beijing.

Prime Minister Sogavare presenting his remarks at the arrival of the Casket of the Late Ambassador John Moffat Fugui.

Speaking at the ceremony to officially receive the casket at the airport tarmac, Prime Minister Hon. Manasseh Sogavare thank the government and people of the People’s Republic of China for the support and assistance rendered in bringing back the body of our late Ambassador.

“I convey my sincere thanks to Ambassador Li Ming and your hardworking staff who have worked tirelessly to ensure all the logistics and transport arrangements are in place,” said Prime Minister Sogavare.

The Prime Minister further extended his appreciation to the hardworking staff of the Ministry of Foreign Affairs and External Trade and the Solomon Islands Embassy in Beijing for their efforts and commitments over the past days to ensure the repatriation arrangements are smooth and forthcoming.

……..”I join you all as we grief the loss of one of our leaders, the late Ambassador John Moffat Fugui, whom our good Lord has called to rest on the 22nd of December 2022 in Beijing. I pray for God’s healing, blessings, comfort and strength to be upon the immediate family and relatives of the late Ambassador.”

The Prime Minister, on behalf of the government and people of Solomon Islands also convey through Madam Fugui and children and relatives and extended family members the country’s sincere gratitude for the service that the late Ambassador have rendered to this country throughout all his public service life.

“We thank our almighty God for the life of this wonderful man, and pray that the legacy he left for us will continue to be a shining light in our country’s nation building.”

Prime Minister Sogavare also formally handed over the body of the late Ambassador to his family and relatives.

….”I on behalf of the Government, humbly handover the body of the late Ambassador John Moffat Fugui to you Madam Jennifer Fugui, children, family member and relatives and pray that God’s sympathies will be with us, as we spent these final moments with our father, brother, colleague and good friend.” 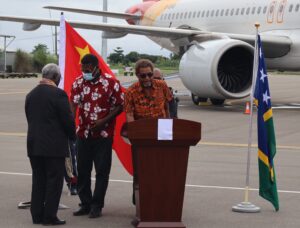 “Ever since he took office as Solomon Islands Ambassador to China in May 2021, Ambassador Fugui earnestly performed his duties and worked diligently to promote in-depth development of our bilateral relations and cooperation in various fields, while continuously paying effort to consolidate the friendship between our two peoples,” Ambassador Li Ming stated.

“I think, that is also a manifestation of the special friendship between China and Solomon Islands and the profound sentiments between our two peoples.”

The official funeral Service of the Late Ambassador will be held at the St. Barnabas Anglican Church on Thursday 29th December.