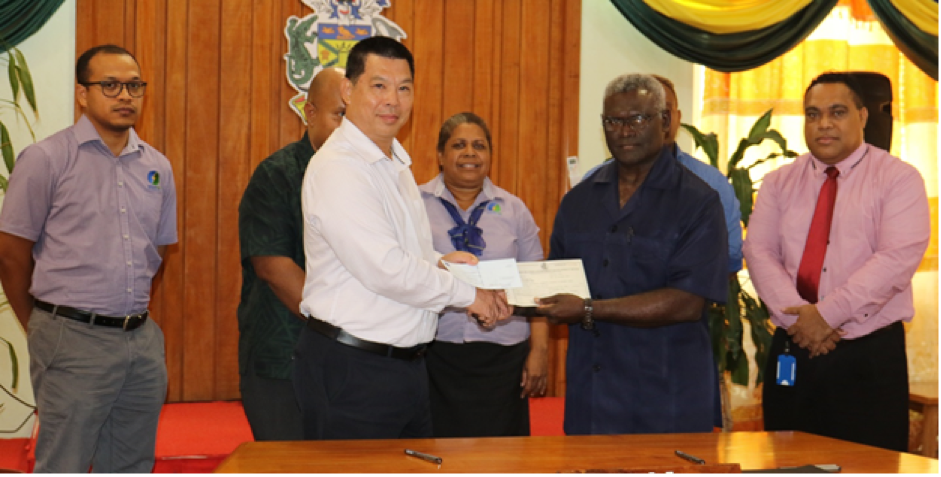 The signing ceremony was made between the Prime Minister and Acting Minister of Finance and Treasury Hon. Manasseh Sogavare and the Governor of the Central Bank of Solomon Islands (CBSI), Dr. Luke Forau on behalf of the Government and the Board Chairmen and respective CEO’s of Solomon Power and the SI Ports Authority to formalise the agreements.

Hon. Sogavare thanked both SOE Boards and CEO’s for their decisions to take part in the Government’s efforts to finance the 2021 Development Budget, through the Government Bond Market.

“The promotion and development of the Solomon Islands Bond Market is one of the key directions of the current DGCA Government’s policy in developing our financial system and services. There is much room for development in this sector, and there is a role for every stakeholder to play in realizing this common goal,” Sogavare said.

The decision by the two SOEs to purchase the SI Government Bond has provided great momentum to promoting the growth and development of this market.

According to Sogavare, the SI Government Bond market is an important investment opportunity for everyone in the country that have the financial resources to do so.

In the past, only the commercial banks and NPF have invested in the SIG bond market. But the SIG Bond Market is for everyone including the banks, NPF, private businesses and State Owned Enterprises (SOE’s).

The Board and Management decision to purchase the SIG Bonds is the outcome of Governments SOE reforms in the past.

As a result, Government had decided to introduce the SOE Act to ensure there is good governance and management in all our SOE’s.

The decision to purchase and invest in the Governments Bond market is a clear positive testimony of SOE reforms in the country.

Furthermore, the Bond Purchase Agreement Signing Ceremony by both Solomon Power and Solomon Islands Ports Authority signify and reflect the strong leadership and governance of both the Boards and Management team of both SOE’s.

The Prime Minister further assured the Chairman and Management Team of both SOE’s that government will use their investment funds as part of government’s efforts promote further economic growth and development in the country.

In the long run, this growth should be able to trigger further financial and economic benefits, not only to the country, but to both SOE’s as well.