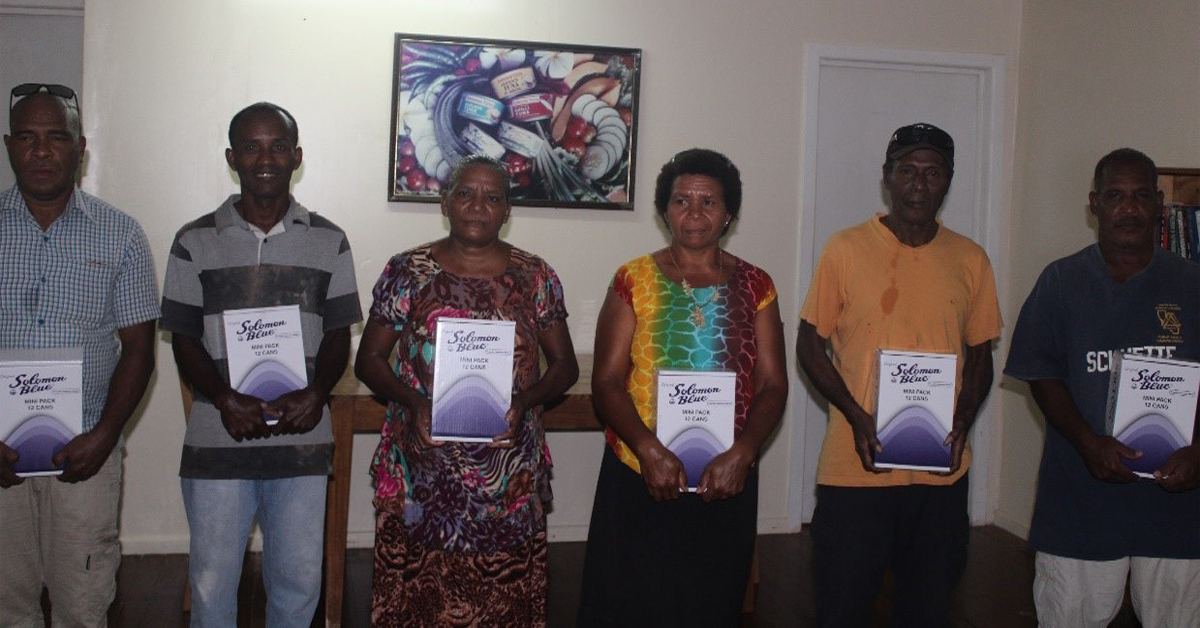 Last week the Bina Harbor Tuna Processing Plant Project land trustees had a three days study visit to SolTuna at Noro, Western Province. The trip was arranged by the Ministry of Fisheries and Marine Resources on the invitation of SolTuna.

The purpose of the visit was to make Bina landowners further aware of the implications of hosting the nation’s second tuna processing plant within their community.

The visit forms part of collaboration between MFMR and SolTuna to provide support to Bina land trustees with capacity building and more importantly to help them build awareness of Bina potentials. The tour is also an evident with a number of milestones that the project has reached recently.

On the first day of their visit the Trustees met with senior officials of National Fisheries Development (NFD), which is SolTuna’s primary provider of fish and were privileged to observe the unloading of tuna catches from both purse seine and pole line vessels. They were briefed on NFD operations and impressed by the fact that nearly all NFD workers, both on shore and at sea, are Solomon Islanders.

The delegation then met with the SolTuna management team and after a short orientation and safety briefing were privileged to be taken on a tour of SolTuna loining and canning operations.

The delegation also visited Solomon Islands Ports Authority, Noro, and later toured Noro township, SolTuna staff accommodation, and at the processing plant’s water source. The tour of Noro and conversations with SolTuna workers and others enabled the Trustees to see how Noro Town has grown around the SolTuna and NFD operations.

When asked the trustees about the visit trip, they have responded that the visit was dubbed as a fruitful visitation, looked into ways of strengthening cooperation between the MFMR, SolTuna, NFD, and Solomon Islands Ports Authority of Noro. Beside this, the tour will help us build a comprehensive awareness around Bina project potential opportunities for Bina communities and beneficiaries.

The delegations also inspired from the motivational talks given by the senior officers of NFD and SolTuna.

SolTuna Chairman, Adrian Wickham, addressed the delegation during the visit. He pointed out that the Bina Harbour project has the potential to create jobs, and education and economic opportunities for locals, such as the supply of goods and services to the plant and its workers.

He said too that a major tuna processing operation will contribute to national income and could help unite the country’s diverse cultures through a single enterprise.

Hearty Marumaru, a senior SolTuna staff member shared similar sentiments with the Trustees. He said the Bina project will definitely transform the lives and livelihoods of many people. It will undoubtedly provide food security locally, regionally and internationally, so the host should grab the opportunity, hold it, nurture it, and implement it.

The Trustees finished their visit full of new ideas and hopes, and determined to take a very positive message about the benefits of hosting a tuna processing plant operation back to their communities.