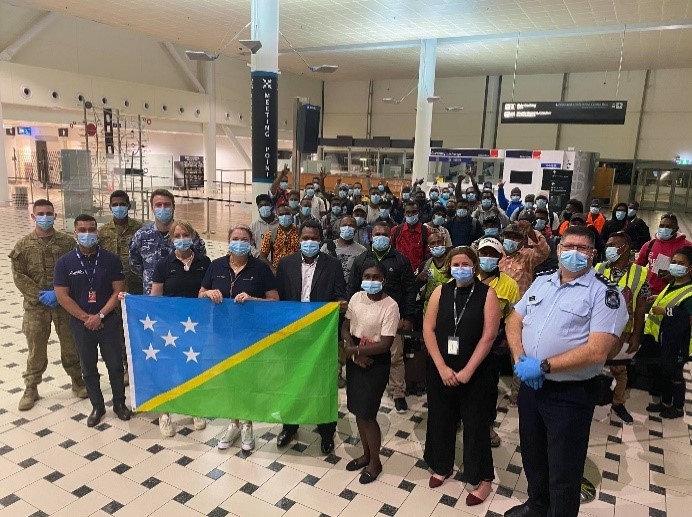 The first 173 Solomon Islands workers to enter Australia since the COVID-19 lock- down in March 2020. They arrived in November last year and since then their numbers have been increasing to reach 1,662 of as last month.

Australian Government new agriculture visa arrangement with Asian countries is a concern for the Solomon Islands.

During a panel discussion this week at the Australian National University (ANU) Crawford Leadership Forum in Canberra, Solomon Islands High Commissioner to Australia, Mr. Robert Sisilo was worried that the new visa may undermine the Seasonal Workers Programme (SWP) and the Pacific Labour Scheme (PSL).  Since their resumption last September, both programmes have landed 1,662 workers (1,390 men, 272 women) in Australia as of last month.

Australian Government announced last month it’s new agriculture visa to address workforce shortages in the agriculture sector.  It will be available to Asian skilled, semi-skilled and low-skilled workers across a range of agricultural industries (including meat processing), and the fishery and forestry sectors.  Besides jobs, the visa may also pave the way for permanent residency pathways and regional settlement.

Mr. Sisilo said it’s a government decision so we respect hoping its terms and conditions will mirror those of the SWP and PLS.

“And just to be fair the option of permanent residency and regional settlement should also be considered for the two programmes,” the commissioner who puts labour mobility and trade with Australia as his number one priority since he was posted to Canberra in January last year, said.

Mr. Sisilo was among three other panellists – the Minister for International Development and the Pacific, Zed Seselja, and the High Commissioners of Samoa and Vanuatu – discussing the topic ‘Renewal in the Pacific’ with speakers zooming in from all parts of Australia and the globe.

“The age limit and areas of coverage need to be revisited.  Under the current arrangements, only those between the ages of 21 – 45 can apply.”

“This should now be reviewed upwards to 55, especially in the PLS since most of our matured workers with the right skills; and experience fall within that age range.”

“It’s also about time to include the cities where the demand for skilled and semi-skilled jobs like aged care, construction, plumbing, fishing, hospitality and more is in abundance,” Mr. Sisilo pleaded.