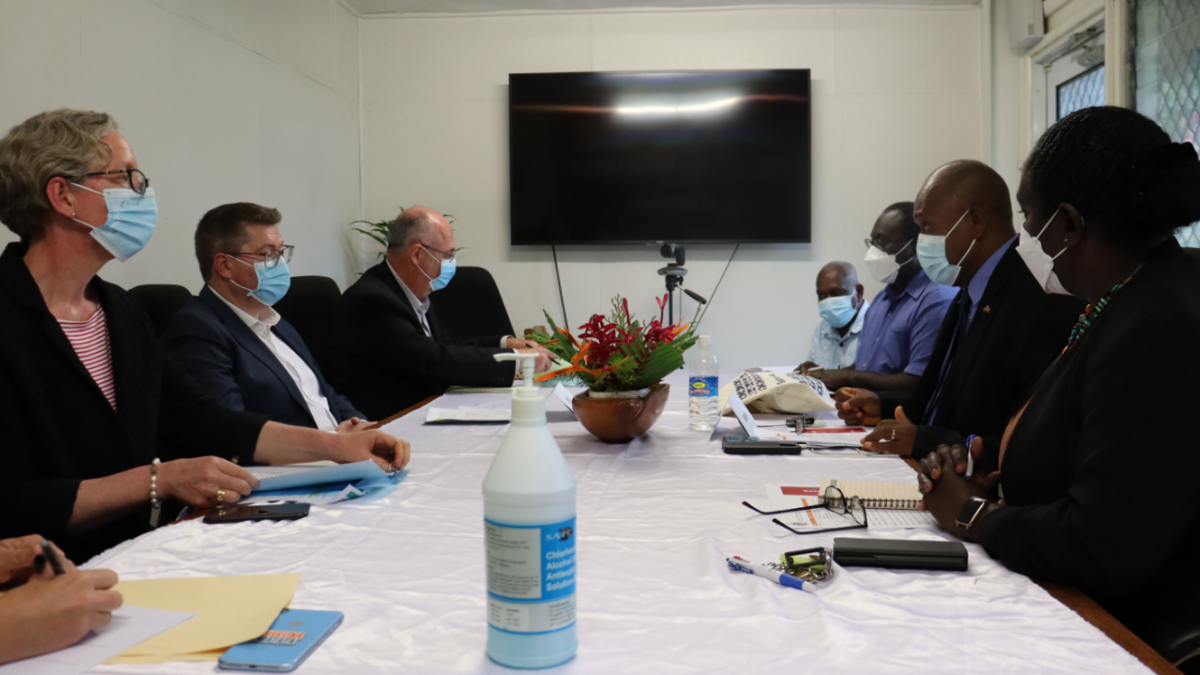 Hon. Pat Conroy MP (Centre left of the table) and his delegation & Health Minister Hon. Dr Culwick Togamana (Centre right of the table) with health officials during the courtesy visit.

AUSTRALIA PRAISED FOR ITS SUPPORT TOWARDS SI HEALTH SECTOR

At the meeting, Dr. Togamana congratulated the newly elected Government of Australia under the leadership of Prime Minister Anthony Albanese, and Minister Conroy in his new portfolio. “It is with great pleasure that I express my sincere congratulations”, said Dr. Togamana.

He acknowledged the substantial financial support of AUD 70million (over SBD 400million) received to date as direct budgetary support and performance-linked funding, under the Ministry’s current Health Sector Support Program (HSSP3) 2016-2020. Since 2016 Australia has committed over AUD 143million (over SBD 818million) in support to the MHMS and Solomon Island health partners through the HSSP3 program.

Dr Togamana thanked the Government of Australia for the significant contributions toward the Solomon Islands National COVID-19 preparedness and response efforts including the vaccination rollout program both in terms of financial assistance to support operational and logistics costs, vaccine supplies, equipment and infrastructure support and technical support including deployment of the Australia Emergency Medical Team (AUSMAT) to the country.

The Minsters discussed the announcement by Ms. Penny Wong, Australia’s Minister for Foreign Affairs during her recent visit of Paediatric Pfizer COVID-19 vaccines for children 5 to below 12 years old. Issues and challenges with rollout and uptake were also highlighted during the Minister’s discussions. With the training for the vaccine administration finalized the Ministry is working with the Australian High Commission to complete the acceptance and planning process for rollout. Australia remains the largest contributor of COVID-19 vaccinations for Solomon Islands.

With the upcoming release of the new National Health Strategic Plan (NHSP) 2022 -2031 scheduled for launch in September/October 2022, Dr Togamana said that the Ministry is looking forward to working collaboratively with all development partners and other stakeholders to ensure the successful implementation, and ensure support is aligned to the Ministry’s strategic plan. As such, Dr Togamana asked Minister to continue to hold off on the design of the next phase of Australia’s support for the health sector until the new strategic plan was finalised.

Minister Conroy, expressed appreciation of the acknowledgements made by the Health Minister stating that “the Australian Government is here to listen to Pacific priorities and provide support where it is needed, Australia is dedicated to the implementation of the commitments we make.” Minister Conroy told Dr Togamana he was glad that Australia remained the health partner of choice for Solomon Islands and that Australia would continue to provide support to the health sector, including through Australia’s recent
AUD $1million commitment to upgrade the National referral Hospital’s Acute Care Ward.

Minister Conroy also expressed his deep sympathy to families, friends and the country on the passing of the former national leader and former Prime Minster Ezekiel Alebua.

The courtesy visit ended with exchange of gifts by the two leaders.