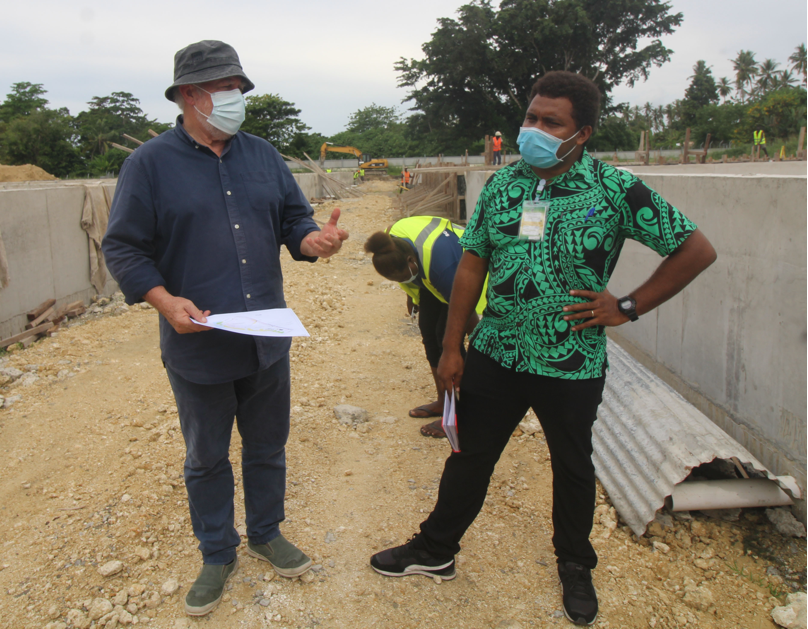 The solar farm at the Aruligo Tilapia Project

Ongoing progress at the Aruligo Tilapia Hatchery project in North West Guadalcanal has impressed New Zealand’s Acting High Commissioner when he visited the project site on Thursday 12 May 2022.

His Excellency Higgins attended the ground breaking ceremony three years ago when the site was static with overgrown trees and shrubs.

Speaking during the visit, Higgins said “it’s good to come back three years later, just to see how much has been done over the time that I have been away”.

“It’s a fantastic project, it’s good to see so much local expertise here and it’s a great partnership between New Zealand, the Solomon Islands government through the Ministry of Fisheries,” he said.

“There was nothing here, there were no tanks here, all this is grown up in the time that I’ve been away, you got the solar project here done by a local company which is really good to see its environmentally friendly, it’s good to see the ponds here with the local involvement and training of the farmers so very excited about the project. A lot of progress,” he said.

The New Zealand envoy said “it’s a project we can all be proud of and hopefully when our Minister comes here we can bring her here, as the project here is a concrete example of the work that New Zealand and Solomon Islands do together”.

Deputy Secretary Corporate Services, Mr Patteson Lusi who was on site to receive Acting High Commissioner and his staff praised them for taking time out to visit a major project funded by their Government.

He conveyed MFMR’s appreciation to the New Zealand Government and also for the invitation to be part of the team visiting the project at Aruligo.

Following a brief introductory session, the visitors were taken on a site visit to the ponds currently under construction, the solar facility and other structures followed by a brief by a local who is involved in breeding Mozambica tilapia species.