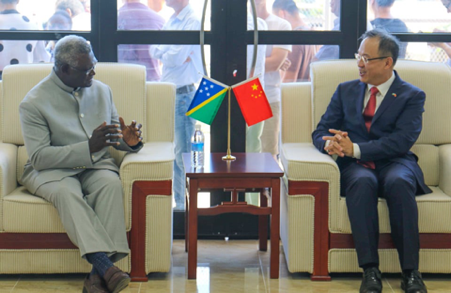 Prime Minister Manasseh Sogavare has paid tribute to the early Chinese traders for establishing trade links with China and Hong Kong during the colonial period.

Integrations and connections between the marginal Chinese groups in the Solomon Islands and its people can be traced back to the early twentieth century.

The entrepreneurship involvement of the Chinese community during those days and their trade and business connections had strengthened trading links between the Solomon Islands and the outside world.

With Solomon Island’s recognition of the One-China Policy and the establishment of Diplomatic ties with China, Mr Sogavare is confident that this relationship will further expand on the practical existence of trade links and the bond of partnerships shared between the Chinese community and the people of Solomon Islands.

The event is a milestone achievement that will go down in the history of Solomon Islands, as a sovereign nation. Similarly, this occasion reveals the commitment shown by both countries in an attempt to strengthen bilateral relations, practical cooperation and mutual partnership.

“I have confidence that with the formal opening of this Embassy, it will further craft and deepen the platform for enhancement and the strengthening of development and investment relations between our two countries,” Sogavare said.

The Prime Minister assured that the setting up of the Embassy in Honiara is a step forward for the Solomon Islands.

“I believe this partnership will strengthen the people to people diplomacy, commercial relations, facilitate transformative partnerships and enhance stronger bilateral ties between our two countries, and surely open up foreign investment opportunities that can be pursued looking forward,” he added.