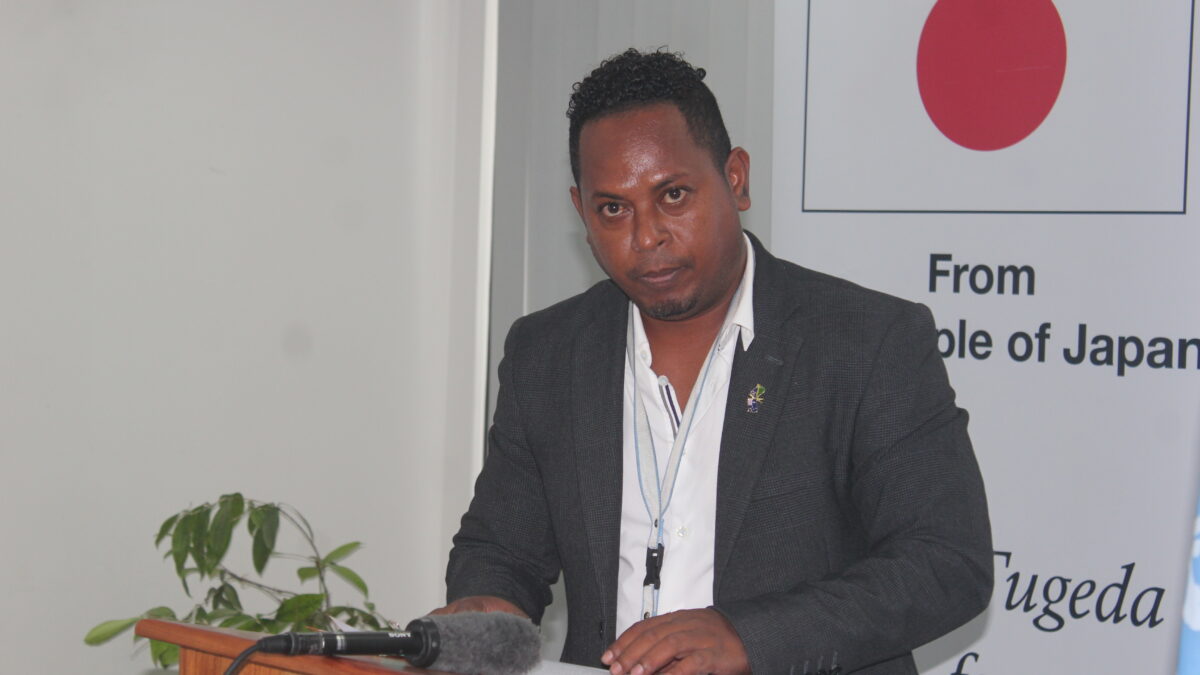 GOVERNMENT ADAMANT IN THE FIGHT AGAINST CORRUPTION.

The government acknowledges the funding support of the Government of Japan to the ongoing work of the United Nation Development Programme (UNDP) in supporting Solomon Islands effort to combat corruption in all forms.

The government of Japan provides SBD14, 540,000 through the UNDP and the Japanese Ambassador to Solomon Islands H.E. Murimoto Yasuhiro sealed the agreement with the UNDP Solomon Islands Technical Advisor Olga Rabade at the UNDP Office conference room in Honiara.

Speaking during the signing ceremony of the Contribution Agreement between UNDP-SI and the Government of Japan in Honiara on Friday 22nd, the Deputy Secretary to Prime Minister (DSPM), Dr. Derek Smiles Mane delivered the government’s commitment and leadership standpoint to assertively combat corruption in Solomon Islands.

Dr. Mane acknowledges that the Government of Japan’s timely funding assistance, through the Embassy of Japan, to UNDP-Solomon Islands office further indicates the cooperative commitment of all in partnership to support and further strengthens the efforts of the Solomon Island’s government to combat corruption in all its facets.

He pointed out that it is a concrete redirection policy undertaking by the present government to notably place combating of all forms of corruption, enhancing of stability, peace, protecting the country from Covid-19 and economic prosperity for all citizens as key pillars of its 2021 policy redirection.

“The government has also demonstrated its commitment to the international community on combating of corruption by adopting the United Nations (UN) Convention on Anti-Corruption (UNCAC)”, Dr. Mane stressed.

He pointed out that the national government is adamant that the task of eradicating corruption is essential for effective governance and crucial to poverty alleviation. It is to this end that the government has evolved a comprehensive National Anti-Corruption Strategy (NACs), a three pronged approach encompassing awareness, prevention and enforcement.

As a result, the government acted as it envisioned and established the Solomon Islands Independent Commission Against Corruption (SIICAC), a statutory body with the mandate to fight corruption.

Dr. Mane in hindsight also expressed that much has been demanded of SIICAC from within public circles to promptly commence work; however, he added that SIICAC is a highly technical and legal body that requires qualified and technical staffing in order to effectively carry out its important roles and tasks.

Adding that while it would certainly take some time for SIICAC to fully operate, what has been notable of government is that SIICAC has now been officially established, and the government has appointed its Commissioners and the Director General, who is Mr. John Kouni, a Lawyer by profession with many years of experience.

The Deputy Secretary to Prime Minister, Dr Derek Mane, explained that the government with the support of its development partners need to face the challenge of fighting corruption in an open and frank manner as the way forward to realize the shared commitment by all under the 2030 Agenda for Sustainable Development to ‘sustainably reduce corruption and bribery in all forms and strengthen the recovery and return of stolen assets.

“This holistic partnership approach is the hinge to achieve all other sustainable development goals, particularly Goal 16 of UN Sustainable Development Goals (SDG) which emphasizes human rights and the importance of strengthening institutions and governance to leave no one behind”, he added.

Dr. Mane stressed that all efforts to combat corruption would not be as effective as envisaged or materialize if corruption and weak institutions continue to fail government’s determination to effectively and efficiently respond to its citizen’s needs, citing that corruption is multifaceted with many faces which demands a concerted effort by all stakeholders such as businesses, development partners, churches and the civil society to collectively address and eradicate.

Meanwhile, Solomon Islands, like all other Small Island Nations have limitations and challenges to combat corruption, and as Dr. Mane stressed, “This limitations are numerous and pressing”.

The most obvious pressing issues include the technical expertise to holistically combat corruption, and the resources with which to upscale the fight.

And this is where the government will continue to partner with its development partners and international organizations such as the UNDP to share their knowledge and experiences, foster open and honest dialogues, and hold constructive discussions around the challenges to fighting corruption effectively.

It is the government’s hope that all stakeholders and development partners aligned resources and talents together with the government to weed out corruption in Solomon Islands.