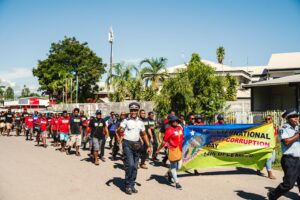 Honiara, Solomon Islands, 14 December 2022 – Solomon Islanders marched along with SIICAC, oversight and integrity institutions and citizens with a call to stop corruption.

Organized as part of the International Anticorruption Week, the march was held from Honiara City Council to the National Auditorium and was accompanied by the welcoming remarks by the Government and diplomatic corps and a panel discussion with the participation of directors and chairmen from DSE, oversight and integrity institutions.

Speaking at the welcoming ceremony on behalf of the Government, Mr. Philip Manakako, Assistant Secretary Policy and Programs at the Office of Prime Minister urged oversight and integrity institutions and the public to “unite against corruption.”

“We must work and walk together to defeat corruption. We must all be champions and take ownership of this fight,” he said.

Mr. Manakako further reiterated Government’s commitment to supporting SIICAC on “its work to revise the National Anti-Corruption Strategy” and strengthening anti-corruption legislation as “recommended by the country’s UNCAC implementation reports and other available recommendations.”

“Corruption is one of the greatest threats to our country’s development. A challenge to attaining our country’s desire to achieve Joy, Peace, Progress and Prosperity,” SIICAC Director General, Mr John Kouni emphasized during his welcoming remarks.

SIICAC Director General saluted and thanked partners, donors, and other stakeholders for this great milestone today as this was the first year where SIICAC is taking the lead as the “statutory independent body of the Government to lead international anti-corruption day celebration.”

“We are humbled to witness the display of willingness on your respective parts to be active partners in our common fight against corruption,” Kouni said.

“There’s not vaccination against corruption. Corruption is deeply rooted in people’s mind and it is not an easy task to address that. Yet, we may see that Solomon Islands become more resilient to address and tackle corruption,” H.E Miwa Yoshiaki said.

His Excellency British High Commissioner to Solomon Islands and Nauru, Mr. Thomas Coward emphasized that corruption is “massively damaging our homes, our communities, our societies, and above all, our counties.”

H.E Thomas Coward also reflected on the importance of working united as one. “There are new initiatives and there are many new things happening and they will only work when we come and work together on them,” he said.

“We all are making progress. We’re coming together and we’re driving change,” H.E Coward concluded.

With the 2030 Agenda as a guiding thread, UNDP aims to reduce corruption and develop effective, accountable and transparent institutions at all levels to ensure effective and timely achievement of national development outcomes.

The Anticorruption March was part of a series of events happening during the International Anticorruption Week and is organized by SIICAC and OPM Anticorruption Secretariat in partnership with three UNDP projects – Transparency and Accountability for the People of Solomon Islands – The Project for Strengthening the Capacities to Combat Corruption (TAPSCCC), the Strengthening Anticorruption, Transparency and Accountability in Pacific Island Countries (“Pacific Anti-Corruption Project”, Fiji) project and UN Regional Anti-Corruption Project (UN-PRAC) implemented by UNDP Offices in Solomon Islands and Fiji with financial support from Governments of Japan, the United Kingdom and New Zealand.